A quickie today, and it sure is a purty one. (We may have mentioned in the past that we dig purty pikshurs around here.)

Though we're not entirely sure, we here at TWW suspect that today's offering is somehow connected with 'Opération Chammal', the ongoing French campaign over in Camel-ville to rid the world of fanatical rag-headed religious extremist nut-jobs.

All we know for sure about this somewhat surreal photo is that it shows a pair of Mirage 2000Ds (some sources say 2000Ns) from SPA 75 of the Armée de l'Air. 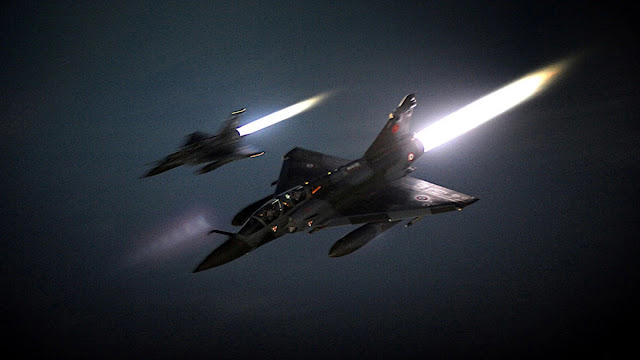 We may have mentioned once or thrice in the past that we've got a thing for aerial combat of a nocturnal nature around here. (After all, night-time is the right time.) Well, among the earliest books that your then-young blogmeister read while still a fledgling nut for things with wings was one titled simply, 'Night Fighter', by C.F. Rawnsley and Robert Wright.

That book caught your blogmeister's imagination and held it as tightly as any, and he has since read it again, numerous times. Matter of fact, so often have its pages been turned, that old paperback is now on the verge of falling to pieces.

Anyhoo, 'Night Fighter' is a wartime memoir; that of Cecil Frederick 'Jimmy' Rawnsley. It's also largely the story of one of the more successful aerial collaborations of the Second World War; that between Rawnsley and his pilot, John Cunningham. The two were pre-war members of 604 (County of Middlesex) Squadron of the Auxiliary Air Force, which was in those early days flying the Hawker Demon. Rawnsley started off as a seemingly ground-bound aircraftman, but soon finagled his way into the back seat of a Demon, something which he managed more and more often, eventually training to become an air gunner. As 604 Squadron's mission changed from that of a day-time fighter outfit to night-time, Rawnsley again trained for a new job; that of radar operator. The Squadron's equipment also changed, first to the Bristol Blenheim, which was outfitted with some of the early AI (airborne intercept) radar sets and flown as an ad-hoc night fighter, then to the Bristol Beaufighter, a type that was built specifically for the purpose. Ultimately the outfit would transition to the fabled de Havilland Mosquito, as would 85 Squadron, the outfit with which the pair would fly their last tour in night fighters together. Cunningham ended the war as one of the most successful RAF night fighter pilots, scoring twenty victories (one during daytime), and Rawnsley was there for most of them.

Success rarely comes outright, however, and many a page of the book tells of the frustrating struggle to develop the equipment, operating procedures, and tactics involved in conducting early night fighter operations over England. Your blogmeister found all of this to be rather enthralling, but it was the parts of the book that dealt with the Beaufighter which truly had his imagination off and running.


Here's what 'yer typical Beaufighter from 604 Squadron looked like. This is Beaufighter IF T4638, 'F for Freddie', finished in the oh-so attractively ugly 'sooty' black paint scheme typical of British night fighters of the period, and equipped with the Mk.IV AI; note the aerials on the outer wings and that just visible on the nose. 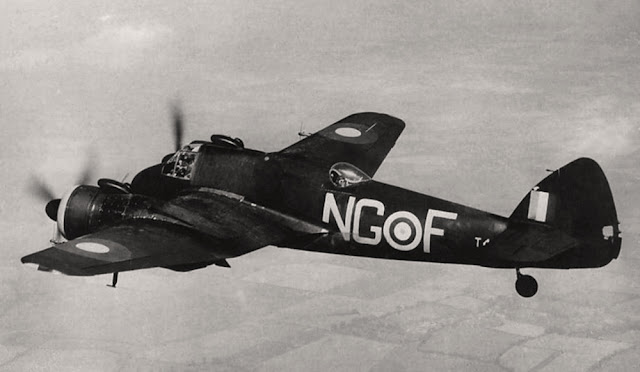 Here's the duo in question, 'Jimmy' Rawnsley on the left, and 'Cat's Eyes' Cunningham on the right, with a Mossie. 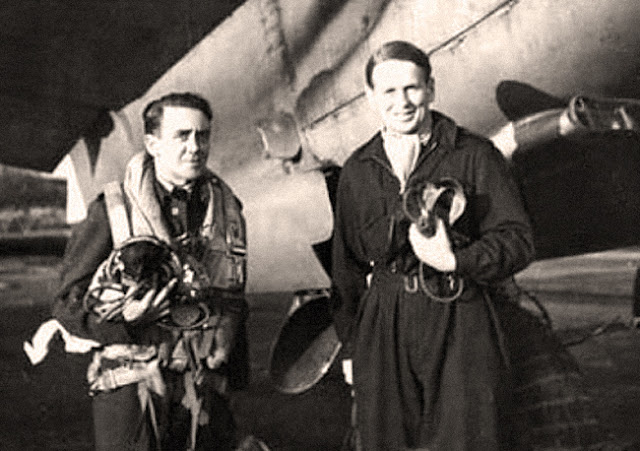 Cunningham disliked the 'Cat's Eyes' nickname, which sprang from the whole 'carrots improves your eyesight' myth that may or may not have originated in Britain during the war, but was certainly popularized and perpetuated there. The connection of this myth with that of successful RAF night fighter pilots was an attempt at disguising the actual reason for the success of the night-flyers; radar. Radar was still a tightly-held secret in those days and the RAF wanted to do all it could to keep it that way, even if it meant telling tall tales. Cunningham was touted as having such good eyesight, even without the benefit of a carrot-rich diet, that he could see in the dark like a cat. Ridiculous, but the public ate it up, apparently, and the name stuck.

Oh, and here's the old paperback in question... 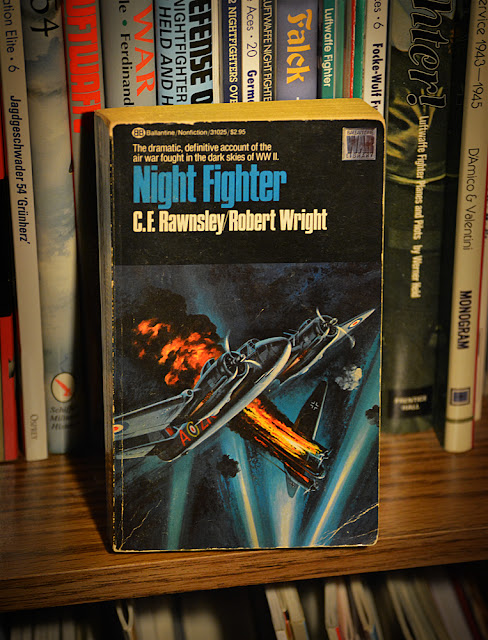 There's much, much more to this book than what little is described above, and your blogmeister truly recommends it, with two thumbs up, for anyone interested in air warfare of the Second World War.

One last thing... for those wondering about the title of this installment of TWW, it's a Latin phrase meaning: "If you want peace, prepare for war."

'Twas 604 Squadron's motto, as well as a sad and timeless truth.

A New Kind of Cat

The F9F was the first of Grumman's jet-powered Cats, and arguably the most-goodest-lookin' one, too. Here we present the very first example, XF9F-2 BuNo. 122475, snapped in the vicinity of Long Island during her first flight on November 21st, 1947. Famed test pilot Corwin 'Corky' Meyer was behind the stick. 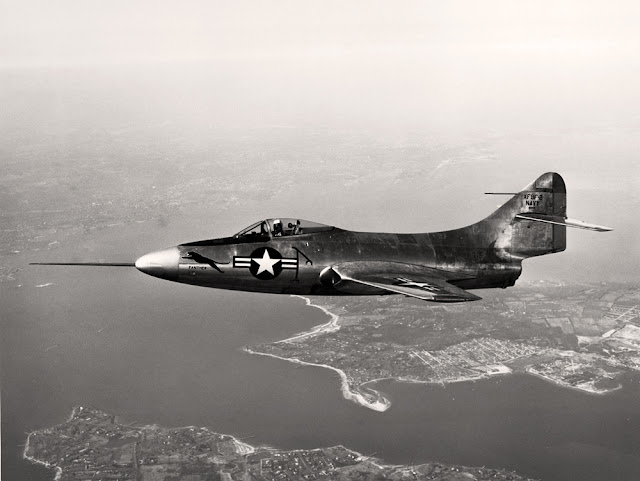 The last two installments of this-here little cyber-rag have got us hunting for pix of the 'Six'. And today we present a couple'a beauties taken on June 28th, 1985 showing F-106A 59-0024 of the 49th Fighter Interceptor Squadron which flew out of Griffiss AFB at Rome, NY from 1959 to 1987.

The pictured 'Six' is equipped with an M61A1 20mm cannon, one of a dozen supplied to the 49th FIS. Read more about this interesting mod for the F-106 HERE. 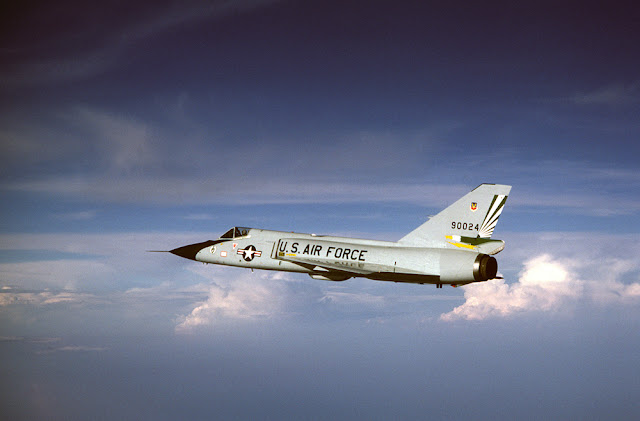 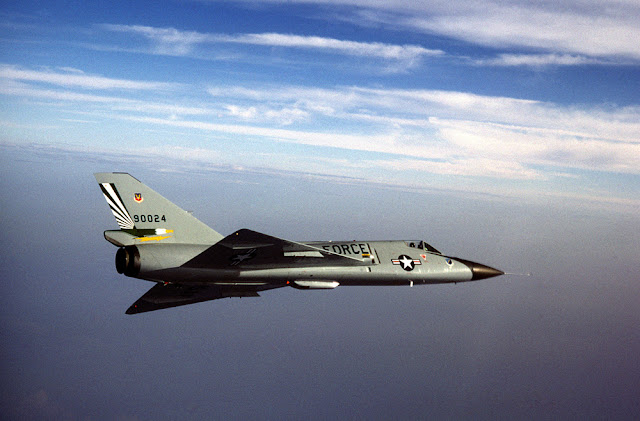 Here at TWW we are loath to publish anything with a watermark because we loathe watermarks.

But every now and again we come across something which has that which we loathe but which is also entirely waaaaay-too-freakin'-groovy to pass up.

In our last installment, we shared a couple'a photos showing the 159th FIS Bicentennial jet, F-106A 58-0760. As some of you, our readership of not more than half-a-dozen may be aware, the 'Six' was a pure interceptor. When the Russkies came-a-knockin' on CONUS' door back in the 1970s and 80s, chances were good that a Six or two would be there to greet 'em.

Anyhoo, back in the mid-1970s, 'ole '760' made at least one intercept while decked out in her party dress, as evidenced by this neat-o-keen pic, snapped by someone aboard the Bear that was being intercepted. (presumably an Ivan named A.Rubljov) 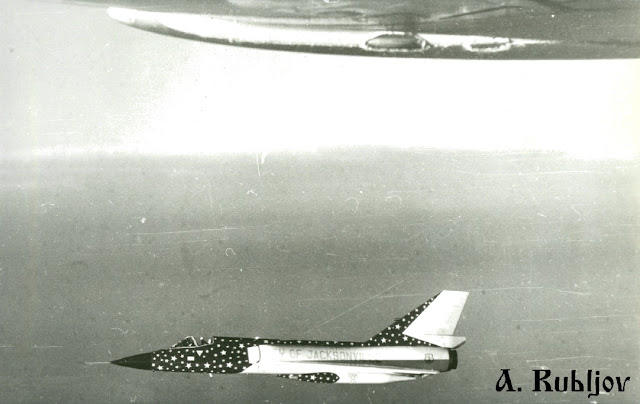 Seeing as today is July 4th, and TWW is brought to you from the good 'ole US of A, today's installment has a patriotic twist to it.

Back in 1976, many a USAF squadron (as well as USN and USMC) celebrated the USA's Bicentennial by decking out at least one of their birds in a special paint scheme. Some outfits were fortunate enough to have an aircraft whose serial number included a '76', and incorporated this into the design of their paint jobs.

F-106A 58-0760 of the 159th Fighter Interceptor Squadron, Florida Air National Guard was one such aircraft, and carried what your blogmeister thinks was the most breathtaking Bicentennial paint job of them all... 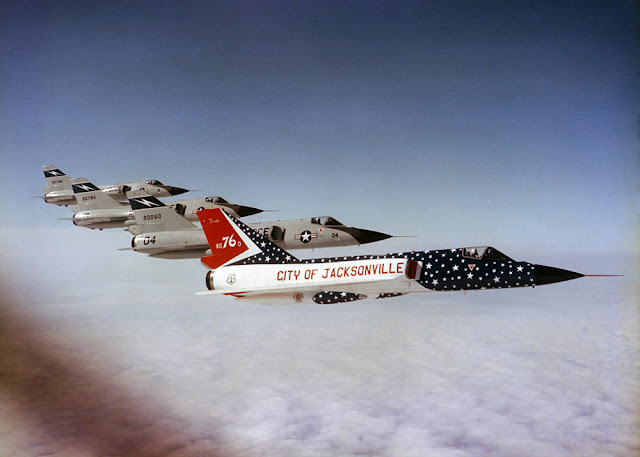 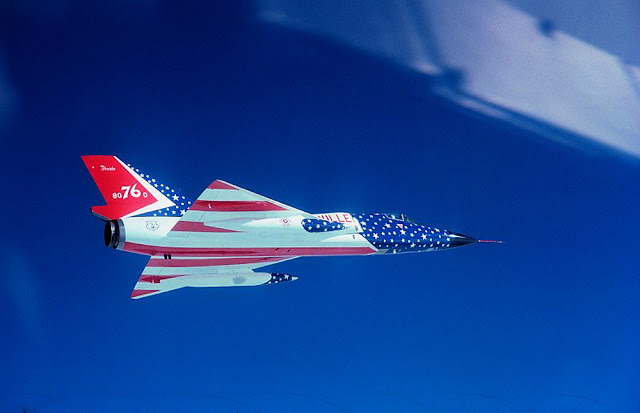 As a young nut for things with wings growing up during the height of the Cold War in the early to mid 1980s, your blogmeister was fascinated for a time with Red Stars. Conjuring in his head images of air fighting over European battlefields involving Warthogs and Phantoms and MiGs (oh my), he was initially little aware of the likes of the Sukhoi Su-15, or its mission. But upon learning of this Russian interceptor, and viewing it as something of a mystery, seldom covered as it was in aviation rags of the time, the 'Flagon', as NATO knew it, captured his imagination like no other Russkie jet.

The Su-15 entered service with the Soviet Air Defense Forces in the mid-1960s, replacing the earlier Su-9 and Su-11, both of which, over the course of less than a decade, had proven somewhat insufficient for the task of intercepting Yankee Air Pirates that dared intrude upon Matushka Rossiya's airspace. The Flagon was not without problems of its own, though, as is usually the case with pretty much every type, but it was nonetheless a vast improvement over its short-lived predecessors. So much so that it remained in service with the Soviets until the early 1990s.

In the future we may delve a bit deeper into the operational history of the Sukhoi Su-15. But for now, we leave you with an iconic image of the Flagon that caught your blogmeister's eye so many years ago... 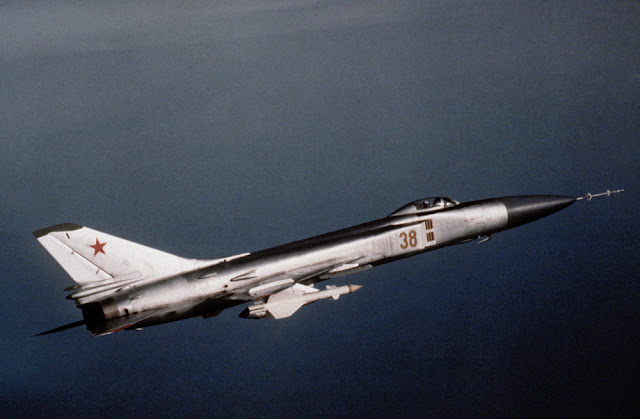 Incoherent rambling by Hawk914 at 2:26 AM No comments: