Back in 1952 the Air Force sent out an open memo that said, 'We need a new jet trainer'.

Cessna received the memo, rang up the Air Force and told 'em, 'We can do that'.

The Air Force was thrilled and asked, 'Can you make it annoyingly loud?'

Cessna was like, 'Hell yeah... how many decibels we talkin'?'.

And the rest, as they say, is history...

Okay, so perhaps things didn't transpire exactly as described above. But the basic gist is the same; the USAF wanted a new, lightweight, 2-seat, jet-powered basic trainer and Cessna came up the winner with a design that has become a true classic over the course of its half-century service life...


The first prototype, XT-37 serial number 54-716, which was destroyed during spin testing. 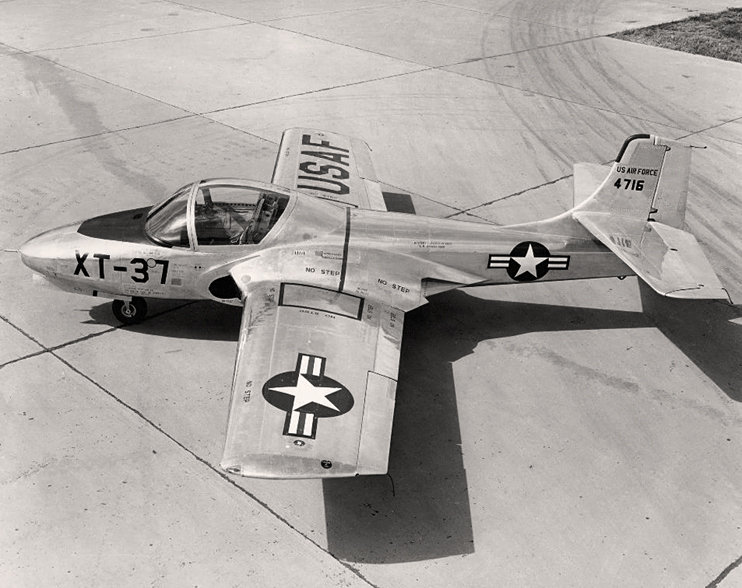 
And yeah, it was loud... freakin' loud. The rush of air through the intakes made a godawful high-pitched whistling noise. Combined with the not inconsiderable sound generated by the engines themselves, this piercing whistle was enough to give one an instant headache, and ear protection was mandatory for anyone working with the aircraft. The USAF even went so far as to install sound-proofing in the buildings at bases from which the T-37 was regularly operated. 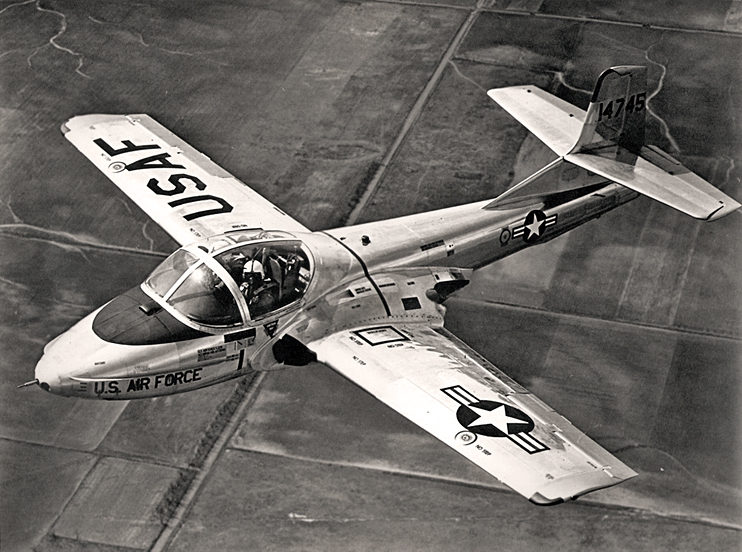 
And there you have the origins of the T-37's plethora of nicknames... some of which were, 'Screaming Mimi', 'The 6,000 Pound Dog Whistle', and its semi-sorta official nickname, 'Tweety Bird' which was often shortened to just 'Tweet'. But your blogmeister's favorite is 'The Converter'... meaning that the bird took fuel and air and converted it into noise and smoke.

We don't plan on running a long series on the T-37 and its trouble-making brother, the A-37, but keep an eye out for more of both in the future!

Incoherent rambling by Hawk914 at 1:51 PM No comments:

The first Boeing XB-29 Superfortress made its maiden flight on September 21st, 1942, seventy-three years ago today, at Boeing Field in Seattle, Washington. 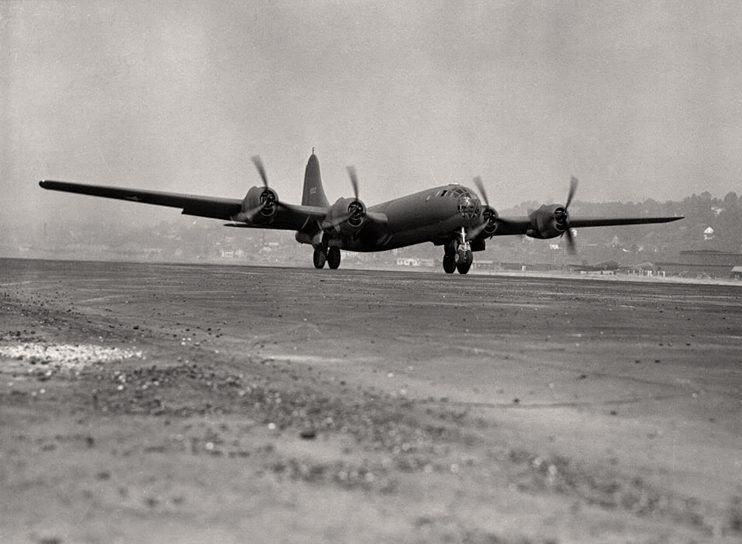 We've probably mentioned it before, but we love purty pikshurs around here. And today TWW brings you a couple'a bee-yoots...

These two shots of Swiss Air Force F/A-18 Hornets all wrapped in vapor were snagged by Peter Gronemann at the Axalp Airshow in October of 2012. 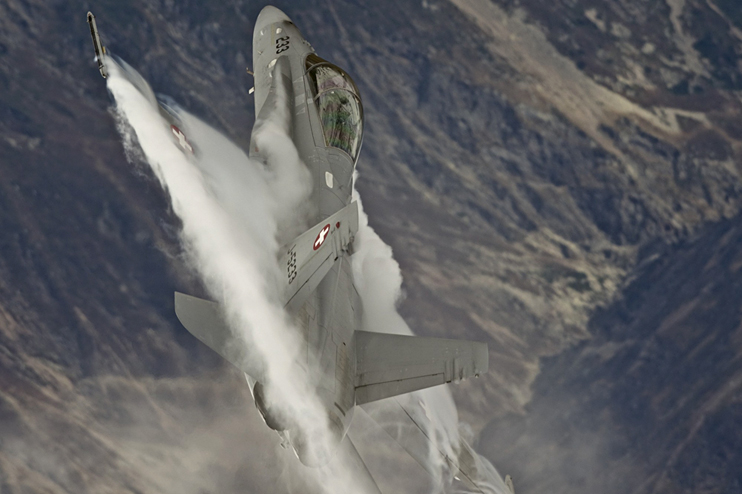 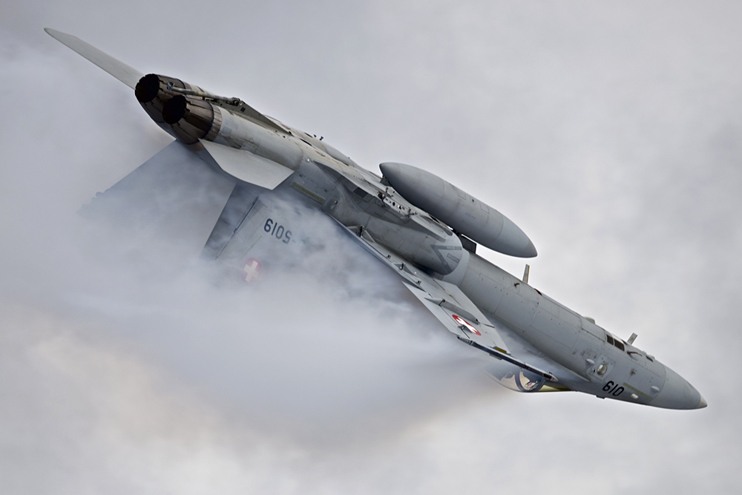 Hey, Bird Dog, Get Away From My Quail...

During the 'Last Good War' (WWII) the U.S. Army employed a large number of light aircraft in the artillery-spotting, observation, and liaison roles... aircraft such as the Piper L-4 and Stinson L-5, among others. Universally known as 'Grasshoppers', partly because of their STOL (short take-off and landing) characteristics, and partly due to the fact that they were, more often than not, operated from rough, grassy fields, these little birds were comparatively fragile, just like their namesake. They were constructed largely of metal tube frames covered with fabric skin, and did not always stand up well to the rigorous use they saw in numerous combat zones around the globe. After the war, the U.S. Army wanted to replace all of these 'grasshoppers' with something just as capable, but a bit more sturdy.

Essentially a development of the civilian Cessna 170, the all-metal Cessna Model 305A, later dubbed the 'Bird Dog', was chosen by the Army as its new, 'more sturdy grasshopper' and production began in 1950, with deliveries starting in December of that year. Soon thereafter the first Bird Dogs were sent to Korea to take part in their first shooting war.


An Army L-19A, serial number 51-4829, shortly after coming off the assembly line at the Cessna factory in Wichita, Kansas.
This Bird Dog survives today and is regularly flown by a civilian owner. 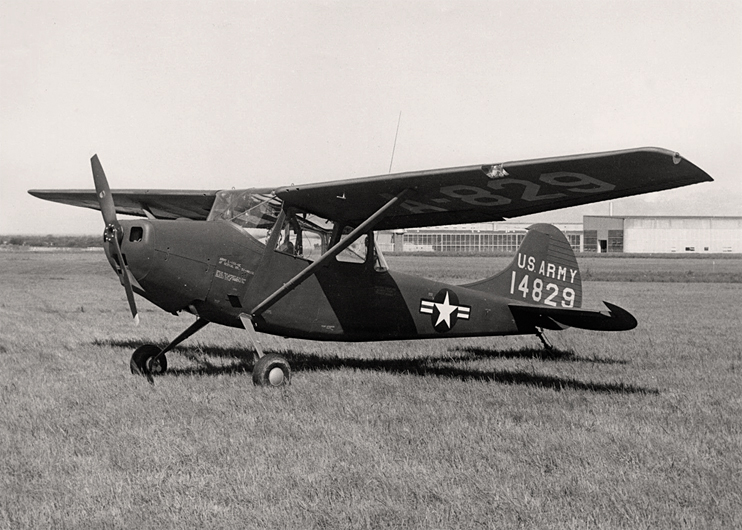 
Roughly 3,200 Bird Dogs were built between 1950 and 1959, initially seeing widespread service with the U.S. Army as the L-19 and the Marine Corps as the OE-1. In 1962 designations for U.S. military aircraft were standardized, and all Bird Dogs received the designation O-1. Not too long afterward, the Bird Dog took part in its second shooting war... Vietnam.

It was during this conflict that the Bird Dog was utilized in what has become its most iconic role... that of FAC (Forward Air Control) for the U.S. Air Force. In this role the Bird Dogs would loiter in a combat area, using smoke rockets to show the Air Force, Navy, and Marine fast movers where Charlie was so that they could accurately drop their things that go boom without hitting friendlies. The FACs also directed SAR (Search and Rescue) operations to pick up downed pilots. In both of these roles the Bird Dog excelled, though quite the price was paid. The slow and low-flying FACs constantly took direct fire from Charlie, and the O-1s suffered heavy losses. Rarely was a FAC pilot's day described as boring.


An O-1 FAC fires a smoke rocket to mark a target for attack birds, January 1967. 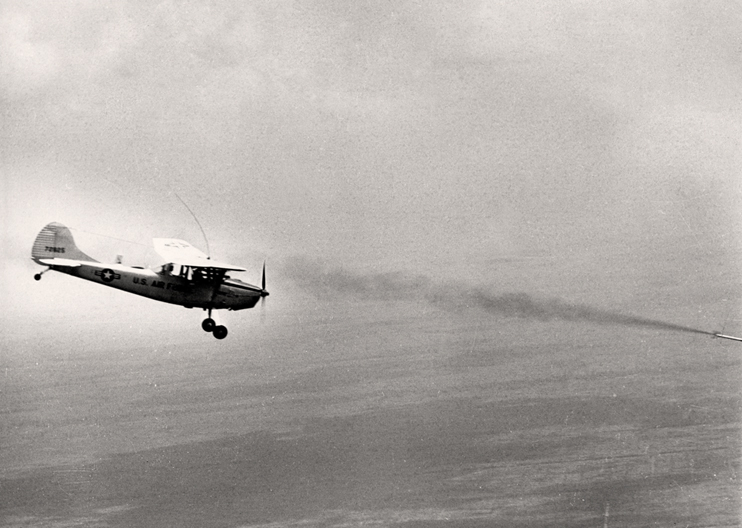 
It wasn't long before the O-1 was replaced in the FAC role by more modern and more capable types, such as the O-2 Skymaster and OV-10 Bronco. But the 'ole Bird Dog soldiered on for a while longer in less demanding roles until it was retired from U.S. military service in the mid 1970s.

Incoherent rambling by Hawk914 at 7:21 AM No comments:

For our first appearance in right around thirty more than half a full three-sixty-five, we here at TWW thought to bring ya'll something of an obscurity from the heyday of the Cold War... an obscurity known as the Supermarine Scimitar.

Compared to its somewhat distant and world-renowned ancestor, the Supermarine Spitfire, the Scimitar is indeed not all that well-known. But it was a significant type in that it was the Royal Navy's first swept-wing, single-seat jet fighter, and its first nuke-carrier. It was also significant in being the last aircraft manufactured under the fabled Supermarine name.

The Scimitar served with five squadrons, 736, 800, 803, 804, and 807, aboard the Royal Navy's flattops for a little over ten years. Despite a horrible accident rate that saw the loss of 39 of the 76 production aircraft delivered, (which was due more to incompatibilities of the relatively small British carriers and a fairly large, powerful aircraft than any inherent deficiencies with that aircraft) the Scimitar was well-liked by those associated with it, and the type was able to fill a number of roles, including interception and reconnaissance, aside from its primary function as an attack bomber. Later on, toward the end of its front-line service life, the Scimitar also filled the role of flying gas station, bar-tending to thirsty, gas-guzzling customers... especially its replacement in Fleet service, the Blackburn Buccaneer. 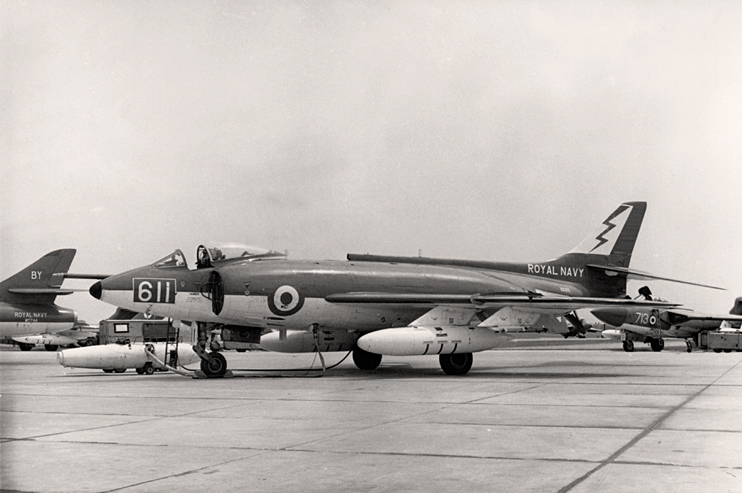 Incoherent rambling by Hawk914 at 1:03 PM No comments: