Working With the Colonials

So far in our series on the P-51, we've covered only the prototype and early, Allison-powered Mustangs of the RAF. After all, the type was designed and initially built for the Brits, so we figured we'd give 'em first billing. But the US Army eventually got into the derby as well. So as something of a segue before we delve into star-clad Ponies, we thought to share a groovy photo showing Royal Air Force and US Army Air Forces wrench-turners getting familiar with an RAF Mustang I, serial AG411, at RAF Burtonwood on April 1st, 1943.

Here's the NARA caption for this photo: 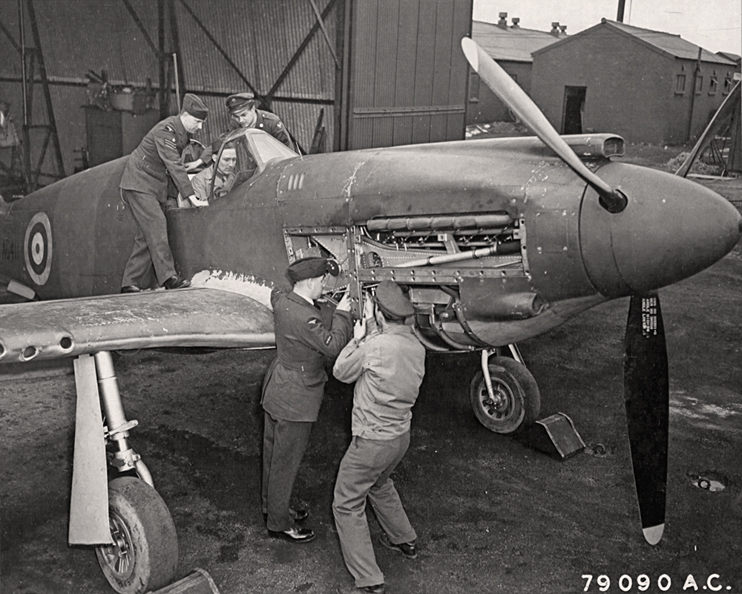 During the early stages of the United States' involvement in the war against Hitler's Germany, the gears in the USA's war machine turned somewhat slowly. The first elements of the U.S. military to set up shop 'over there' were of the USAAF's Eighth Air Force, with the first contingent of personnel (mostly HQ staff) arriving in May of 1942. Soon thereafter, combat outfits began arriving... slowly... and it wouldn't be until the Fall of that year that the Eighth's VIII Bomber Command was able to mount its first heavy bomber mission against the Axis.

With the powers that be eager to see our boys in action against the Germans as quickly as possible, if only for the purposes of a morale-boost aimed at the folks back home, VIII Bomber Command's 15th Bombardment Squadron (Light), the only complete AAF combat outfit in the UK at the time, was tossed into the fray. Attached to No.226 Squadron of the Royal Air Force at Swanton Morley, the 15th was 'learning the ropes', so to speak, from their experienced compadres. Though we mentioned that the 15th BS was the only 'complete' AAF outfit in the UK, this was only so far as personnel was concerned. The squadron had no aircraft of its own and, for the time being, was flying 226 Squadron's aircraft... the Douglas Boston, known to us Yanks as the A-20 Havoc.

The date for the USAAF's first 'official' mission against the Axis was set for July 4th, 1942... no doubt an effort to stir the pot of patriotism that was boiling in the USA. The targets were four German airfields in Holland, at DeKooy, Bergen Alkmaar, Valkenburg, and Haamstede. Though labeled as the first USAAF mission in the ETO, this was to be a joint RAF/AAF operation. Of the twelve 226 Squadron ships participating in this mission, half would be manned by American crews.

The first Boston lifted off from Swanton Morley at 07:09 hours on the morning of the 4th. Within five minutes all twelve ships were airborne and, after forming up over the Norfolk countryside, headed toward the coast at low-level. While over the North Sea, the Bostons encountered some enemy coastal patrol vessels which probably alerted the Luftwaffe to their presence. On reaching the Dutch coast, the formation of twelve split up into four formations of three and headed toward their targets.

At Haamstede all three ships, 'G for George', flown by Flt.Lt. A. 'Digger' Wheeler, a New Zealander, 'F for Freddie', flown by Plt.Off. Eltringham, and 'M for Monkey', piloted by AAF Capt. Bill Odell, bombed and strafed the target successfully shortly before 08:00.

The attack on Bergen Alkmaar saw the mission's first casualties. Arriving at about 08:02 and led by Flt.Lt. R. 'Yogi' Yates in 'Y for Yorker', all three ships managed to bomb the target but AAF Lt. Stan Lynn's ship, 'V for Vic' was hit by flak within seconds of bomb release and crashed on the airfield, with all aboard killed. Minutes later, upon leaving the target area, Plt.Off. 'Hank' Henning's 'U for Uncle' was shot down by Uffz. Johannes Rothenow of IV Gruppe/JG 1. Rothenow had managed to get an Fw 190 from Bergen Alkmaar airborne during the attack and chased the remaining two attackers to the coast.

At Valkenburg, a navigational error and a mistake in using the bomb bay door controls by Sqn.Ldr. John Castle, flying 'A for Ac', saw this three-ship fail to drop its bombs, instead strafing only. Castle, along with AAF Capt. Martin Crabtree in 'D for Don' and AAF Lt. Leo Hawel in 'J for Johnnie' returned to Swanton Morley with full bomb loads.

The third loss of the mission, and very nearly a fourth, occurred at DeKooy. Another navigational error and intense flak saw this formation also fail to bomb its target. The leader of this flight, Sqn.Ldr. Kennedy in 'X for X-ray', was able to strafe anti-aircraft positions and personnel near the target, and would have had to return with a full bomb load had he not found some targets of opportunity on the way home... two trawlers in the sea. His bombs missed but he was able to strafe both vessels. The third loss of the mission was AAF Lt. Jack Loehrl's 'P for Pip'; the ship was hit by flak north of the airfield and crashed onto a beach, killing all aboard except the bombardier, AAF Lt. Draper who became a POW.

Boston 'Z for Zebra', flown by AAF Capt. Charles Kegelman, the 15th Bombardment Squadron's CO, almost became the fourth loss of the day. Taking a hit in the starboard engine that blew the prop off, Kegelman almost augered in... bouncing off the ground and at one point cutting a furrow in the grass with the starboard wingtip. Kegelman jettisoned his bombs and began to limp back home, strafing a flak tower on the way. 'Z for Zebra' was the last to arrive back at Swanton Morley, a few minutes past 09:00.

All in all, not the most auspicious of beginnings for the fledgling USAAF organization that would later become known as the 'The Mighty Eighth'.

But it was indeed only the beginning.


With his painting 'The First Mission', Nixon Galloway depicts a very tense moment for Captain Kegelman and the crew of 'Z for Zebra'... 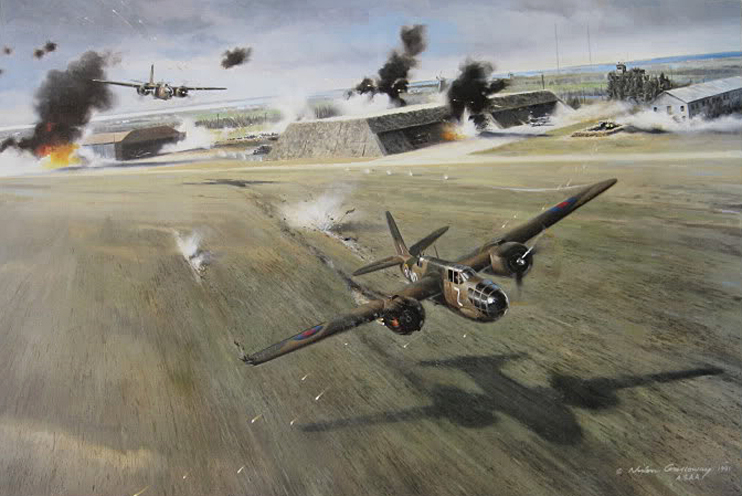 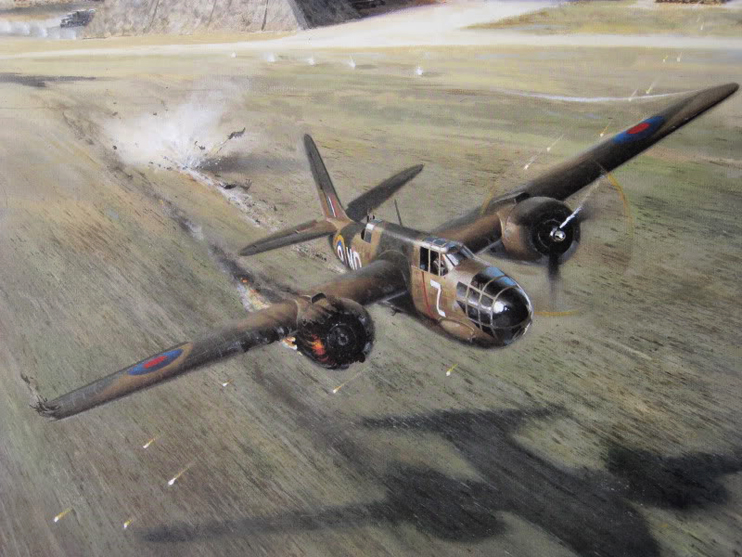 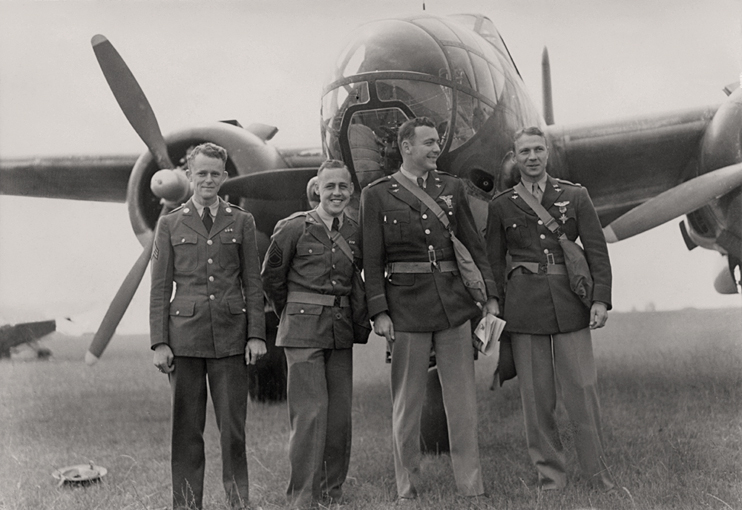 Another view of the four honorees with a 226 Squadron Boston. 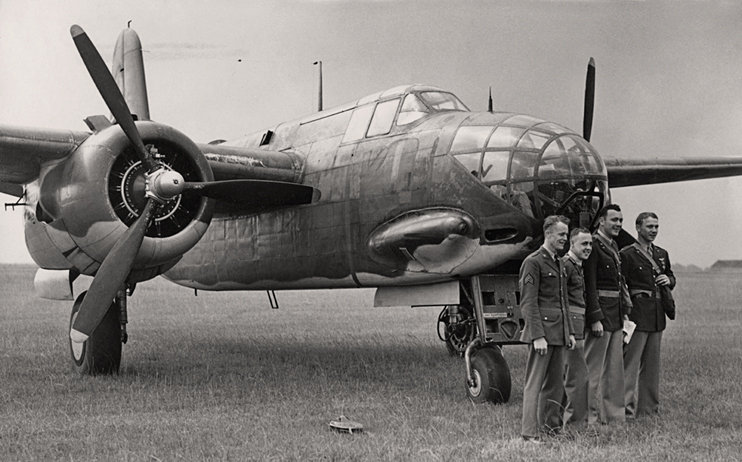