Your blogmeister can sometimes state things in a very blunt manner... and so he states bluntly that, back in the 1980s, Libya... or, more accurately, Libya's head-honcho, Muammar Gadaffi, was a freakin' pain in the ass. One demonstration of this was the bombing of a nightclub in West Berlin on April 5th, 1986 which killed three and injured 230 others. Two of the dead and 79 of the injured were U.S. servicemen; our military folks were known to frequent the club, named La Belle, and that was apparently one of the prime reasons for the bombing.

In response, the U.S.A. decided to give 'ole Gadaffi a taste of his own medicine. Or, at least to try and put a damper on Libya's brand of state-sanctioned terrorism. And so, on April 15th, 1986, during a strike called 'Operation Eldorado Canyon', aircraft of the USAF, USN, and USMC attacked targets in Benghazi and Tripoli...most of which were believed to be related to Libya's terrorist activities.

The ball started rolling on April 14th when 24 General Dynamics F-111F Aardvarks of the 48th Tactical Fighter Wing departed RAF Lakenheath in the UK late that evening. They were joined by four or five General Dynamics/Grumman EF-111A Ravens from the 42nd Electronic Combat Squadron, flying from RAF Upper Heyford, which would provide jamming support during the raid. The designated targets for the F-111s were Tripoli Airfield, Bab al-Azizia barracks, and the Murat Sidi Bilal terrorist training camp.


The following seven photos show the F-111Fs prior to and during departure for the raid... 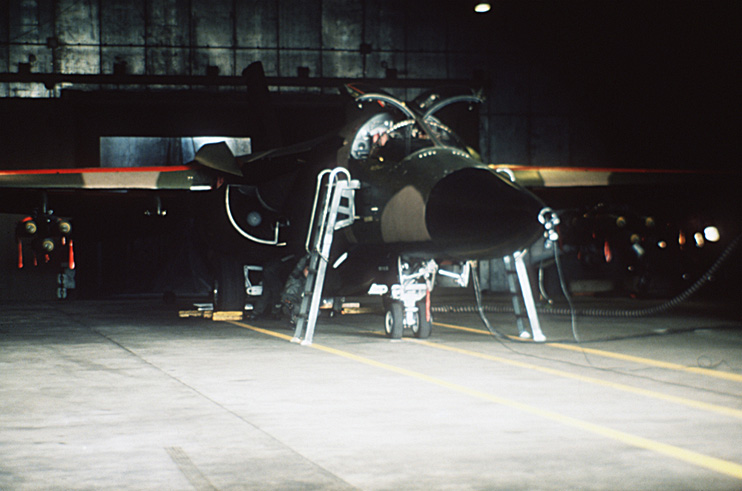 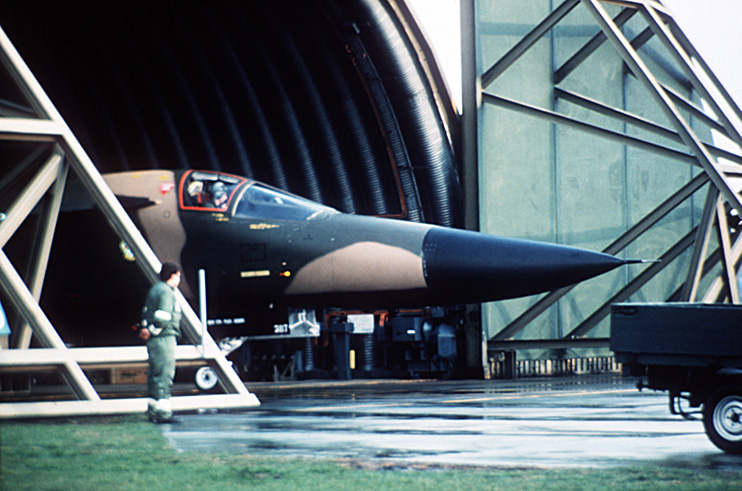 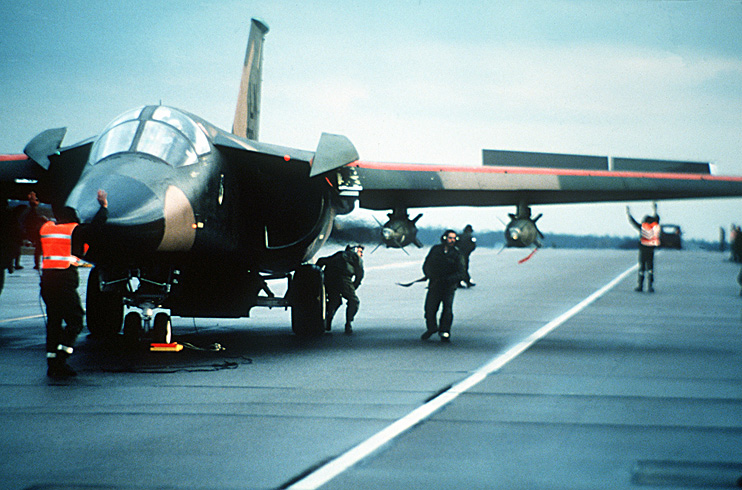 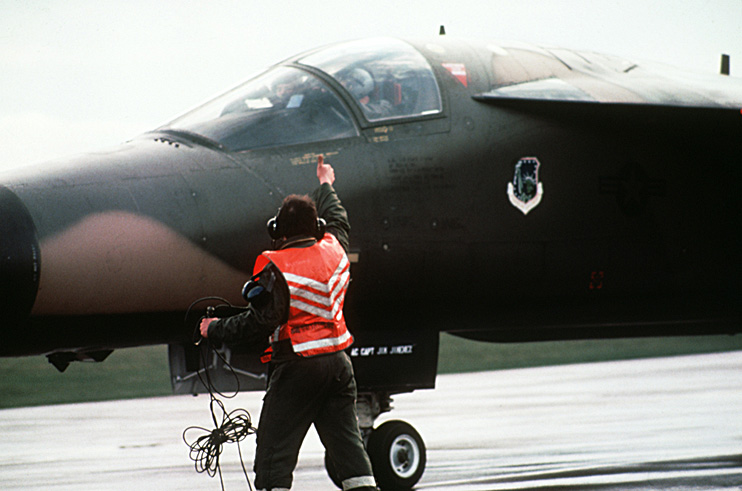 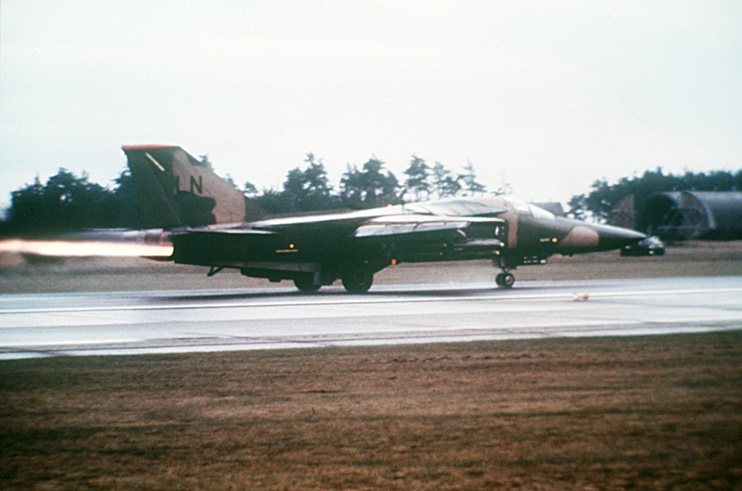 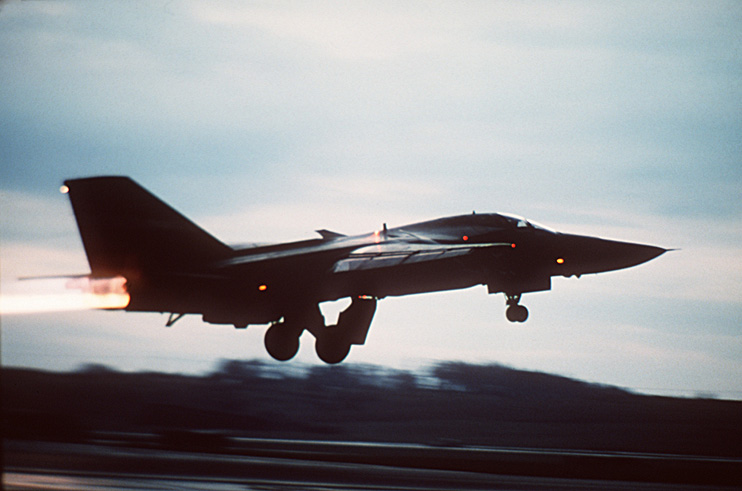 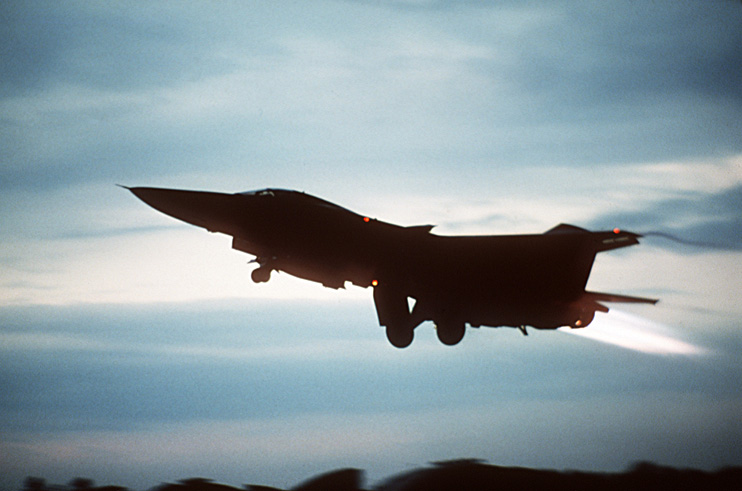 All above photos, SSgt. Woodward, USAF


As Spain and France refused to allow overflight of their airspace, the F-111s had to take the long way 'round, passing over the Atlantic Ocean, around Spain, through the Straits of Gibralter, and then into the Mediterranean Sea. They were supported by more than forty USAF tankers, refueling three times en route to Libya... twice over the Atlantic and again as they approached the Mediterranean. Of the force of 24 F-111Fs, six were spares which would take the place of any others that might have to abort for whatever reason. Apparently the spares were not needed and returned to the UK at some point between the second and third refuelings. 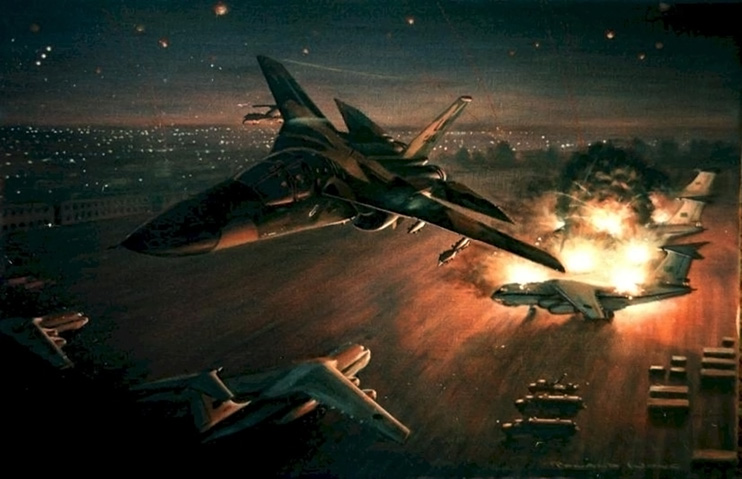 And a look at the real deal, as seen through an F-111's Pave Tack targeting system...

Also participating in the strike were several types of USN and USMC aircraft, operating from the aircraft carriers USS America (CV-66), USS Saratoga (CV-60), and USS Coral Sea (CV-43) which were all on station in the Gulf of Sidra off the coast of Libya. Grumman A-6E Intruders would attack Benina Airfield, and Jamahiriyah barracks near Benghazi, while LTV A-7E Corsair IIs, and McDonnell Douglas F/A-18A Hornets would perform air defense suppression at Tripoli and Benghazi, respectively. (This was the combat debut for the-then brand-new F/A-18.) Electronic warfare support was provided by Grumman EA-6B Prowlers. Combat air patrols were flown by Grumman F-14A Tomcats and F/A-18s, in case the Libyans managed to get any interceptors airborne, and the whole dang thang was watched over by the Navy's eyes and ears in the air, the Grumman E-2C Hawkeye air early warning aircraft. 
Though taken two days after 'Eldorado Canyon', this A-7E of VA-72, carrying Mk.20 Rockeye IIs and AGM-45 Shrikes, is representative of the A-7s which provided air defense suppression during the raid. 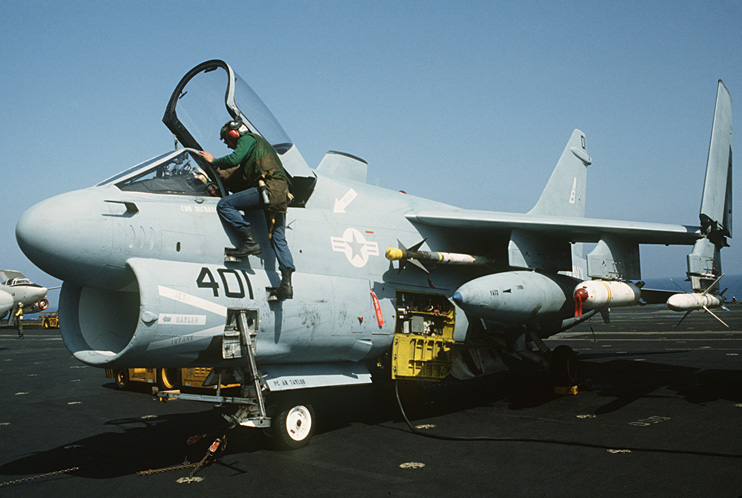 
This photo shows several F-14s from VF-102 and VF-33, with a single A-6 Intruder aboard USS America, and was apparently taken in the hours prior to launch for 'Eldorado Canyon'. 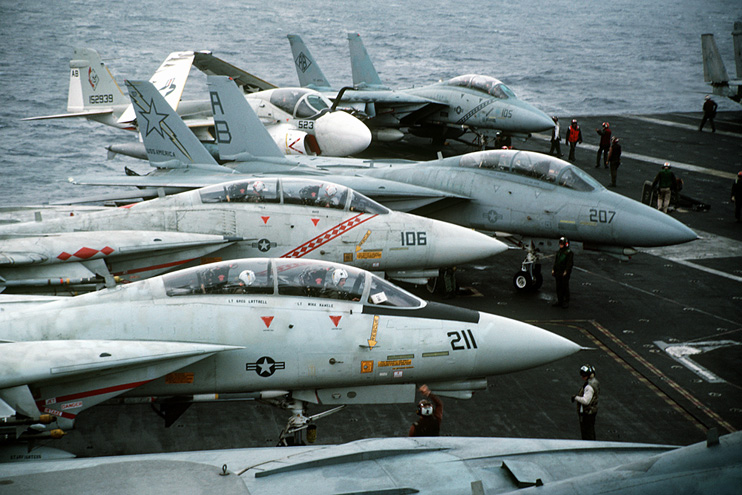 
As with any such undertaking, there were risks... and, sadly, one F-111F was lost with her crew. F-111F 70-2389, callsign 'Karma 52' is believed to have been hit by a SAM (surface to air missile) or AAA (anti-aircraft artillery) and gone down in the water while inbound to its target. 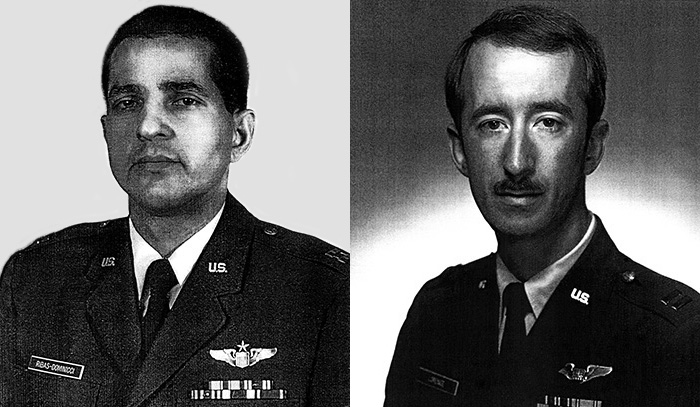 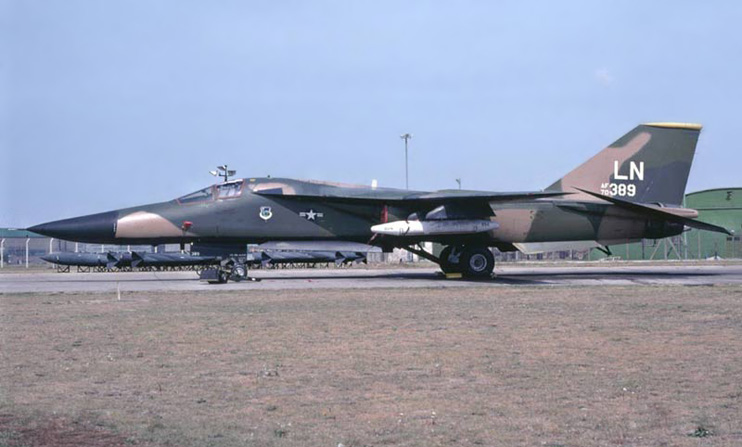 
Aside from the loss of the F-111 crew, the operation was largely successful in accomplishing its tactical objectives... though some ordnance did fall off-target and, regrettably, some civilian casualties were incurred. However, a greater objective was accomplished without question... and that was to show the world that those who would commit acts of terror would most definitely be held to account.

Unfortunately those who would commit such acts didn't quite get the message, and acts of terrorism are still taking place to this day. But your blogmeister rests somewhat easily at night because we still have those who, like the men of 'Eldorado Canyon', stand ready in the night to visit violence on those who would do us harm.

The above is a very general and incomplete description of 'Eldorado Canyon'. Your blogmeister could have written more, but he likes to keep things fairly brief more often than not. If you're interested in learning more about 'Eldorado Canyon', there's a good bit out there on the net. However THIS webpage contains by far the most detailed account we've come across.

In this installment of 'TWW' we've dipped into the LIFE photo archives to bring you a shot of the 'China Clipper', the first of three Martin M-130s built for Pan Am. In this view the 'ole gal is receiving some TLC. We're not sure of the location, but the year given was 1936... 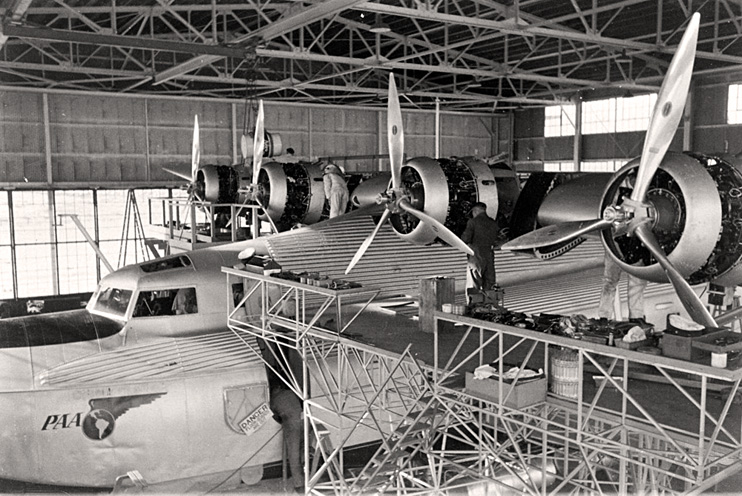 
If you're a flying boat fan, we'll likely be presenting more photos from this series in the future.

This-here's a super-groovy head-on shot of an Avro CF-100 Canuck, otherwise known as the 'Clunk' because of the sound made by the nose gear as it retracted into the gear well. This particular example wears the red and white colors of 423 Squadron, Royal Canadian Air Force. As a wing-nut, your blogmeister has gone through several phases over the decades, and at one point, fairly early on, he could not get enough of Cold War-era red stars. Well, that phase may have passed long ago but your blogmeister does like to reminisce on occasion.

During the Cold War a good number of Russkie-designed aircraft were constructed under license by other nations, including China. One such bird was the Shenyang J-6... the Chinese-built version of the Mikoyan-Gurevich MiG-19 'Farmer', and the subject of today's installment of 'TWW'.

This super-groovy shot shows a number of PLAAF (People's Liberation Army Air Force) J-6s heading out for a night flight... 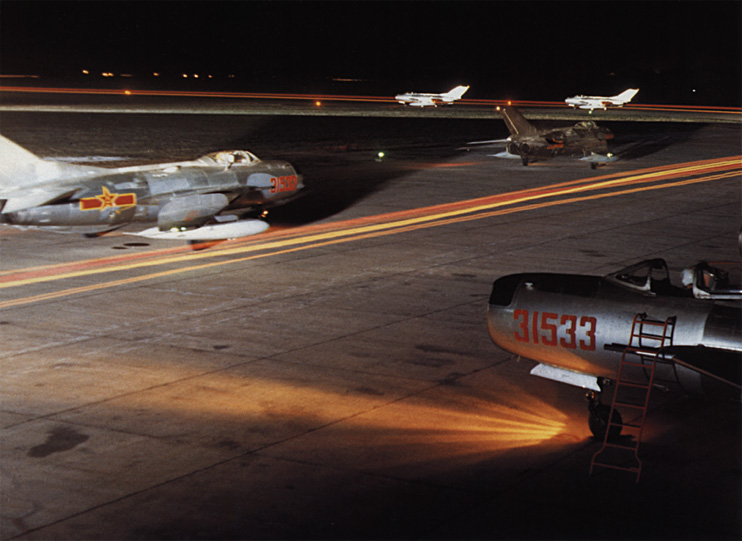 
The Chinese developed a two-seat trainer variant of the J-6, designated JJ-6. One of these was photographed from a US Navy P-3 Orion conducting a recon patrol over the East China Sea in November of 1998. 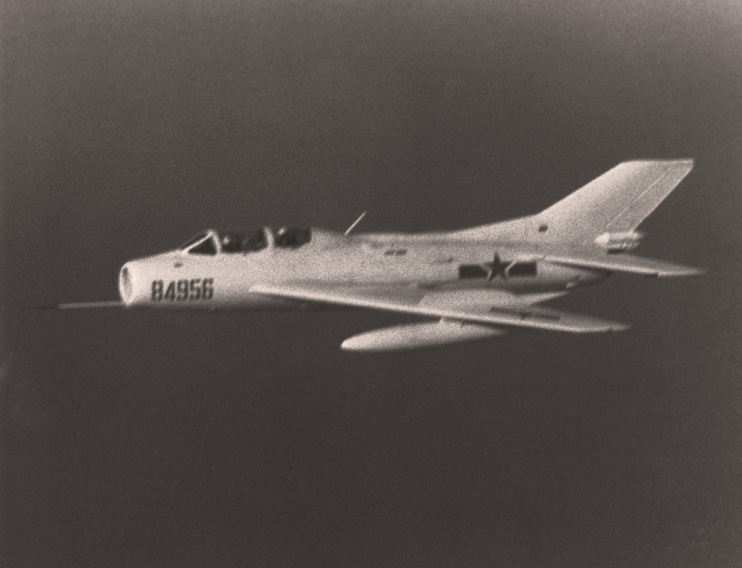 
The J-6 was retired from front line service with the PLAAF in 2005, but apparently some examples continued to fly for several years, (perhaps as trainers or in some sort of support or test role) as evidenced by these next two photos which were taken at an airshow in 2010. 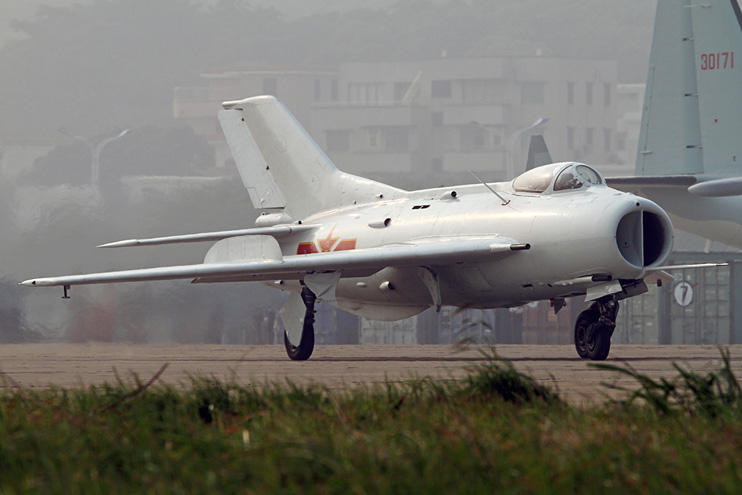 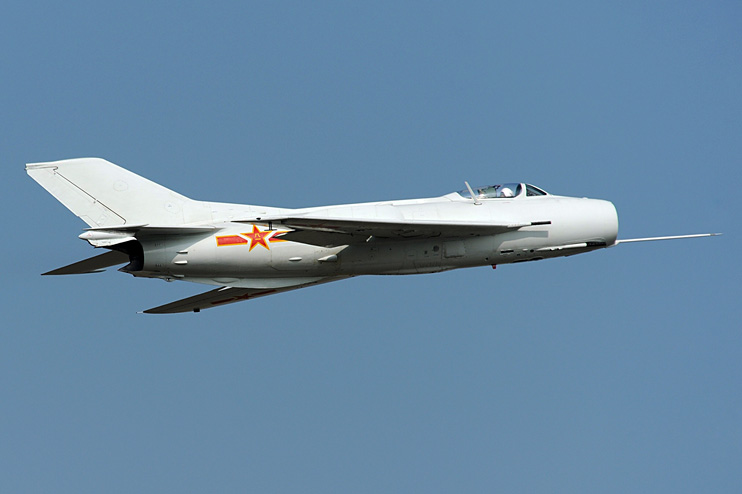 
The Shenyang J-6 was exported to more than a dozen nations, the most notable recipient being North Vietnam. During the Vietnam War the VPAF (Vietnam People's Air Force) operated more than fifty J-6s with limited success, downing seven U.S. aircraft for a loss of at least ten of their own. (Apparently a few U.S. birds were also knocked down by Chinese J-6s after wandering into Chinese airspace.)

Here we see a group of Vietcommie J-6 jocks from the 925th Fighter Regiment discussing how to deal with Yankee Capitalist Dogs in the air... using the only language that all pilots understand, regardless of their mother tongue or political ideology... 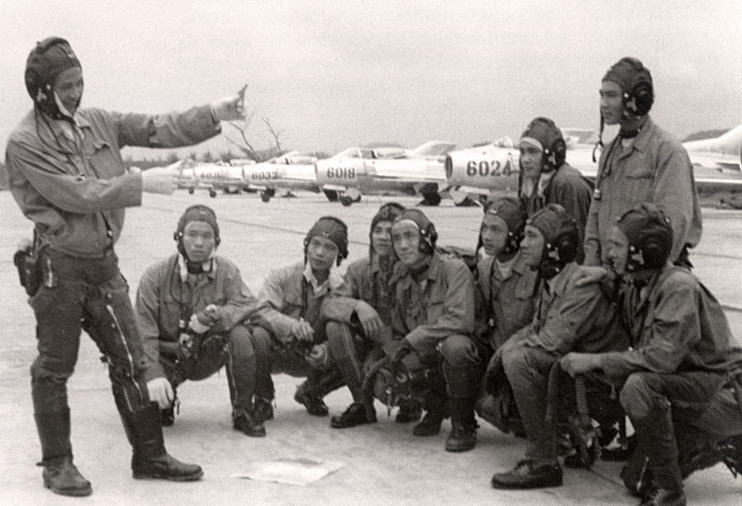