In this installment of our little cyber-rag we present a fine shot showing six F4U Corsairs from VMF-212, the 'Devil Cats', aboard the escort carrier USS Rendova (CVE-114) off the coast of Korea during 1951. Rendova and the Devil Cats would spend the majority of that year participating in the 'Forgotten War'. 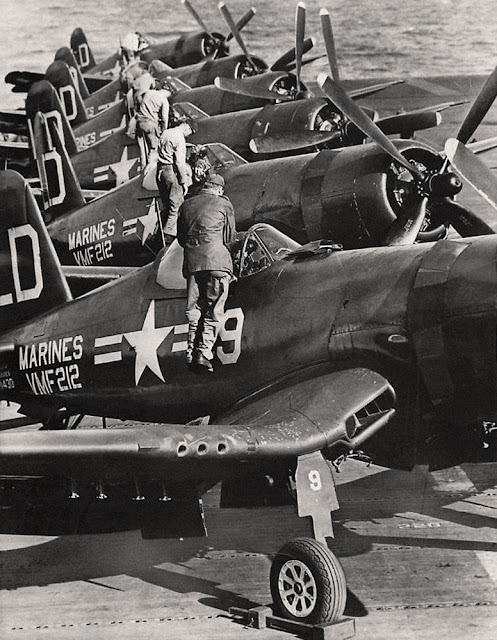 Incoherent rambling by Hawk914 at 9:42 AM No comments:

As has been stated a few times previous, we like us some purty pikshurs around these parts... and in this installment of 'TWW' we bring you a good'un showing a Canadair CT-133 Silver Star of the Canadian Armed Forces with a star of another sort as backdrop... enjoy! 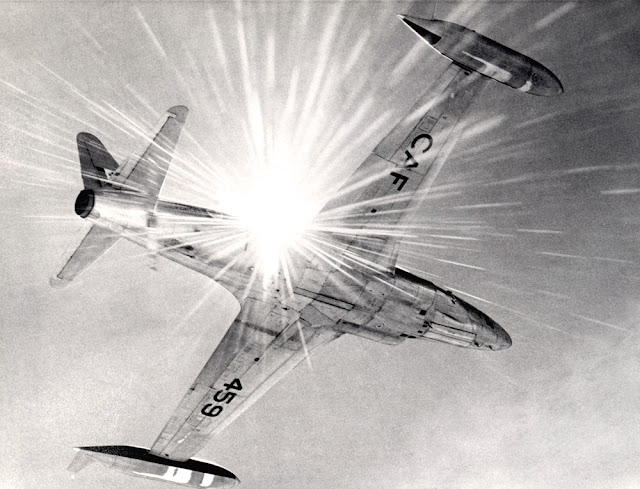 From the Canadian Military Aircraft Group on Facebook
Posted by Mr. Chris Charland


Back in the day, when things were still cool between Iran and the USA, the latter supplied the former with all sortsa neat toys... including things with wings, among them the Lockheed P-3 Orion. In fact, six of the sub-hunters were supplied to the Imperial Iranian Air Force in the mid 1970s, before things went south in the Shah's kingdom and the IIAF became the IRIAF (Islamic Republic of Iran Air Force).

These days only four Iranian P-3Fs remain in service with the 71st ASW Squadron, based at Shahid Douran Air Base; this one was photographed on March 11th, 2004 by a member of the Canadian Armed Forces. Here's the official CAF caption for the photo:

"An occasional visitor to the Coalition Forces in the Northern Arabian Sea, an Iranian P-3 Orion flies over HMCS Toronto. HMCS Toronto is taking part in Operation Altair, joining the USS George Washington Aircraft Carrier Task Group to help monitor shipping in the Persian Gulf. By restricting the flow of weapons, drugs, and other illicit trade, HMCS Toronto and her crew are helping to end terrorism and bring long-term stability to the region." 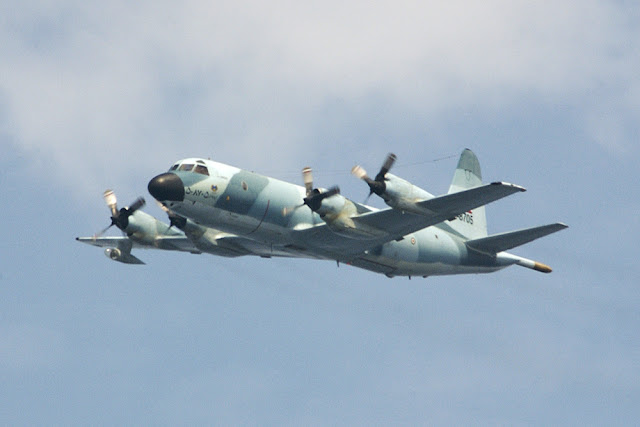 Incoherent rambling by Hawk914 at 3:21 PM No comments:

Some time back we ran a fairly lengthy series on the A-4 Skyhawk. Eventually we hit the pause button 'cuz your blogmeister figured that not every one of our readership of half-a-dozen or so was as crazy about Heineman's Hotrod as he is. Besides, said series could always be resumed at some point in the future... right? Well, the future is now. And although we're not gonna go ape with a virtual barrage of Bantam Bombers like before, be forewarned that you may see a sprinkling of Scooters here and there for a while, starting with this installment of our little cyber-rag.

Here we present a rather groovy shot of a family-model flown by 75 Squadron, RNZAF during COPE THUNDER '84-7. The official USAF caption follows: 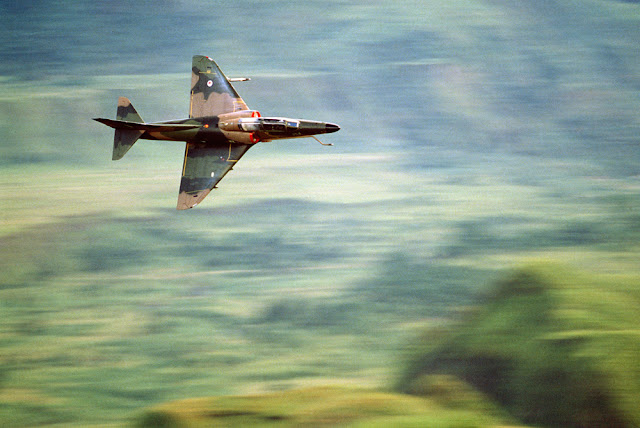 Incoherent rambling by Hawk914 at 9:41 AM No comments:

Today on 'TWW' we depart a bit from the norm and offer for your viewing pleasure a rather groovy piece of artwork depicting a really groovy-lookin' P.O.S.

The Vought F7U Cutlass was, in a word, something of a freakin' fiasco. Quirky handling due to an underdeveloped flight control system, woefully under-powered by highly unreliable powerplants, and a host of other problems pegged the type as a killer. Literally. A total of twenty-five pilots were killed while flying the Cutlass, with more than one quarter of the entire production run being destroyed in accidents. The nicknames 'Gutless Cutlass', 'Ensign Eliminator', and 'Widow Maker' were well-earned, as was 'Praying Mantis'. Although, one has to wonder if the latter was due solely to the type's appearance, or if the alarmingly common practice of the female mantis devouring her mate after 'fun time'  had anything to do with it. Who knows... *shrug*

All your blogmeister knows for sure, aside from the fact that it was a disaster, is that the Cutlass was one cool lookin' bird. 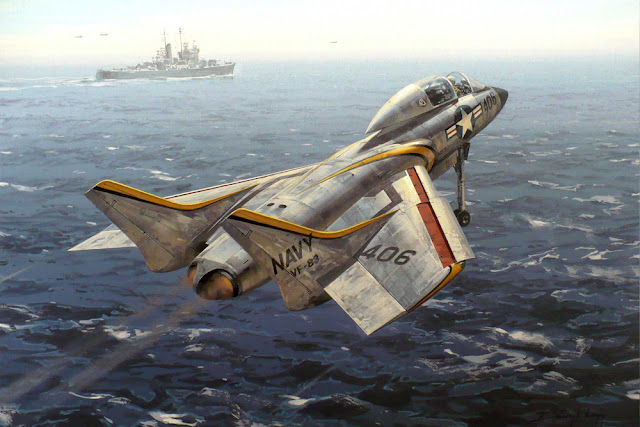 Incoherent rambling by Hawk914 at 2:50 PM No comments:

Around these parts we like us some Mitchells. The B-25 is your blogmeister's favorite USAAF medium bomber... this week. Any other week it would probably be #2, but this week it's in the top spot. Anyhoo, looking through the archives for a purty pikshur of a Mitchell, we came across this fine view of a B-25D sans paint and with only the requisite minimum of markings. (They're there... just gotta look.)

It ain't flashy or anything, 'tis just a real nice shot of a beautiful Plain-Jane B-25. Enjoy... 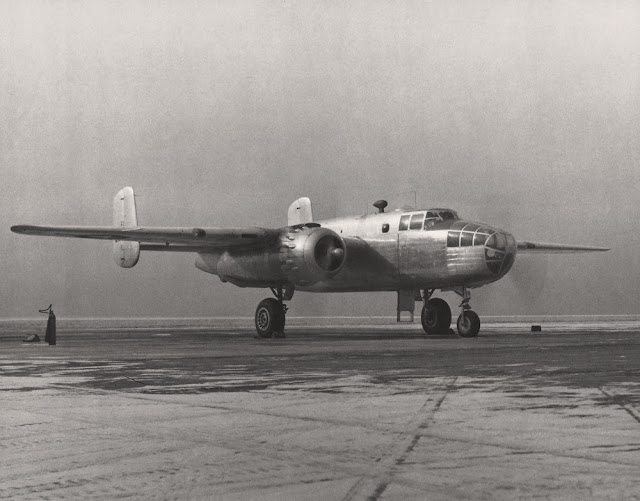 Incoherent rambling by Hawk914 at 3:47 PM No comments:

Today we bring you an old favorite. 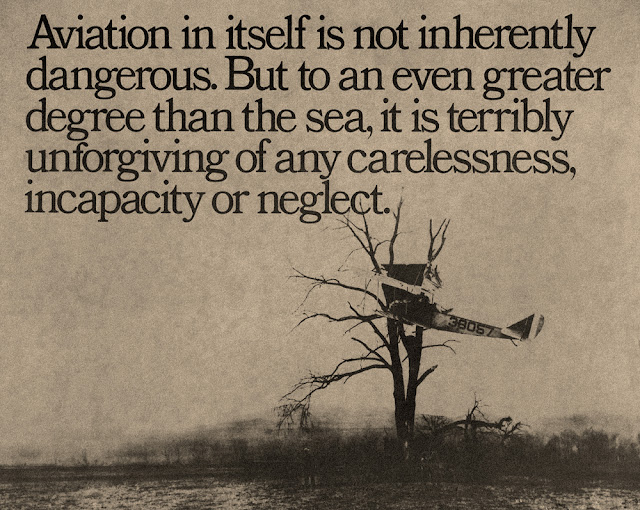 Incoherent rambling by Hawk914 at 1:48 AM No comments:

Myrsky Me, What a Storm

In this installment of 'TWW' we bring y'all something that you just don't see every day... a VL Myrsky.

"Wuzzat", you ask? Read on, look at the pikshur, and ye shall be enlightened.

In 1939 the Finnish Air Force was seeking fighter aircraft to defend itself from the onslaught of the Russian Bear. Several foreign types would serve under the siniristilippu, but the Finns also produced a number of domestic designs... among them, the VL Myrsky. (VL = 'Valtion lentokonetehdas'; the State aircraft factory.)

The Myrsky had wooden wings and a metal fuselage structure covered largely in fabric and plywood, leading some to refer to the type as the 'Finnish Hurricane'. Even the name strikes a synonymous chord; 'Myrsky' is Finnish for 'storm'.

But there the similarities end, as the Finnish type did not enjoy the same level of success achieved by its distant British cousin. Not even close. The prototype Myrsky flew on December 23rd, 1941 and proved to be a tad on the heavy side. Changes were made and three pre-production aircraft (Myrsky I) produced, but structural problems cropped up, particularly at high-speeds, and all three were destroyed during testing, with the loss of two pilots killed and nearly the third. Despite this, the type entered production, with 47 examples (Myrsky II) being produced. From there, it all came unglued... literally. The glues used in the Myrsky's wooden construction did not stand up well to the cold or wet, resulting in widespread failure of glue seams. Ten Myrskys II were destroyed in accidents from 1943 to 1947, with 4 pilots killed... who knows how many other 'near misses' there may have been. The type was retired from operations in May of 1947.

Despite all its problems, the Myrsky was well-liked by pilots because it was fast and maneuverable, comfortable to fly, and handled well not only in the air but also on the ground. Anyhoo, we present here for your viewing pleasure a fine view of 'MY-5', the first production Myrsky II. Nauti! Incoherent rambling by Hawk914 at 7:24 PM No comments:

Since first laying eyes on one, your blogmeister has always found F-16s of the Venezuelan Air Force to be singularly attractive on account of their unique and groovy camo, and was reminded of this earlier tonight by a friend. Also reminded of the fact that subject matter for this installment of 'TWW' had yet to be decided upon, your blogmeister made a rather quick and easy decision.

So, here and now, we present to you a unique shot of a curious Aviación Militar Nacional Bolivariana de Venezuela Viper driver who has spied something interesting and brought his Bic in for a closer look... disfruta! 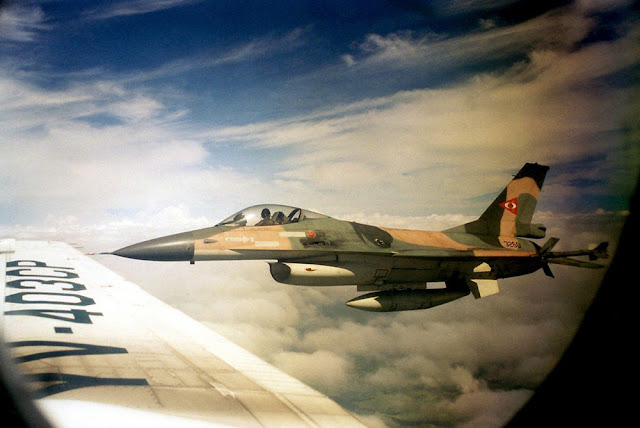 Incoherent rambling by Hawk914 at 5:57 PM No comments:

Today we bring you another in our running series on mascots. It's a sad one, though...

A couple'a years ago, through a series of 'viral' videos, your blogmeister, indeed the entire world, was introduced to a Border Collie named Piper, the 'Wildlife Control Officer' at Cherry Capital Airport in Traverse City, Michigan. His job: chase away the birds. Here's one of those videos:


Wildlife poses a potential hazard to aviators, with thousands of 'strikes' reported each year; bird strikes chief among them. (More info on that HERE.) Through his bird-dogging, Piper has helped to keep aviation a bit safer in his little corner of the woods, and became something of a celebrity to boot.

Sadly, in early 2018, Piper went West... but he will always be fondly remembered. 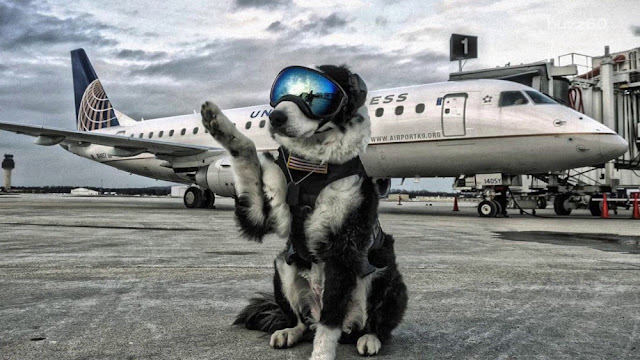 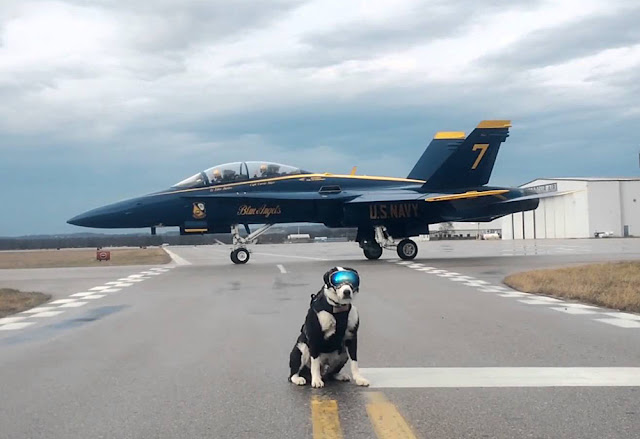 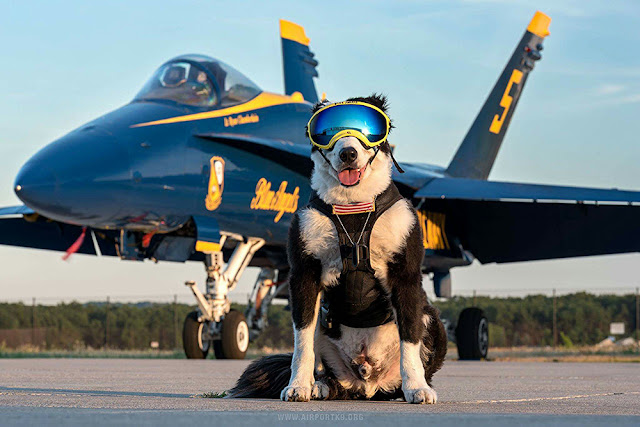 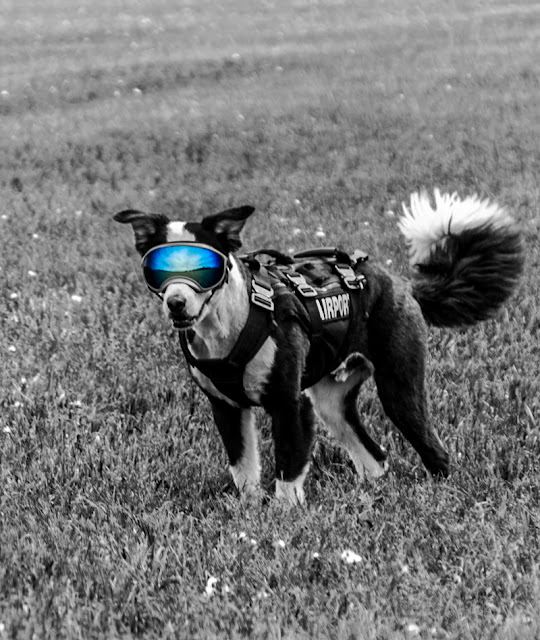 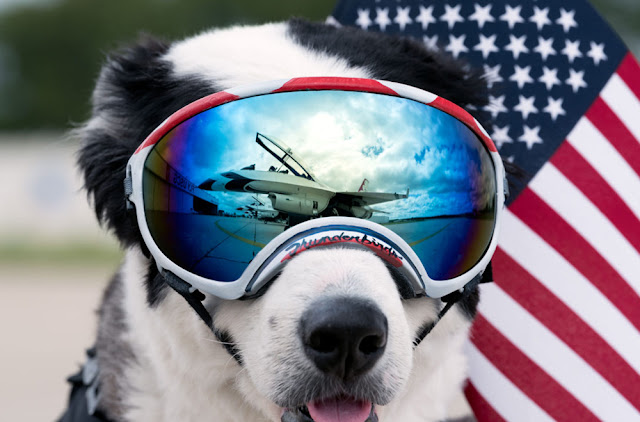 With this installment of 'TWW' we continue our running series on mascots with a fine shot of 'Seddy', whose master was Luftwaffe fighter pilot Oberleutnant Ulrich Steinhilper of I/JG52. Steinhilper was shot down during the Battle of Britain, on October 27th, 1940, and captured.

One has to wonder... what goes through the mind of a poochie like Seddy when their master fails to return home? 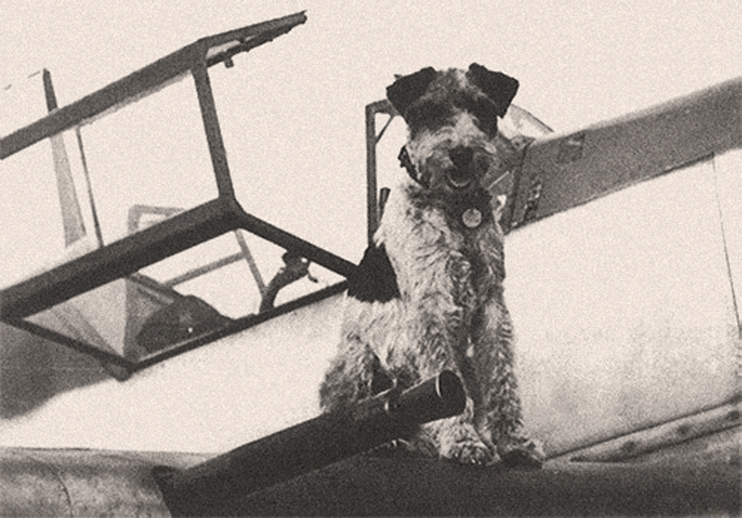 From: 'Spitfire On My Tail' by Ulrich Steinhilper

Incoherent rambling by Hawk914 at 8:00 PM No comments: