Your blogmeister has long been fascinated by 'intercept' photos and has collected a good number of them over the years... so this will undoubtedly be the beginning of yet another recurring series here on 'TWW'.

From time to time the Russkies get a bit curious about what we're doing, and vice-versa. Sometimes one side gets a bit close for comfort, and the other side sends somebody out to say, 'Wasssuuuuup?'

The photo we present today documents one of these 'meet and greets' which occurred on February 15th, 1977 when an F-14A Tomcat from VF-14 'Top Hatters' intercepted a Tupolev Tu-95 'Bear D' over the Mediterranean Sea. VF-14 was at the time flying as part of CVW-1 aboard the USS John F. Kennedy, and this particular Tomcat was still decked out in special markings that had been applied to celebrate the USA's bicentennial the previous year. 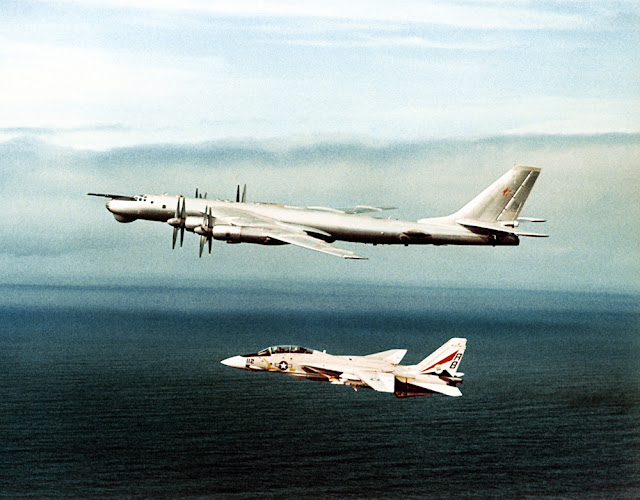 Today we bring you a really swell shot showing a stacked formation of five North American BT-9s from Randolph Field, Texas, circa 1940. 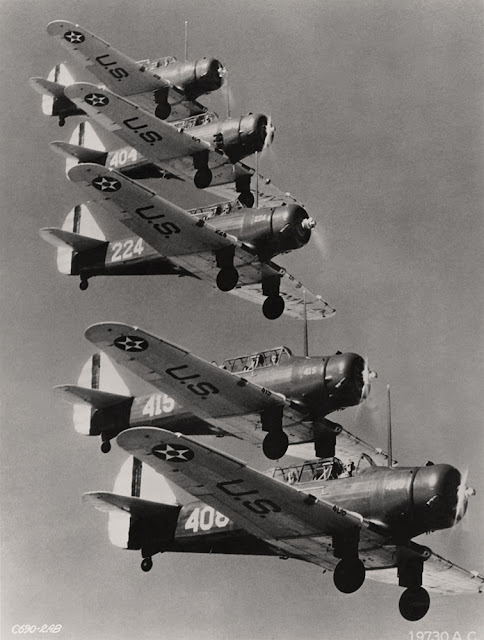 Incoherent rambling by Hawk914 at 3:45 AM No comments:

We loves-us some purty-pikshurs around these parts, and today's offering certainly qualifies. 'Tis an ausgezeichnet shot of a German Luftwaffe F-4F Phantom II turnin' and burnin' with the cloud machine switched on. Genießen! 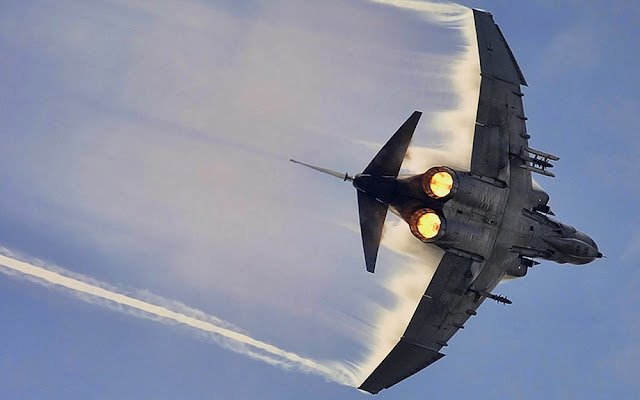 Incoherent rambling by Hawk914 at 3:58 AM No comments:

Today we bring you a super-freakin' groovy shot of a Convair F-102A Delta Dagger firing its load of 2.75 FFARs, probably at a target drone... but if you use your imagination, you can almost see that Deuce sitting about a mile behind a Tu-95 Bear... 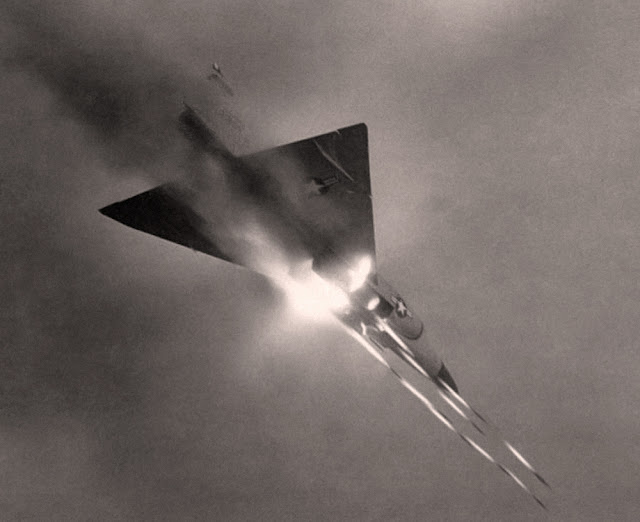 Today we present a couple'a photos showing one of the most visually striking aircraft to ever take flight... the Grumman X-29.

On this day back in 1984 Grumman test pilot Chuck Sewell took the first X-29 into the air for its maiden flight at Edwards Air Force Base in California. It had been more than a decade since an 'X' series aircraft had flown, and it would be a couple years shy of another decade before the program came to an end.

Two X-29s were constructed, based primarily on the Northrop F-5 airframe and incorporating completely new forward-swept wings. Their USAF serial numbers were 82-0003 and 82-0049. From 1984 to 1992, both X-29s made at least a couple hundred flights (the exact number eludes us, as every single reputable reference we've come across indicates a different number) testing flight performance of the the forward-swept-wing and its thin supercritical airfoil, variable camber wing surfaces, fly-by-wire control systems, and the use of new and novel materials such as composites in aircraft construction, among other things.

Anyhoo, this-here cyber-rag is more about the images than anything else, so here's a couple'a cool shots of the first X-29... enjoy. 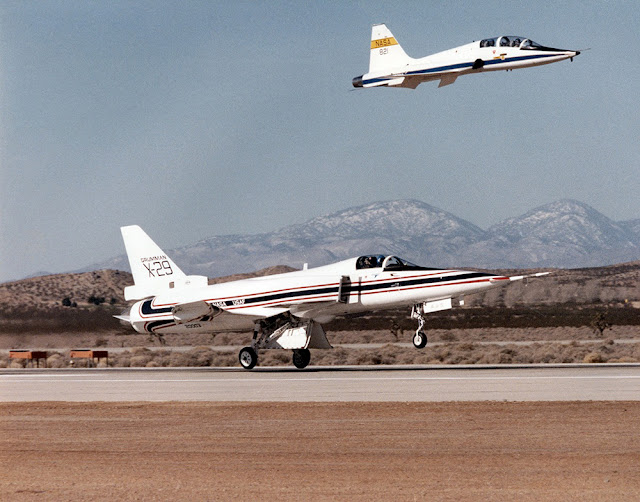 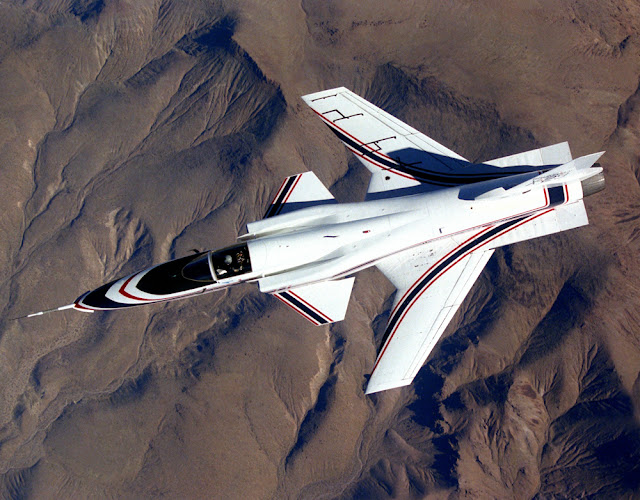 Commando, With a Capitol 'C'

Although you rarely see any of them in this-here cyber-rag, we've got a soft spot for birds of the Curtiss-Wright variety around these parts, especially the P-40 Warhawk and the C-46 Commando. Your blogmeister's Grandfather did his part during the Second World War, working at Curtiss-Wright in Buffalo, NY, helping to build many examples of both aforementioned types, which has led to your blogmeister living a life-obsessed... and today he feels compelled to present something from his personal vault.

Curtiss Commando N9893Z was manufactured in Buffalo, NY as C-46D 44-77574. Although we currently have no information as to her wartime service, we do know that she served with the 335th Troop Carrier Squadron, 514th Troop Carrier Group at Burlington AFB, Vermont in 1952 and with the 2578th Air Force Reserve Flying Training Canter at Ellington AFB, Texas in 1953. After that, another blank period until 1961 when she came under the ownership of Capitol Airways.

During her time with Capitol, N9893Z was leased, first to Quicktrans which did contract work for the U.S. Navy's Bureau of Supplies and Accounts during the early-mid 1960s, and later to Lufthansa, helping to establish that line's cargo operations.

Though we do not know the name of the photographer or the location, the photo presented here was likely taken in 1969 or the early 1970s after N9893Z had ended her stint with Lufthansa. In 1973 she was sold to Shamrock Airlines, then went on to Caribbean Air Service a few years later, and in 1978 ended up in Colombia, re-registered as HK-2020, though we're not sure as to which outfit(s) she may have been operating with. Apparently the 'ole gal soldiered on into the new century but, again, we're not sure as to further details. 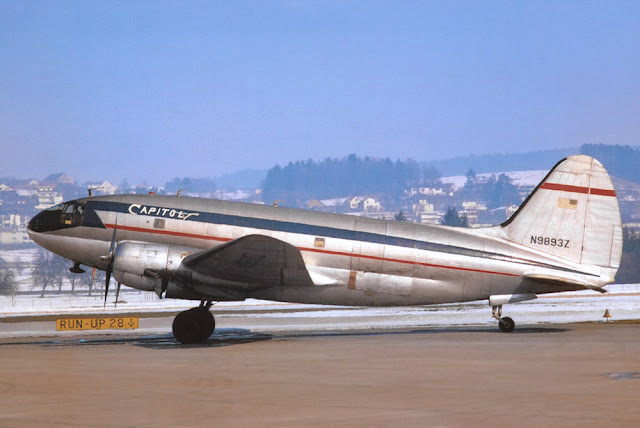 Incoherent rambling by Hawk914 at 9:09 PM No comments:

Today we present a fine photo showing three examples of the North American FJ-1 Fury, only thirty of which were built and a type which could not be labeled as 'resoundingly successful'. Nonetheless, it was a stepping stone to greater things, ultimately leading to the F-86 Sabre.

Flown by the Naval Air Reserve outfit based at NAS Oakland in California, these FJ-1s, including BuNo. 120353, the jet nearest to the camera, were photographed in August of 1950, just a few years before the type was retired from active service. 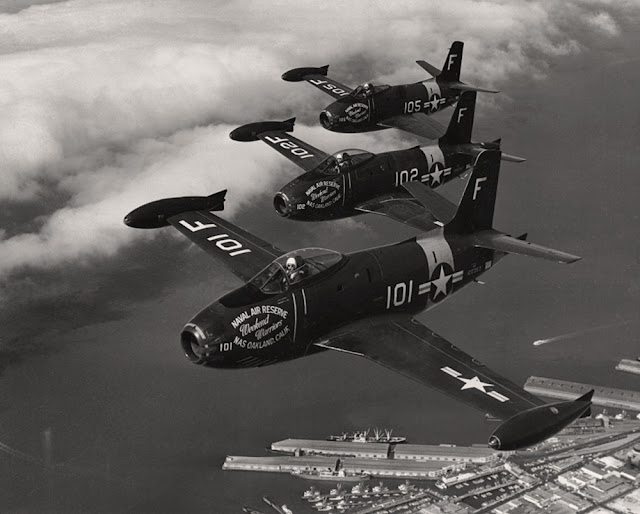 The last of the U.S.A.'s original space pioneers has gone West...

Before he became one of the 'Mercury Seven' and the first American to orbit the Earth, John Herschel Glenn, Jr. was a fighter pilot in the United States Marine Corps, flying combat missions in both the Second World War and the Korean War.

During his first tour of duty in the Korean War he flew the Grumman F9F Panther with VMF-311. It was during this time that he acquired the nickname 'Magnet Ass'... apparently Lady Luck felt that it was Glenn's lot in life to attract more anti-aircraft fire than the rest of his squadron mates. On two occasions he returned to base with a jet that was riddled with more than 250 flak holes.

Glenn flew a second tour in Korea, though this time he was participating in an inter-service exchange program with the USAF, flying a North American F-86 Sabre with the 25th FIS, 51st FIW. It is the Sabre he flew during this second tour that is the subject of today's installment of 'TWW'...

Named 'MiG Mad Marine', and carrying the names of Glenn's daughter Lyn, wife Annie, and son Dave on the nose, the jet also displays three red stars under the windscreen which represent the three MiG-15s he shot down during the tour. 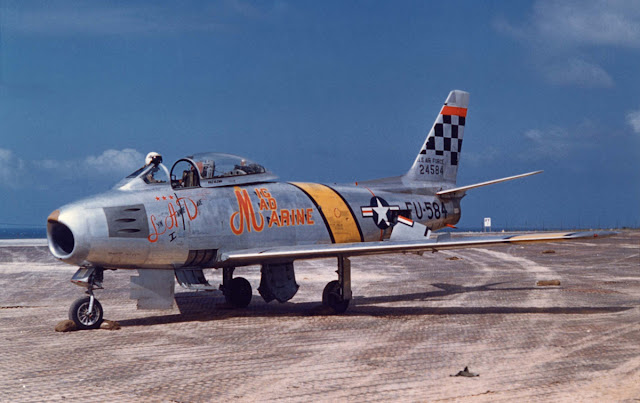 Incoherent rambling by Hawk914 at 2:42 PM No comments:

Today's installment of 'TWW' is about as quick a quickie as you're gonna find around here... enjoy... 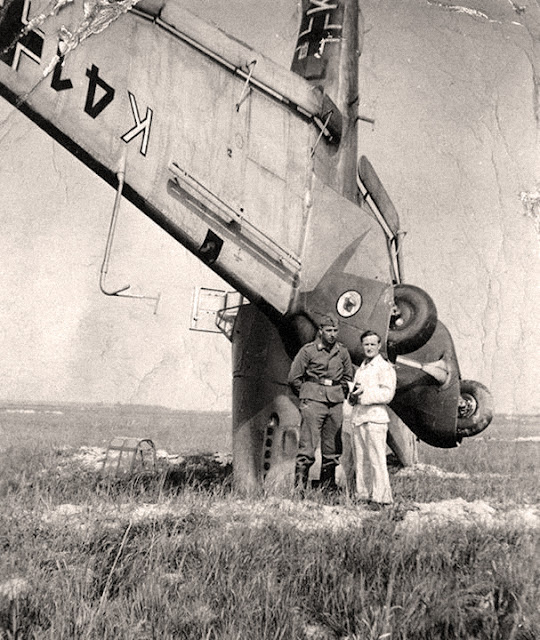 With this installment of 'TWW' we begin what may or may not be a recurring series which we will dub, 'What in the Sam Hill is Going On Here?'

Well, we actually know what in the Sam Hill is going on here... sorta. An American Airlines DC-3 is taking off while a stagecoach rambles on alongside.

What's that? Your blogmeister thinks he can hear the readership of  about half-a-dozen or so exclaim, gratefully, "Thanks ever so much, Captain Obvious!"

Now, the not-so straight dope on this, as we understand it, is that the photo was taken in 1937 and used in an American Airlines advertisement a while later... like, in 1949. Hey, that's what we came up with after a fairly short bit-o-digging on the interwebz. Whether it's 100% accurate or not, we dunno.

Anyhoo, we do know for sure that the photo was indeed taken... 'cuz here it is. 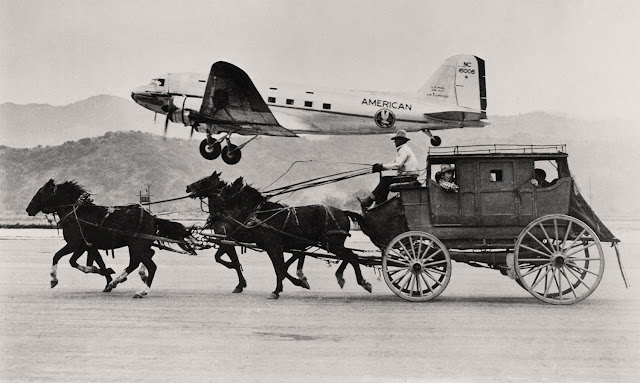 
And we also know that the photo was used in an advertisement, because... you guessed it, here'tis! 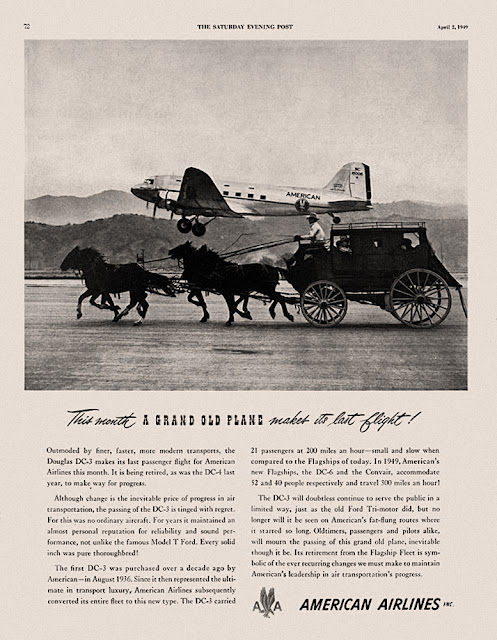 
Other'n that, we don't know what the Sam Hill is going on here.

In our last installment of 'TWW' we shared a photo showing a Lockheed P2V Neptune from US Navy Patrol Squadron Eight and mentioned that said squadron was part of Task Group ALFA when the photo was taken.

Also mentioned was that Task Group ALFA was at the time writing the book on modern combined anti-submarine warfare operations. In other words, they were using all available assets, surface ships, attack subs, and carrier-borne aircraft as well as land-based birds all as one big cooperative team in developing effective tactics and techniques for sub-hunting. 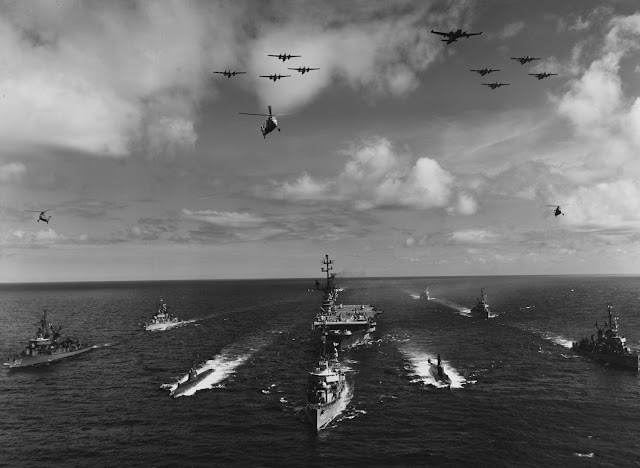 
Here's the Navy's caption for this photo:

Today we bring you a splendid photo showing Lockheed P2V-5F Neptune BuNo. 128328 while she was assigned to VP-8 in 1959. Patrol Squadron Eight was at the time operating as part of Task Group ALFA which was writing the book on modern combined anti-submarine warfare operations. 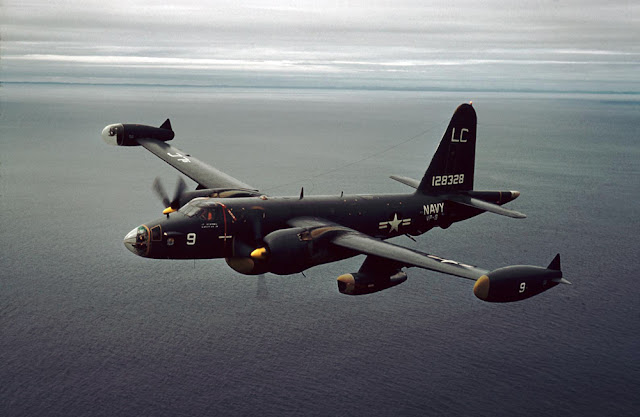