From the mid 1950s to the 1980s, the Douglas A-4 Skyhawk served both the United States Navy and the United States Marine Corps by lugging more than its fair share of things that go boom... and quite admirably, too. (Some have gone so far as to label it the greatest light bomber of all time.) In addition to moving mud the type also served in the equally hazardous training role and, after its retirement from USN and USMC combat units, continued to fly in utility and adversary roles. The A-4 has also flown under the flags of many a foreign nation.

The A-4, or A4D as it was originally designated, was a pretty small bird... likened to a toy by some, which lead to a number of nicknames such as 'Bantam Bomber' and 'Tinker Toy Bomber'. It was also dubbed 'Scooter', apparently on account of its long nose gear strut. But regardless of how small it may have been, or how toyish it may have looked, the Skyhawk was a very nimble airplane... not as fast as some other types, but very quick and maneuverable. This lead to another moniker... 'Heinemann's Hot Rod'... a tip-o-the-hat to the little jet's designer, Ed Heinemann.

We'd initially intended to present a longish feature article on the A-4 today, but instead will spread it out over a few installments... beginning with this trio of photos showing a couple'a early Scooters. 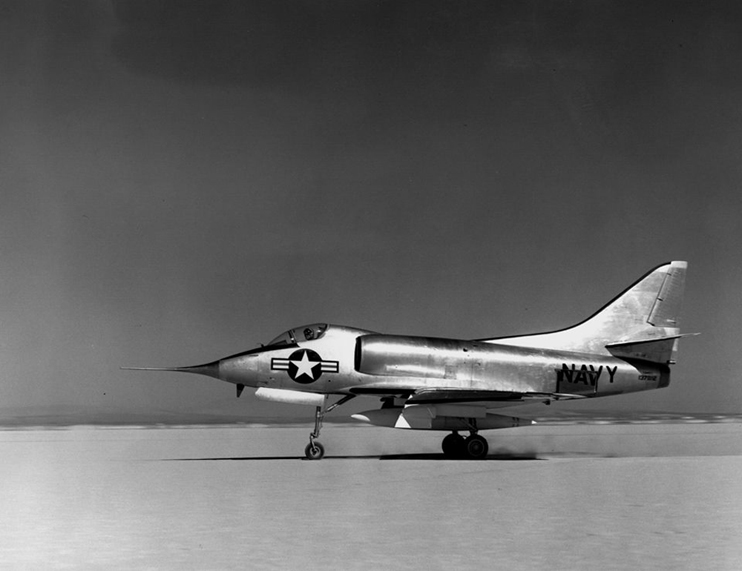 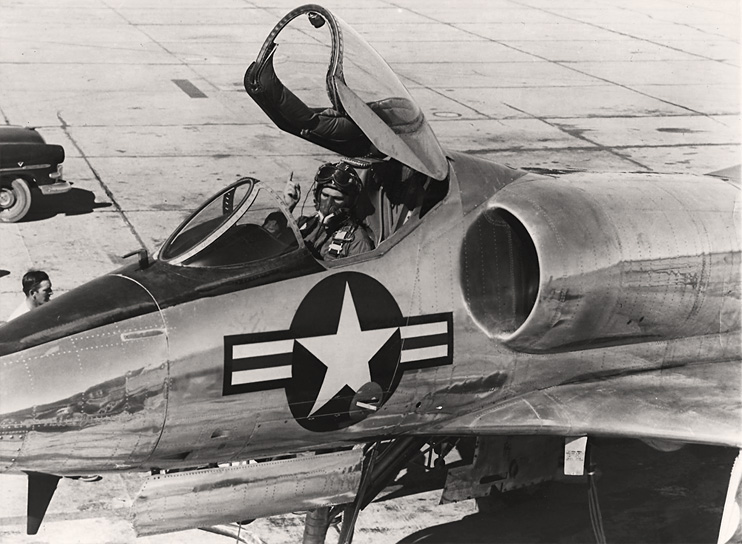 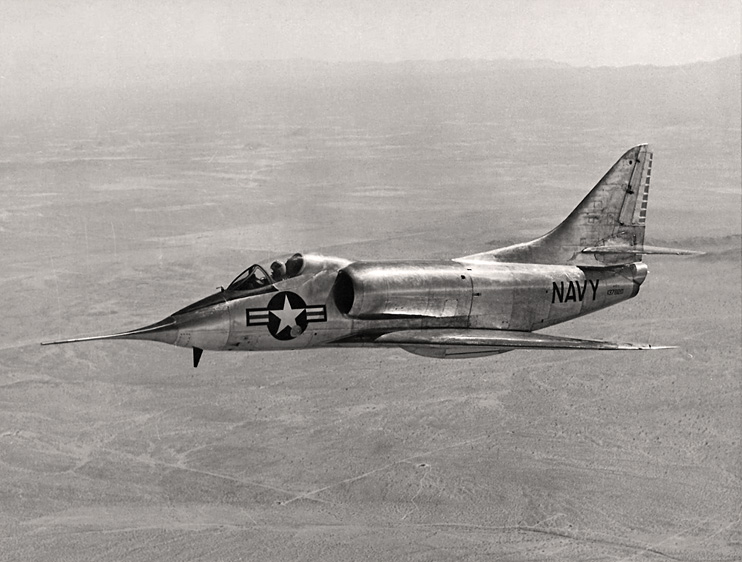 Incoherent rambling by Hawk914 at 6:01 PM No comments:

Today's installment of 'TWW' was inspired by the television series 'The Sixties', currently airing on CNN. When your blogmeister thinks of the 1960s, the Vietnam War invariably creeps into his thoughts at some point or other... and when he thinks of that awful conflict, his head is often filled with visions of the subject of today's post.

The Bell UH-1 Iroquois was the U.S. Army's undisputed workhorse in Vietnam. The 'Huey', as it came to be known, was everywhere and doing just about everything you could think of... personnel transport, cargo transport, patrol duties, insertion and extraction of combat troops into contested areas, direct fire support of troops on the ground, medevac... everything.

Whenever your blogmeister thinks of the 'ole Huey and its participation in the Vietnam War, the image below is usually the first that enters his mind... 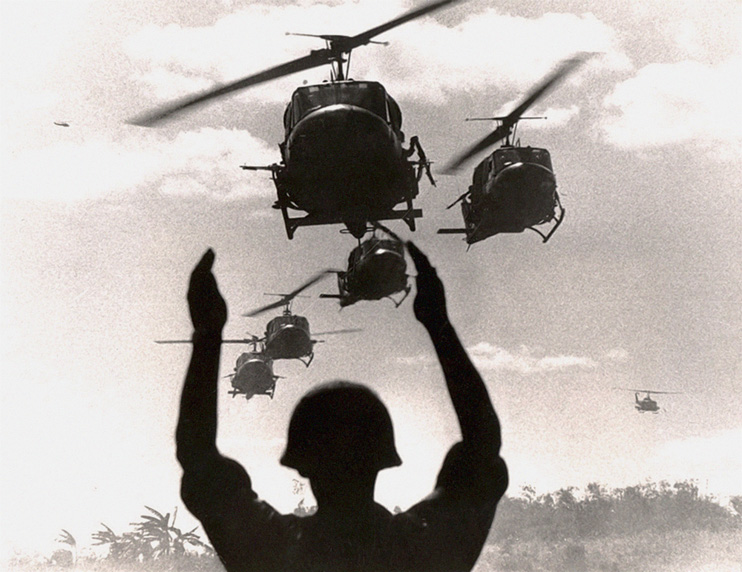 
Here's the news tag from the reverse of the photo, in case you're interested... 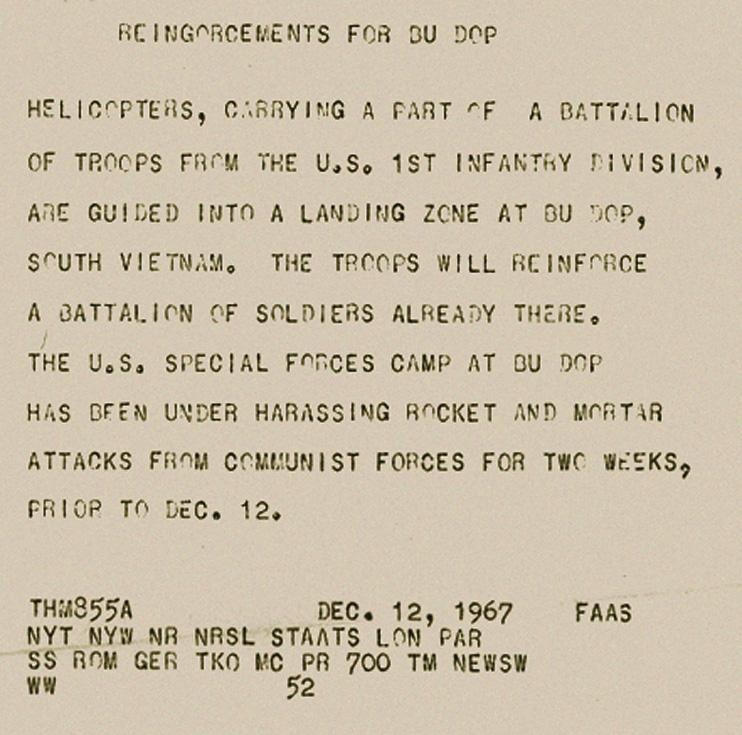 Ever wonder where the name 'Huey' came from? Well, the original designation for the UH-1 was HU-1... 'tis as simple as that. 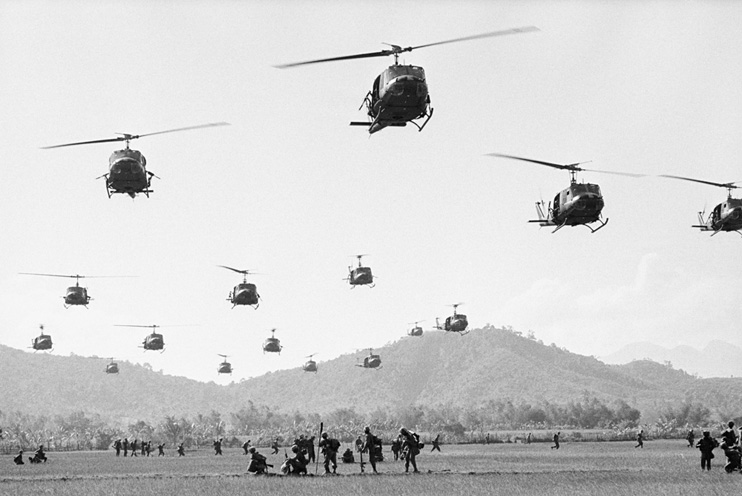 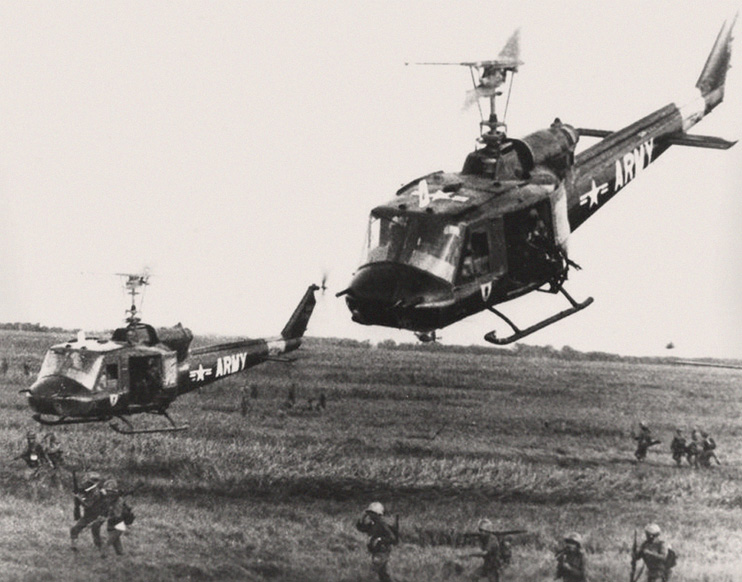 
The info which came with this last photo reads as follows: 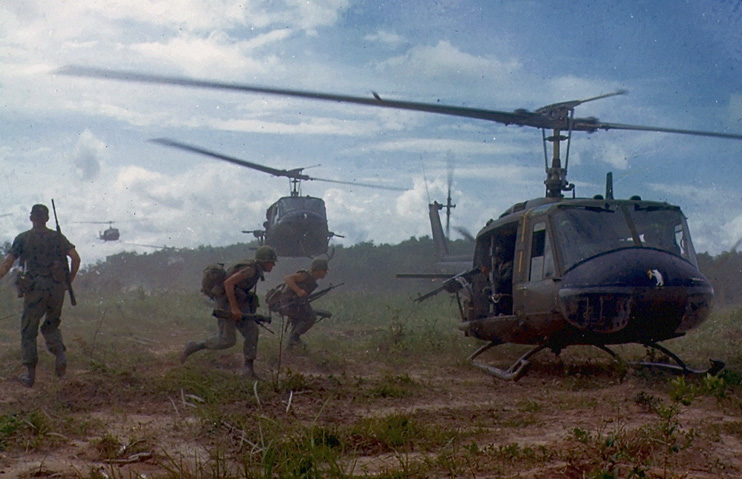 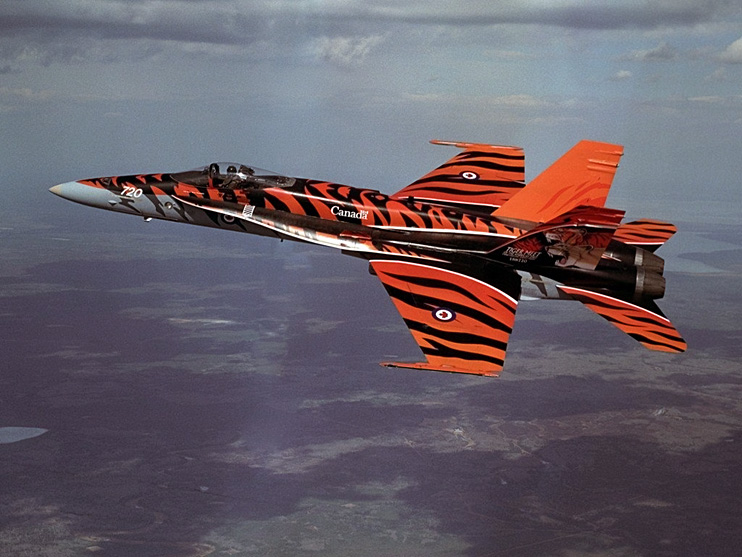 The King Reviews His Fleet

Today on 'TWW' we bring you an old grainy news photo from the late 1930s. The date was May 20th, 1937, to be exact... King George VI was out and about on his modest sailing craft, running his eye over the British Navy during the Coronation Review.

Here's what's written on the news tag from the reverse of the print:


The King Reviews His Fleet

The King to-day reviewed the ships of the British Navy at Spithead, Portsmouth.

Photo shows:- The Royal Yacht "Victoria and Albert" passing an English Battleship, while aircraft of the Fleet Air Arm fly past the Royal yacht.


We don't know which battlewagon that is, but the birds are of the Fairey Swordfish Mark I variety and are from 811 Squadron, which flew from HMS Furious. 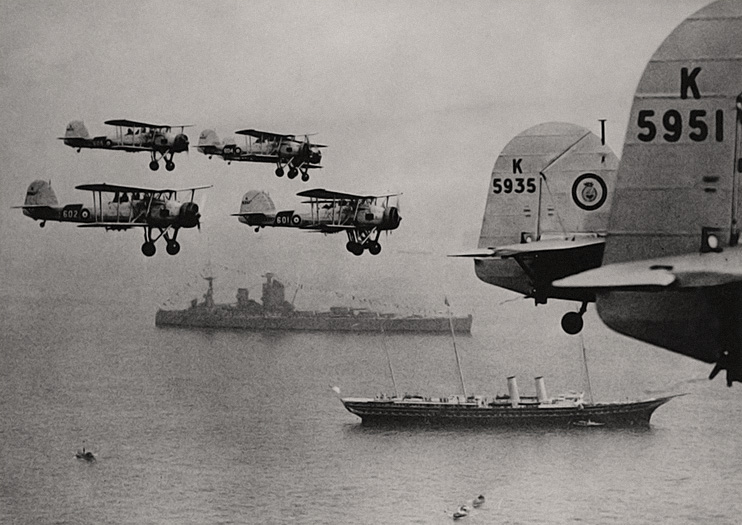 Incoherent rambling by Hawk914 at 6:30 PM No comments:

Today we bring you something that's just a bit off to the side of the beaten path...

The Spanish Civil War, which raged from July 1936 to April 1939, served as something of a proving ground for the weapons and other military hardware of a number of nations. Several countries actively supported one side or the other during the conflict... some openly, others not so much... but of all these participants, perhaps the most notable was Germany. 'Ole Adolph and his pals sent an expeditionary force known as the 'Condor Legion' to fight on the side of Franco's Nationalists.

A total of six Hs 126A-1s were delivered to A/88, performing well in the reconnaissance and light bomber roles. One was lost, presumably to enemy fire... though your blogmeister does not know for sure. After the end of the conflict the remaining Henschels were apparently left in Spain for use by the Spanish Air Force.


So, without further adieu, here's a groovy shot of one of the six Condor Legion Hs 126s... 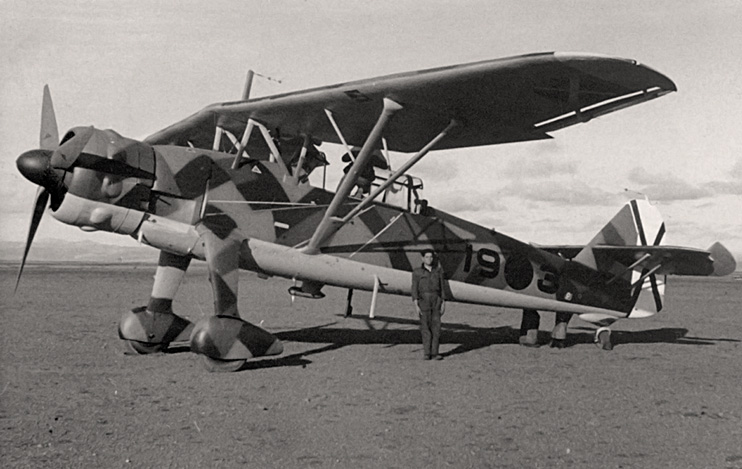 Today we bring you another tiger-striped installment of 'TWW'... this time our subject hails from the Great White North. 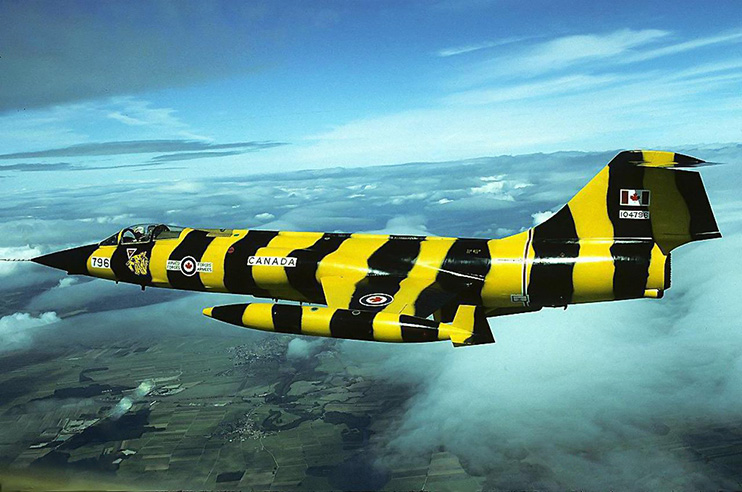 Today we take a break from bright-colored fast-movers to bring you this groovy photo of the 'Dixie Clipper' being towed ashore while resting on its beaching gear.

One of twelve Boeing 314s constructed, the 'Dixie Clipper' was chosen to fly President Franklin D. Roosevelt to the Casablanca Conference in January of 1943. 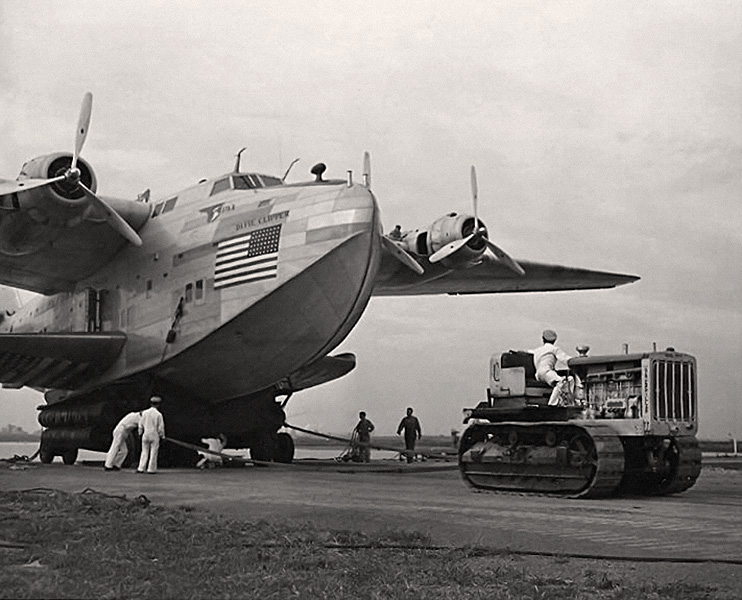 First thing's first... your blogmeister doesn't know much French and had to resort to an online translator for the title of this installment of 'TWW'.
So no angry notes about his horribad French, s'il vous plaît.

Alrighty, with that outta the way, we bring you these fine photos of a Mirage 2000C from the now disbanded French Air Force outfit Escadron de Chasse 01.012. The paint she wears was applied for the 2010 event... 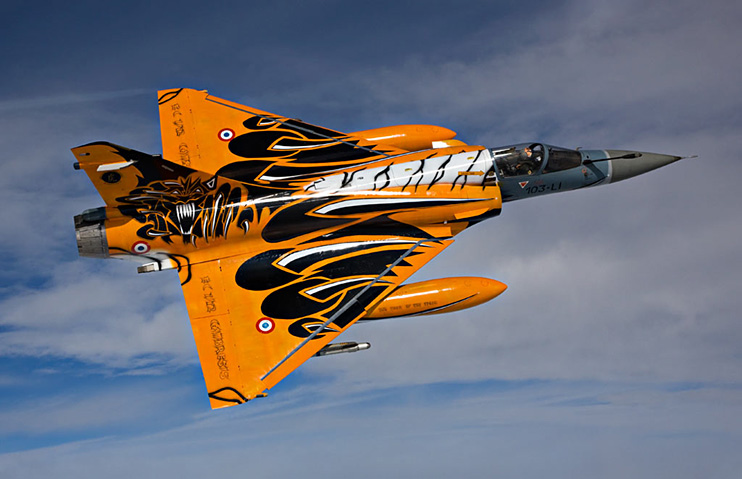 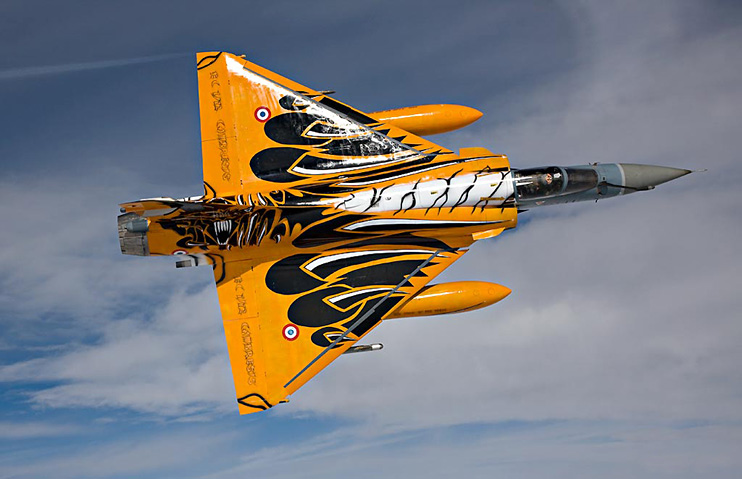 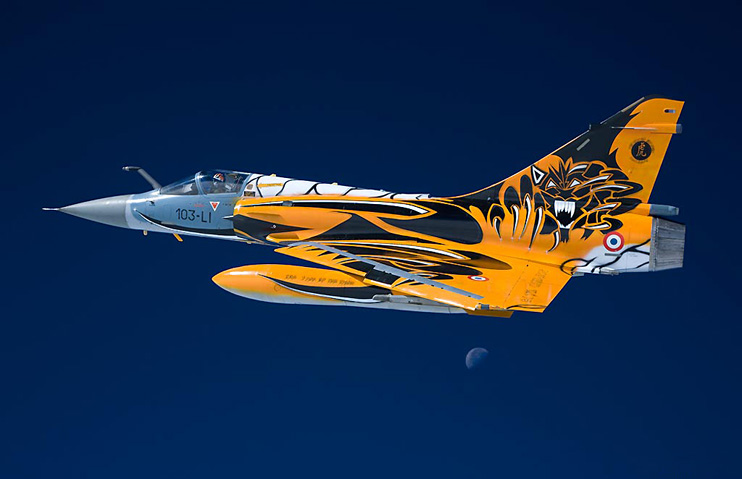 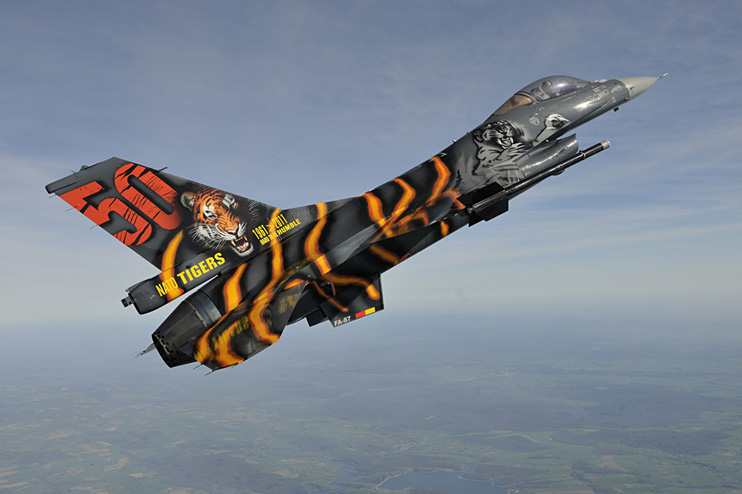 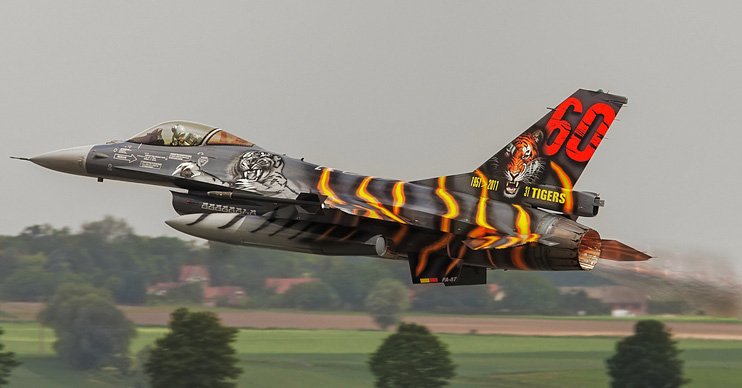 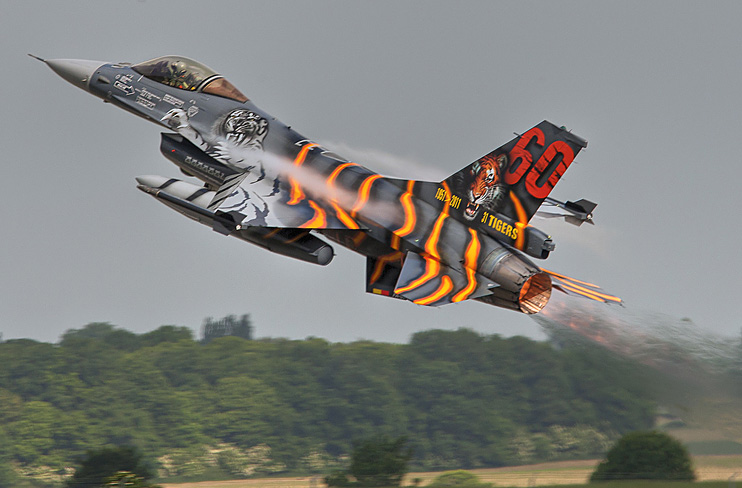 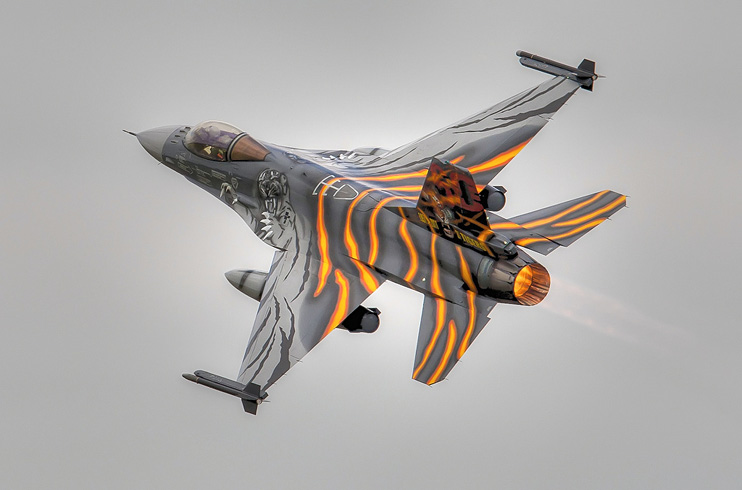 A SLUF in Tiger's Clothing

Alrighty, a couple'a installments back we mentioned that we'd be posting some specially-painted 'Tiger Meet' birds in the coming days. Well, here's another eye-catcher... this time an A-7 Corsair from 335 Squadron of the Hellenic Air Force... although, to be honest, we're not sure if it's actually a 'Tiger Meet' paint scheme or not. It may just be a squadron anniversary scheme.

In the end, we don't really give a rat's posterior as to why they slapped all that paint on this SLUF (Short Little Ugly F... uhhh... Fella).
Any way you slice it, it's super-freakin' groovy lookin'... 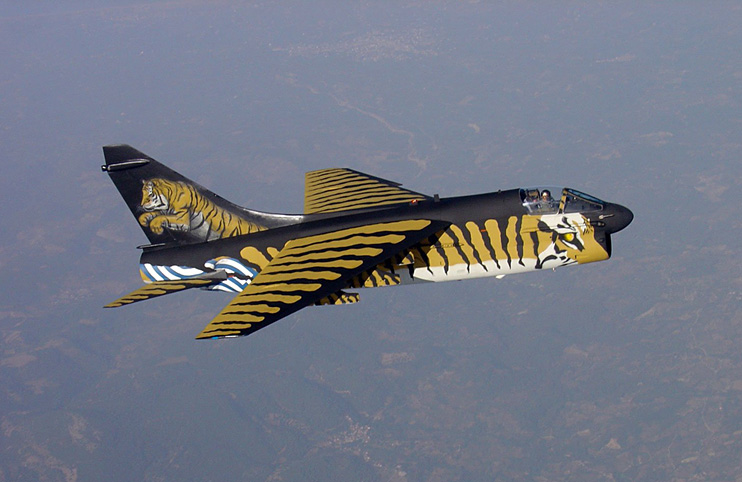 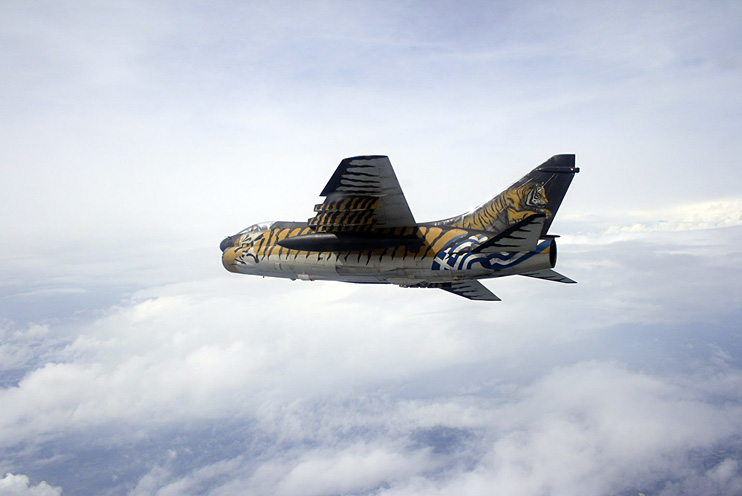 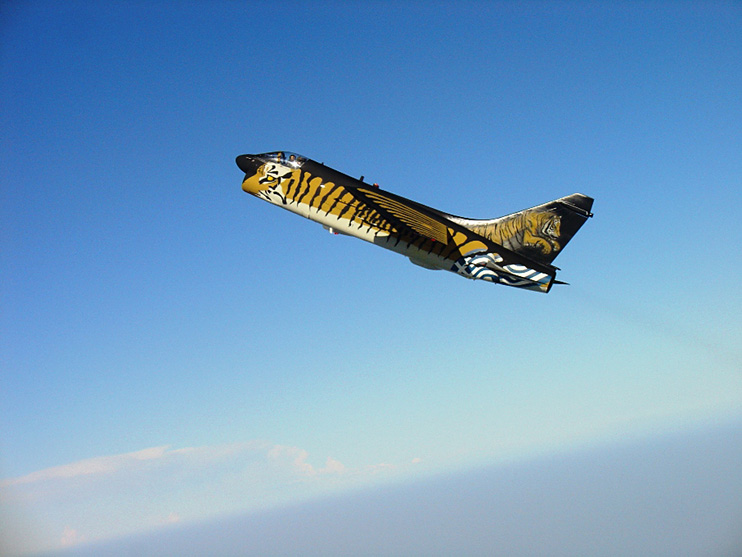 Incoherent rambling by Hawk914 at 8:15 PM No comments:

The Battle of Midway began on June 4th, 1942 and ended three days later, on the 7th. The overall story of that battle won't be told in this installment of 'TWW', as it can be read elsewhere... in multiple places... and in much more detail than we're prepared to provide just now.

Instead, we'd like to focus on a sole survivor of Torpedo Squadron Eight.

No, not that sole survivor...

Well-known is the story of Ensign George Gay, pilot of one of the fifteen TBD Devastators of VT-8 to launch from the USS Hornet on June 4th, 1942 for an attack against Japanese aircraft carriers near Midway Island. All fifteen TBDs were shot down, and Ensign Gay was the only survivor of the thirty VT-8 aircrew who launched from Hornet that day. This man's story has been oft told over the decades, and your blogmeister considers himself fortunate to have heard it from the man himself.

But it is not Ensign George Gay's story that will be told here.


At the time of the Battle of Midway, Torpedo Squadron Eight was in the process of trading in its old Douglas TBD Devastators for brand-spankin'-new Grumman TBF Avengers. The outfit had deployed aboard Hornet with the older TBDs and left a detachment Stateside to work up with the TBFs. This detachment flew across the USA and on to Hawaii, where orders were received to send six TBFs on to Midway Island to reinforce the USMC defenders stationed there.

Among these six Avengers was TBF-1 BuNo. 00380... the first Avenger delivered to VT-8 and the subject of today's installment of 'TWW'. 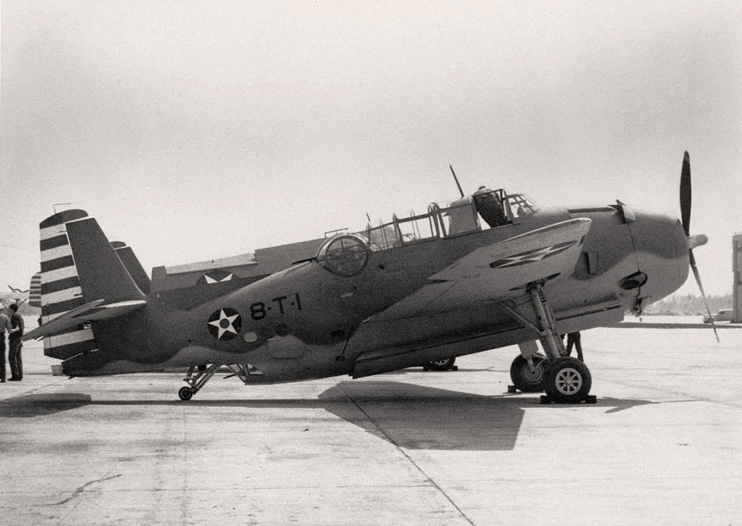 
Along with her five sisters, '8-T-1' arrived at Midway on June 1st, 1942 after a 7.5 hour flight from Hawaii, guided by two PBY Catalinas. The VT-8 aircrew were welcomed to the island with the news that a Japanese attack was imminent. Three days later Japanese ships were spotted about 150 miles West of Midway, and the six VT-8 Avengers were among the attacking force launched from the island early that morning at roughly 6AM.

The Avengers were in the air for about an hour, almost reaching the Japanese fleet, before being intercepted by Japanese fighters... Zeroes... and all of the TBFs but '8-T-1' were eventually shot down. Things weren't all that rosey with the sole survivor, either... Manning, the turret gunner, had been killed shortly after calling out the attacking Zeroes and briefly returning fire. Ferrier, the radioman and belly gunner, had been wounded and rendered unconscious for a time. Earnest, the pilot, was also wounded and grappling with a badly shot-up airplane. He'd lost elevator control, though still had ailerons and rudder. Thinking there was no way he could reach the still-distant Japanese carriers, he spotted a light cruiser off to port. He managed to line up on the cruiser using rudder and ailerons and drop his torpedo. It was at this point, upon almost crashing into the water, that Earnest discovered that he could use the elevator trim tabs to climb and descend. So he maneuvered around the Japanese fleet and headed back to Midway, surviving yet more attacks by Japanese fighters.

Upon arrival at Midway he found that there was no hydraulic pressure and that the landing gear would not come down. He tried the emergency release system, but only the left wheel extended. Trying unsuccessfully to shake the right wheel down, he finally decided to land with just the one wheel. After two aborted landing attempts, he set '8-T-1' down... spinning around and coming to rest at the side of the runway. 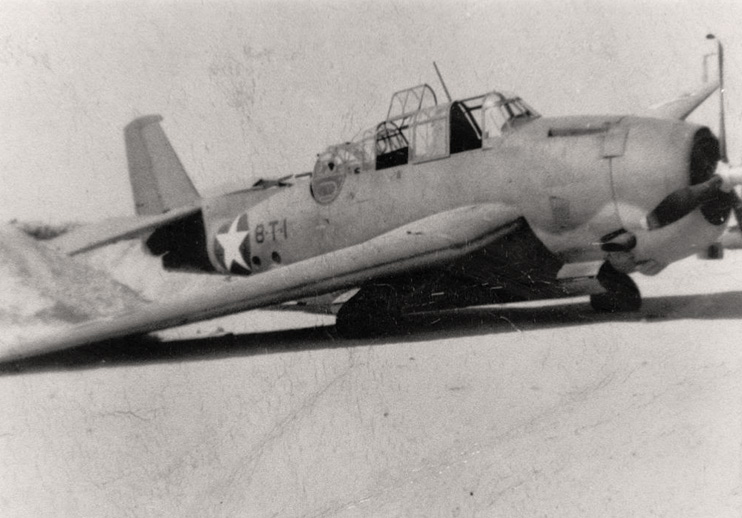 
Here's some photos taken a few weeks after the fact, showing '8-T-1' being prepared for shipment back to the USA for post-battle evaluation.

We're not sure if she ever flew again. 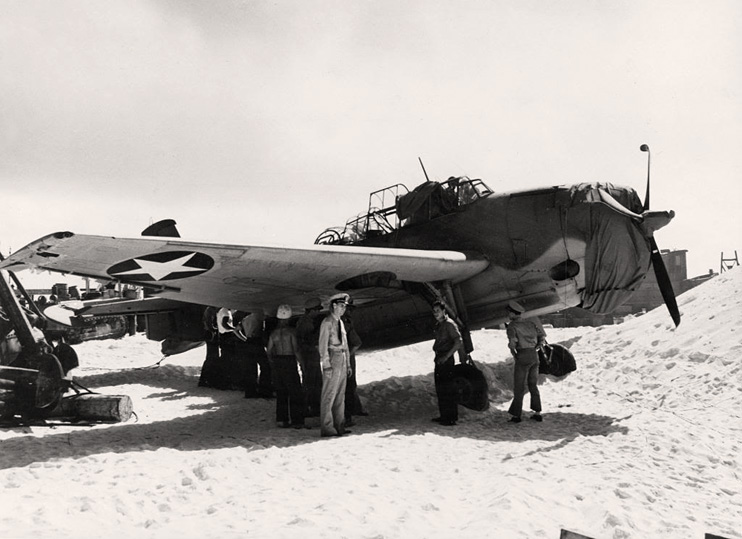 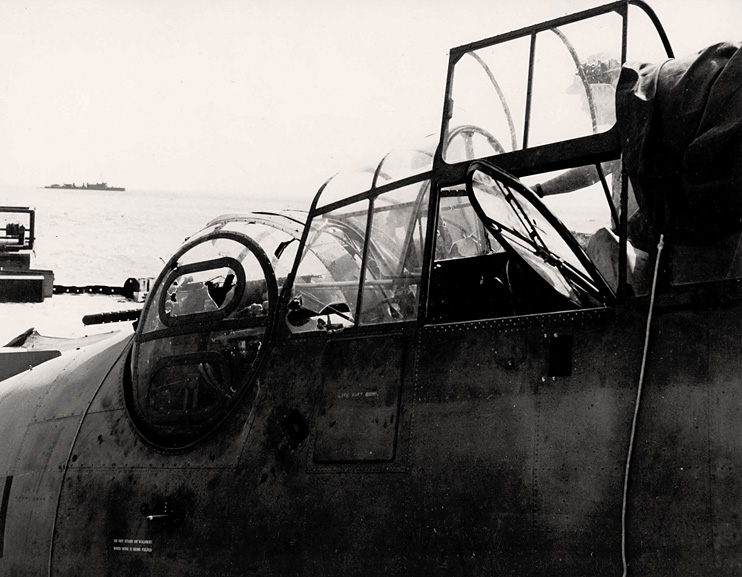 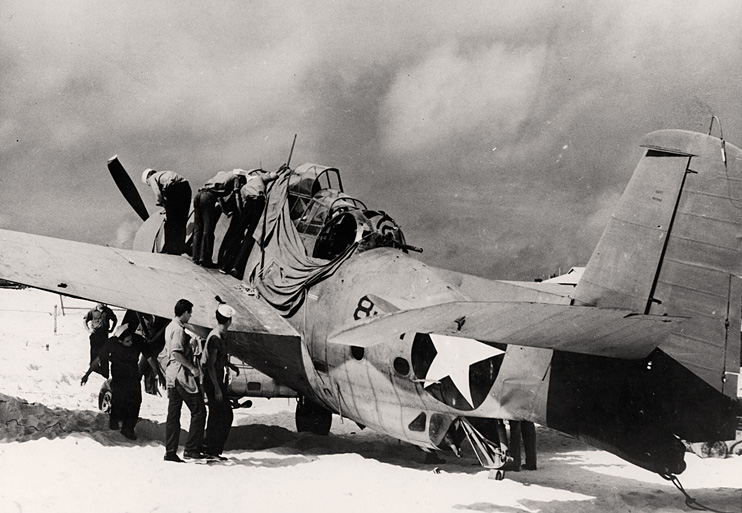 
Earnest and Ferrier recovered from their wounds and continued to fly together. As a result of their participation in the fighting on June 4th, 1942, they were each awarded the Purple Heart as well as two Navy Crosses for Earnest and a Distinguished Flying Cross for Ferrier.


Here's a photo showing the pair with their second turret gunner at Henderson Field, Guadalcanal in September of 1942. 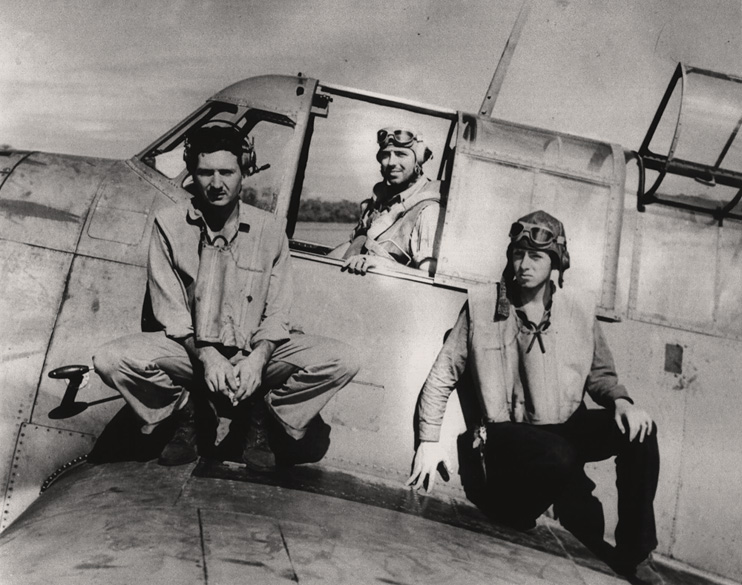 
And that is our brief account of the story of '8-T-1'... the 'other sole survivor' of Torpedo Eight.

You can read more detailed accounts of this mission by Albert Earnest HERE and by Harry Ferrier, as well as another by Earnest, HERE.

Hard to Be Humble

Like many wingnuts, your blogmeister digs airplanes with wild paint schemes... and among his favorites are some of those which have appeared on aircraft taking part in an annual event known as 'Tiger Meet', which is organized by the NATO Tiger Association. Think of it as something of a glorified military flying club made up of squadrons from the air arms of various NATO countries... squadrons which have as their unit emblem or heraldry a tiger or other 'big cat'... squadrons which are among the 'best of the best'... squadrons whose personnel, armed with this knowledge, find it hard to be humble...

With the 2014 'Tiger Meet' just around the corner we thought it appropriate to present over the coming days some photos of notable past participants, starting with this French Air Force Mirage 2000C of EC 01.012 from the 2003 event. Over the years there have been many flashy tiger-themed paint schemes, but this one was arguably the most... eye-catching... pun intended. 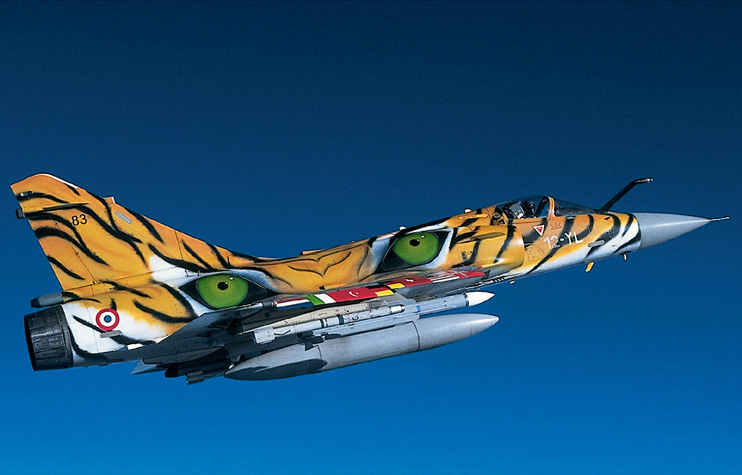 Incoherent rambling by Hawk914 at 8:04 AM No comments: