Today's installment of 'TWW' features one of our favorites... the Grumman F-14 Tomcat.

In this photo we see 'Gypsy 111', an F-14A of VF-32 Swordsmen passing over the USS Theodore Roosevelt during an UNREP... an underway replenishment. During an UNREP fuel, munitions, food, etc. are transferred to the carrier to keep the ship at sea for extended periods of time... basically, when they need to 'go shopping', the supermarket comes to them.

Anyhoo, we kinda thought this was a cool shot... enjoy... 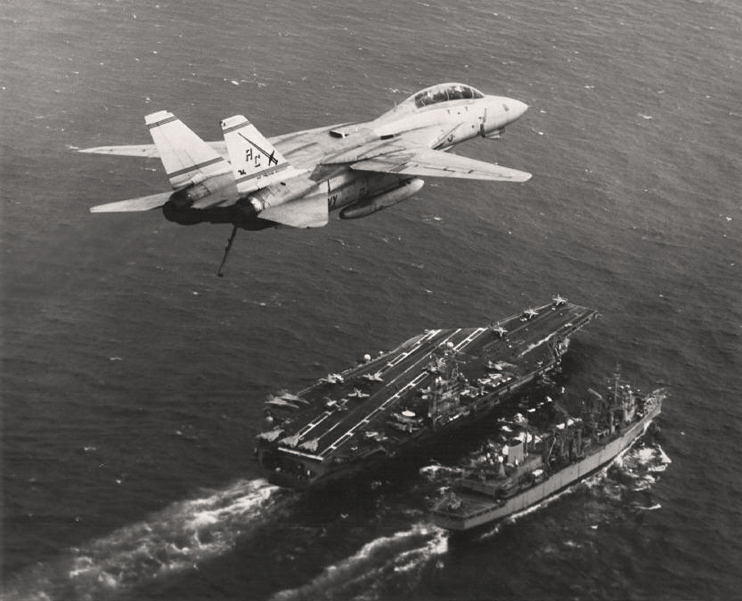 Having polled our readership of about half-a-dozen or so as to subject matter for future installments of this-here cyber rag, one suggestion received was that we share some 'skin pix'... you know, birds sans some'a their feathers. (cue cat-calls and bronx cheers) So, then, here's one by request... and it may just be the start of a recurring series...

We don't have an exact date for this, but one day between September 1965 and December 1967 a US Navy SPAD pilot from VA-145, flying from the USS Kitty Hawk, found himself feet dry and in a bit-o-trouble, as the fan had stopped turning. His best option was to put 'er down at a friendly airfield, which turned out to be a little 'ole place called Duc Hoa, home to a US Army observation outfit, the 74th Recon Airplane Company which flew the O-1 Bird Dog. Anyhoo, our SPAD pilot brought his steed in dead-stick and gear-up, scratching up the runway some, as well as the bottom of the bird and ruining a perfectly good prop. When the crash crews reached the Skyraider, our Navy man apparently climbed out of the cockpit and nonchalantly inquired as to the location of the Officers Club. That guy certainly had his priorities straight.

So, here are some pix of the bird in question after having been stood on her gear again and looking a bit worse for wear while being prepped for a lift back to the flattop by a CH-54 Skycrane. Only a few feathers have been stripped away here, but we hope this is satisfactory for the fella who made the request. 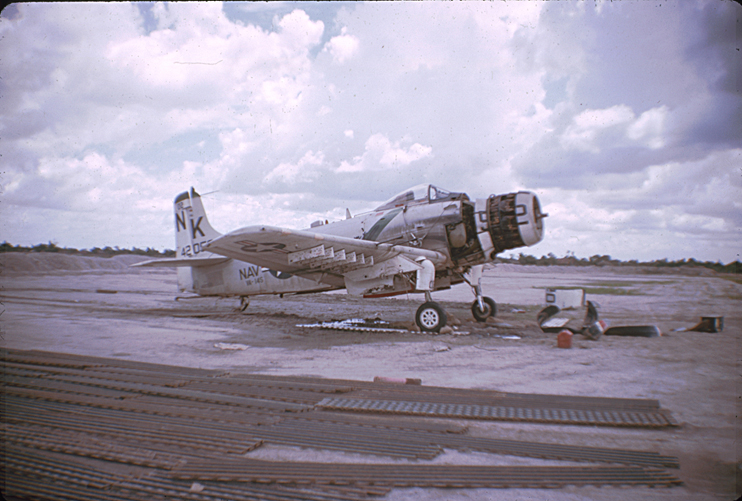 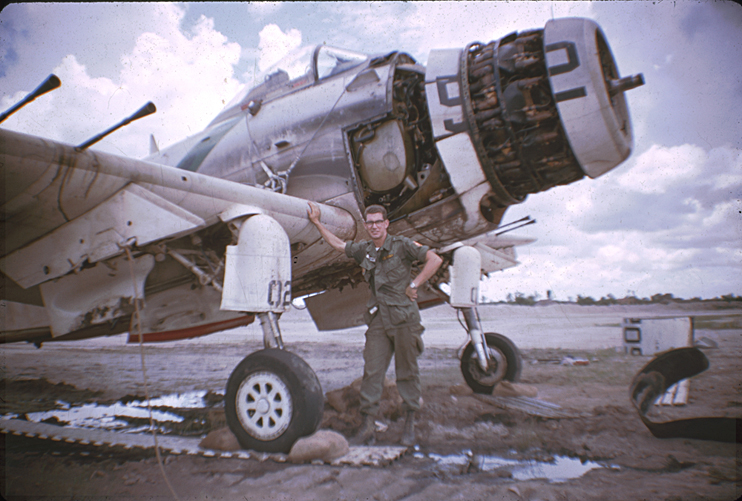 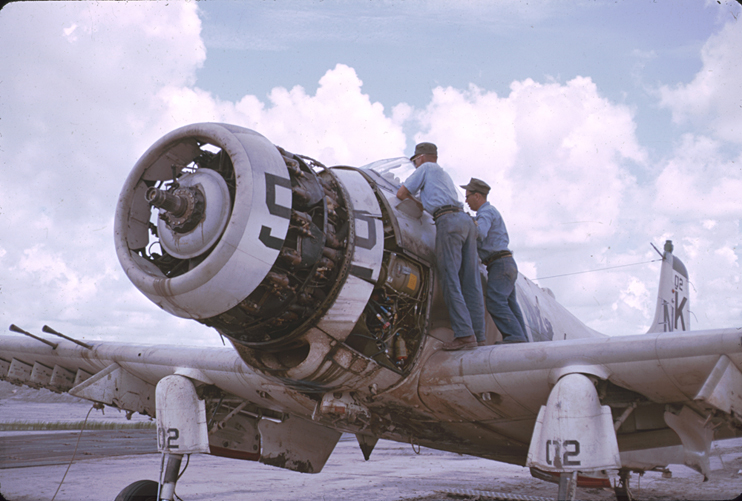 Willows Singing On the Breeze

Today we bring you quite an atmospheric quickie... pre-war Japanese Naval Flying Cadets learning their trade with the Yokosuka K5Y 'Willow' under idyllic skies. 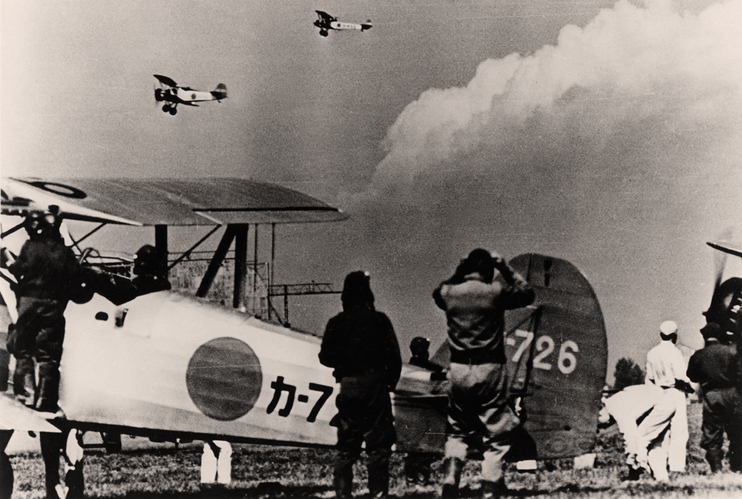 Today we bring you a groovy shot of a not-so-well-known bird from the land of pasta, meatballs, really tasty bread, and the Mafia. Admittedly, your blogmeister knows little about most Italian aircraft of the Second World War... or any other era for that matter. But he sure does dig 'em.

Anyhoo, here's what we know... or think we know... about this-here really cool pikshur: the bird is an IMAM (Industrie Meccaniche Aeronautiche Meridionali) Ro.37 Lince (Lynx) of 39 Squadriglia Osservazione Aerea (39th Aerial Observation Squadron), the paesaggio (landscape) down there is apparently France (France), and the anno (year) is apparently 1940. 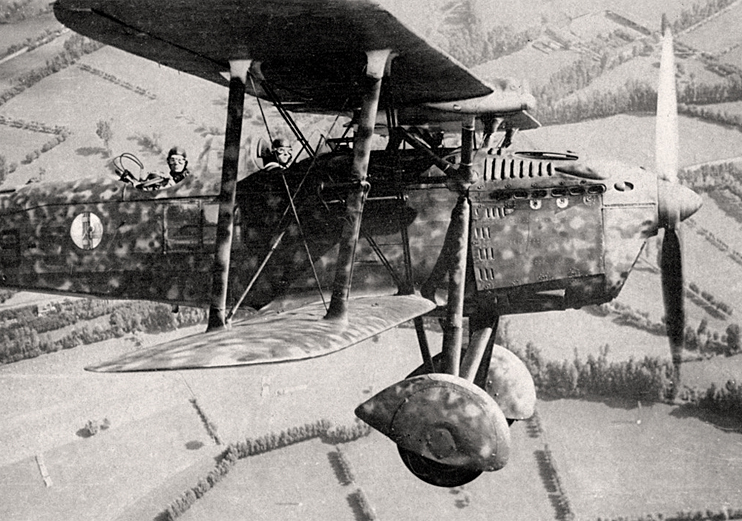 
Today we bring you a quickie... 'tis an original period post card showing a Ju 87 Stuka during engine installation at the factory. 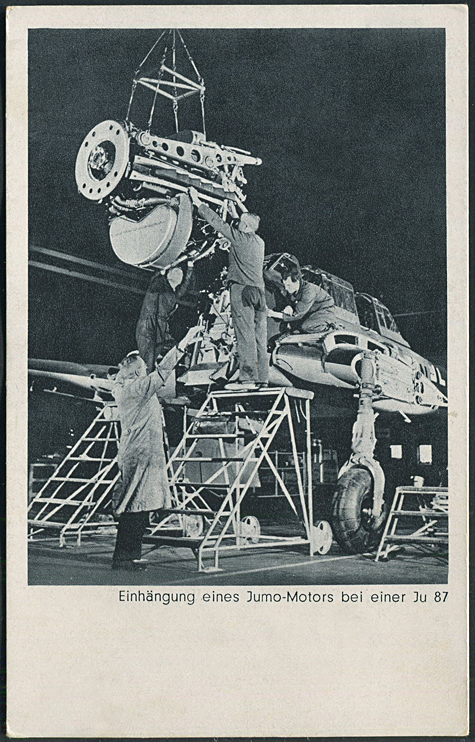 A couple'a installments back we shared a photo showing two F-86As of the 91st Fighter Interceptor Squadron on takeoff. Well, since then we've come across this color shot showing one of the jets from that other photo... enjoy... 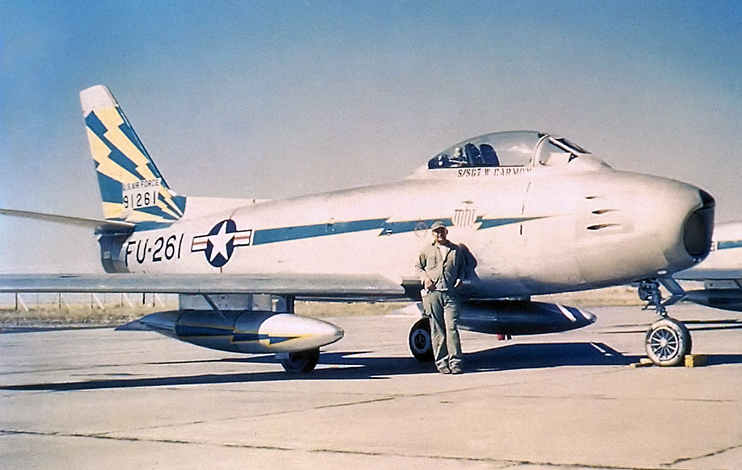 Around these parts we like us some color... particularly color as done by US Naval Aviation in the latter half of the 20th century, especially if it's emblazoned on birds that are painted gull-gray and white. So, from back in the colorful glory days of NAVAIR, we bring you some color, courtesy of a few RONs that were assigned to Carrier Air Wing Seven aboard the USS Independence during her Med Cruise from March to October 1977.

From top to bottom, we see: 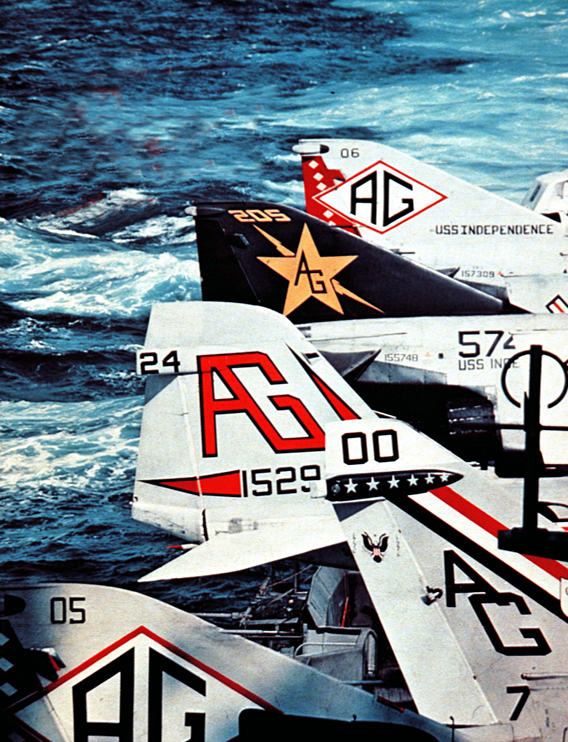 US Navy photo - published in 'All Hands', February 1978 via Wiki Commons


Most notable among the five is the A-7; this jet was VA-66's CAG bird. Each squadron from an air wing has one aircraft assigned to the air wing's commander, referred to as the 'CAG bird' or 'CAG jet', and it's almost always the most colorfully decorated aircraft of the squadron. The acronym 'CAG', which means 'commander air group', is actually a holdover from the days when a carrier's complement of aircraft was known as a 'carrier air group'. Why the old moniker was kept we don't know for sure... but our guess is that, as acronyms go, 'CAG' simply rolls off the tongue a bit more smoothly than 'CAW'. Anyhoo, VA-66's CAG bird is notable in this instance because it still carries the special markings applied the previous year for the USA's Bicentennial celebrations and is therefore just a bit more colorful than would otherwise be the case.

Another quickie today... this time we bring you a super-groovy shot showing a pair of F-86A Sabres from the 91st Fighter Interceptor Squadron, the 'Blue Streaks', just after leaving the runway. The photo was possibly taken at Moses Lake AFB, Washington in 1950. 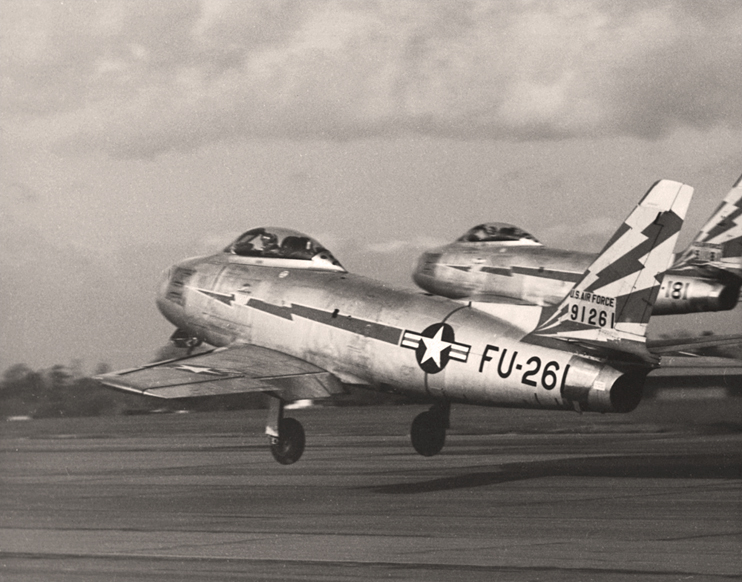 Incoherent rambling by Hawk914 at 6:24 PM No comments:

A quickie this time 'round...

Your blogmeister has stated a number of times in the past that he rather fancies this bird or that a bit more than all the rest. Well, here's another he holds just a bit higher than the masses; the Vought F-8 Crusader... also known as the Gunfighter. And in this particular photo we see a Gunfighter from one of your blogmeister's favorite US Navy FITRONs, VF-191 Satan's Kittens, about to trap aboard the USS Oriskany, CVA-34, off the coast of California back in 1970. 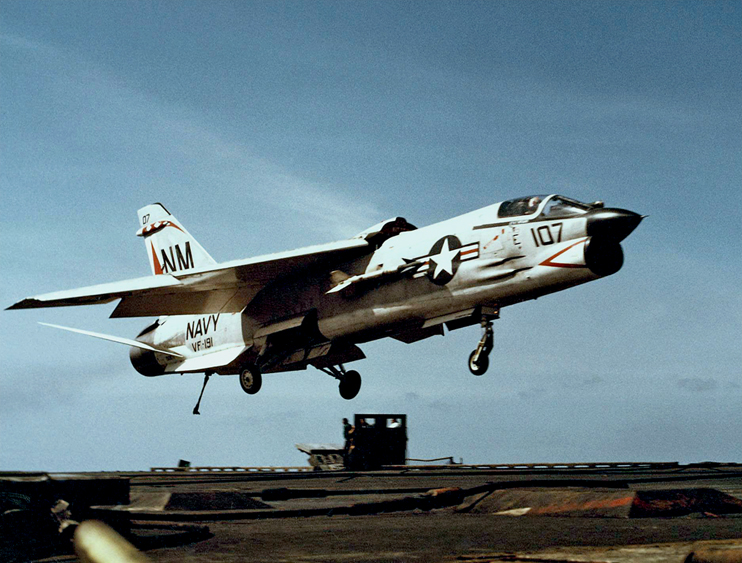 US Navy photo via the National Naval Aviation Museum

Interrupting our series on the P-51 once again...


The Brewster Aeronautical Corporation's legacy is one of failure. Through a combination of poor designs and production techniques and, most importantly, utterly deplorable management, Brewster would seem to have been doomed from the start. Its greatest achievement, the F2A Buffalo, could be termed only a moderate success at best, with two other original Brewster designs, the SBA/SBN and SB2A Buccaneer, each barely worthy of the term 'successful'. Even the F3A-1, Brewster's license-built variant of the otherwise grandly successful Vought F4U Corsair, was deemed a failure because of substandard materials and components as well as poor overall workmanship.

When war came for America in 1941, only the Buffalo was to see action with American combat outfits... and then only very briefly during the early months of fighting. Past mid-1942, the Buffalo and all other aforementioned types, including the license-built Corsairs, would see service only with training units. Obsolete well before entering production in 1941, the mere thirty examples of the SBA/SBN to be produced (and produced by the Naval Aircraft Factory, not by Brewster) were withdrawn from service in August of 1942 and scrapped or relegated to duty as instructional airframes for ground crews.

If the poor records of all these types produced by Brewster were deemed detrimental to the company's health, then the XA-32 could be considered its death knell.


The XA-32 was slow in jumping from the drawing board to the production floor... its first flight was on May 22nd, 1943... nearly two years after it was originally designed. The type was also slow... well, it was just slow... and fell short in nearly every other category of performance. Maximum speed achieved by either of the two prototypes built was 279mph, which, on the surface, seems to be on par with the type's contemporaries... until you take stock of the fact that that speed was just barely attained without internal armament and other weighty equipment, or external stores... the addition of which naturally degraded performance. 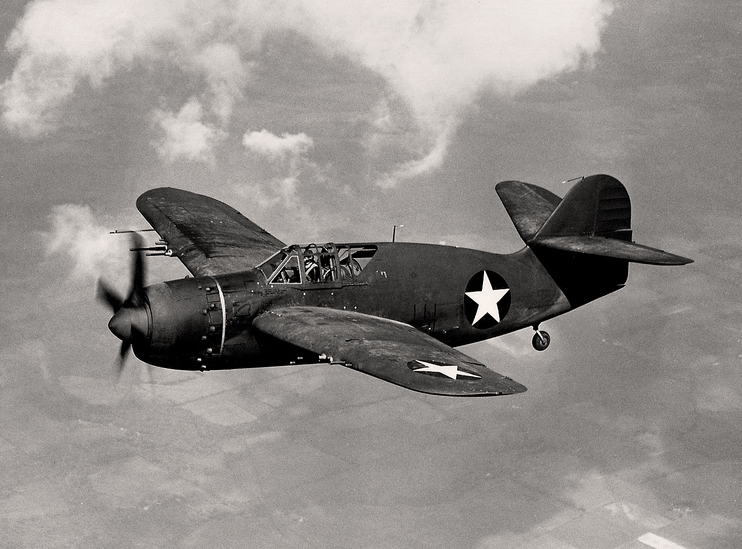 
Long story short, the XA-32 was poorly designed and fell short of projected performance numbers. Waaaaay short. Brewster was already in hot water with the government for its piss-poor management practices and the apparent ineptness demonstrated by the company's design section was the proverbial straw that broke the camel's back. In April of 1942 the government literally seized control of the company, placing the head of the Naval Aircraft Factory, G.C. Westervelt, in charge. 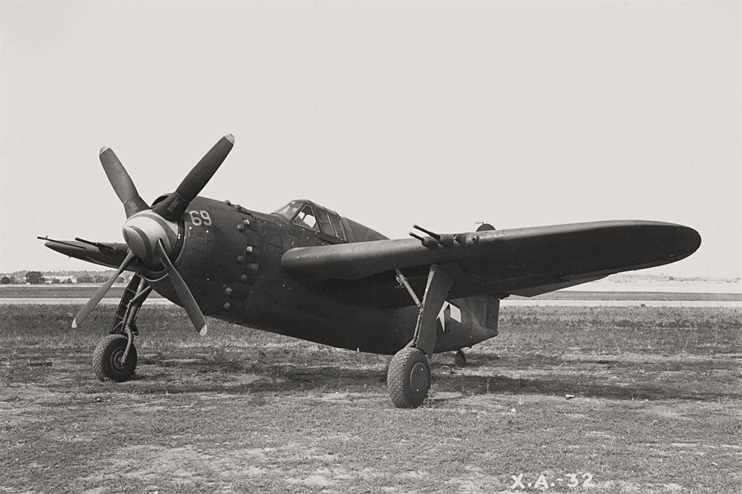 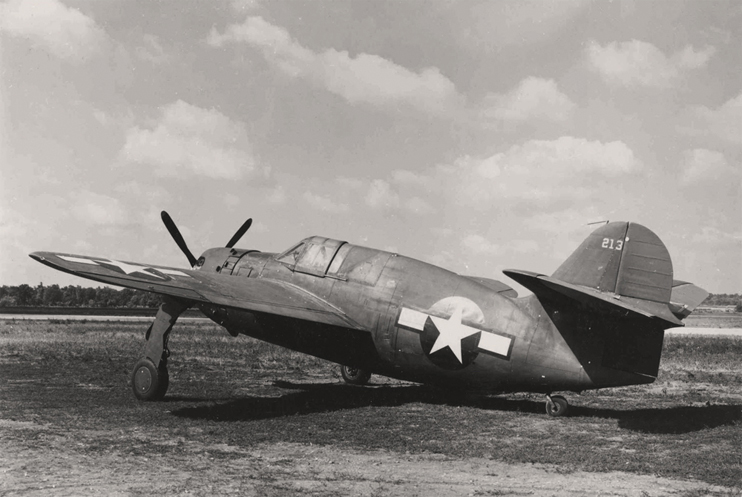 
The XA-32 was the last original design to be built by Brewster and its failure is credited as having put the company out of business. Brewster was shut down in October of 1944, shortly after testing on the XA-32 ceased, and the company was officially dissolved by its shareholders in April of 1946.

Incoherent rambling by Hawk914 at 1:35 PM No comments: