We've said it again and again... we love purty pikshurs around here, and for today's quickie we bring you one. F-18A BuNo. 160775, the first of three initial Full-Scale Development Hornets to be constructed, was photographed against a gorgeous golden sunset in 1979... 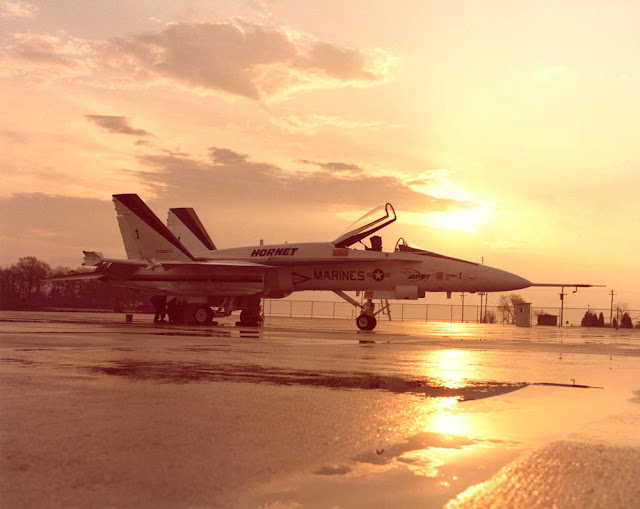 This time around we have a lion cub named 'Simba', kept by Leutnant Franz von Werra of II Gruppe, JG 3 during the early stages of the war. Lions seem to have been a somewhat common mascot in the Luftwaffe, with the name 'Simba' being equally popular. 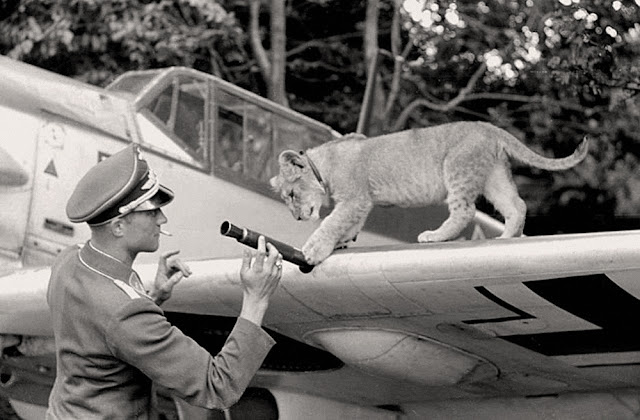 Incoherent rambling by Hawk914 at 7:33 PM No comments:

Today on 'TWW' we present what your blogmeister thinks is a super-groovy photo. The caption in the news tag on the reverse of the print provides only this vague description: "A Spanish Air Force plane flies over Sevilla." The date given is January 16th, 1941. For those among our readership of about half-a-dozen or so who may not be in the know, this 'Spanish Air Force plane' is a Henschel Hs 123.

First used in Spain by Germany's 'Legion Condor' during the Spanish Civil War, the type gained considerable favor with Franco's Nationalists as an excellent ground support aircraft and was given the suitable nickname of 'Angelito'... 'Little Angel'. After the end of the war, the victorious Nationalists purchased the surviving 'Legion Condor' machines as well as eleven additional examples for the Ejército del Aire. 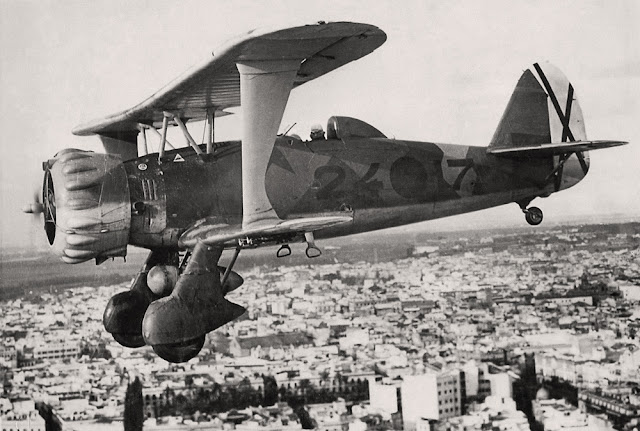 
The Hs 123 was also used by the Germans during the Second World War, especially on the Eastern Front. Production of the type ended in 1940, though, and lack of spare parts saw its retirement from front line service by 1944. At least one Hs 123 is known to have soldiered on in Spanish service until 1945. Sadly, no examples of this robust and, by all accounts, highly effective warplane are known to survive today.

Today we have another quickie for ya'll... a fine photo showing Hawker Demons of 23 Squadron, Royal Air Force, during the 1930s. 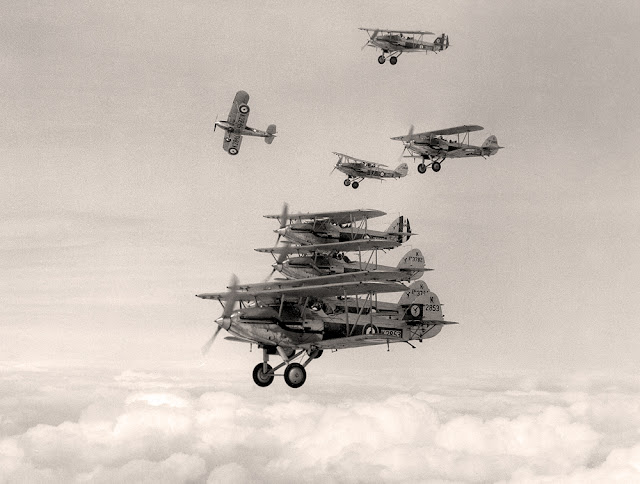 Today we bring you a super-groovy quickie... a photo showing three AV-8A Harriers of VMA-542 'Tigers' during maneuvers sometime in the 1970s. Sorry folks, we don't know much more than that, except to say that VMA-542 was the second U.S.M.C. outfit to convert to the quirky little British jump-jet. 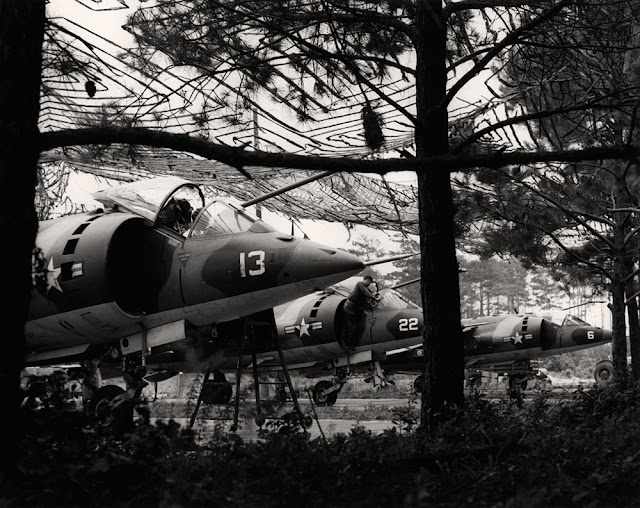 Incoherent rambling by Hawk914 at 4:14 PM No comments:

Mr. Bones and the Six

A couple'a friends of the blogmeister have family who served with the 95th Fighter Interceptor Squadron while that outfit flew the Convair F-106 Delta Dart out of Andrews AFB, Maryland and Dover AFB, Delaware during the very late 1950s and early 1960s.

This one is for you, Kit and Sam! 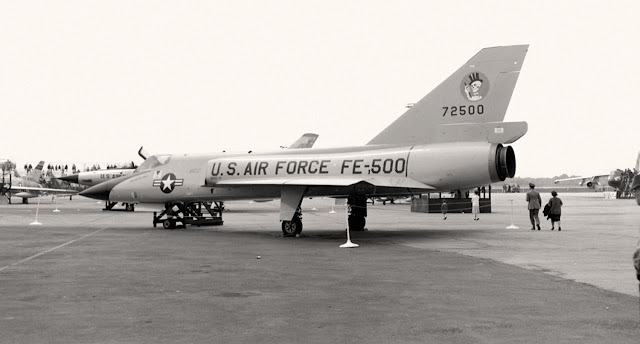 Of all the allied nations to take up arms against the axis powers during the Second World War, Mexico is not one that readily comes to mind, undoubtedly because its involvement was relatively minor.

Mexico's contribution to the allied war machine was the Fuerza Aérea Expedicionaria Mexicana (Mexican Expeditionary Air Force) which comprised a single fighter squadron, Escuadrón Aéreo de Pelea 201 (201st Fighter Squadron). The 201st consisted of thirty pilots and roughly 300 ground personnel, all of whom had undergone training in the U.S.A. before deploying overseas to the Philippines where they were attached to the U.S.A.A.F. 58th Fighter Group, Fifth Air Force.

Based at Porac Airfield, located in the Pampanga Province on the Island of Luzon, the 201st began combat operations in June of 1945, flying alongside the U.S.A.A.F.'s 310th Fighter Squadron and using borrowed aircraft. In July the outfit received its own complement of twenty-five P-47s that were marked with U.S.A.A.F. insignia and theater markings. To these the Mexicans added their own national markings on the upper right and lower left wings, with rudder stripes... all in Mexico's national colors of red, white, and green.

When all was said and done after roughly two months in combat, the men of Escuadrón Aéreo de Pelea 201, who had dubbed themselves 'Águilas Aztecas', the 'Aztec Eagles', had flown 96 combat missions, losing five pilots in the process. Not only did the outfit's pilots see combat, but the ground personnel, too, had occasion to face the enemy with a number of firefights taking place, some of which resulted in Japanese prisoners being taken.

Small as it may have been, the Aztec Eagles' contribution to the war against Japan was no less valuable or welcome than any other.

Here's a fine shot of ship #18 that shows EAP 201's Mexican markings on the starboard wing and rudder. 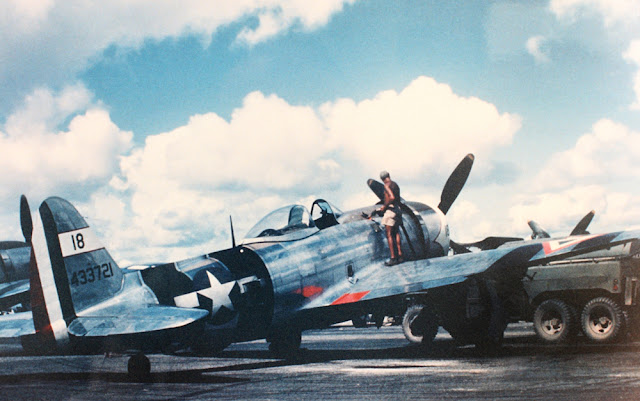 
An earlier shot of the same ship shows the Mexican national insignia under the port wing. 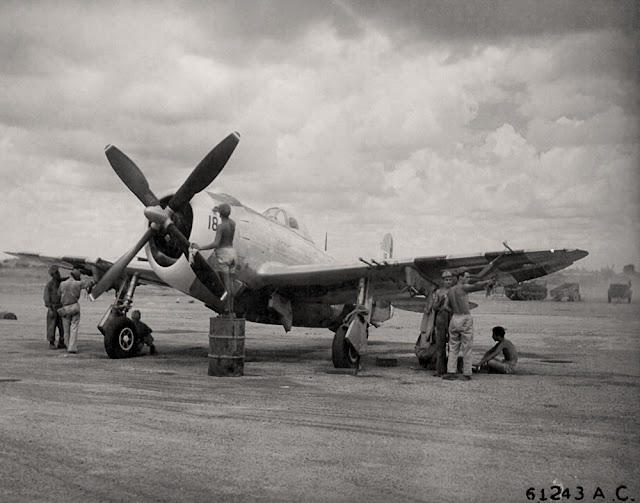 
In his painting 'Strike of the Aztec Eagles!', Jack Fellows captures ship #18, resplendent in its combined American and Mexican markings, rolling in on a target. 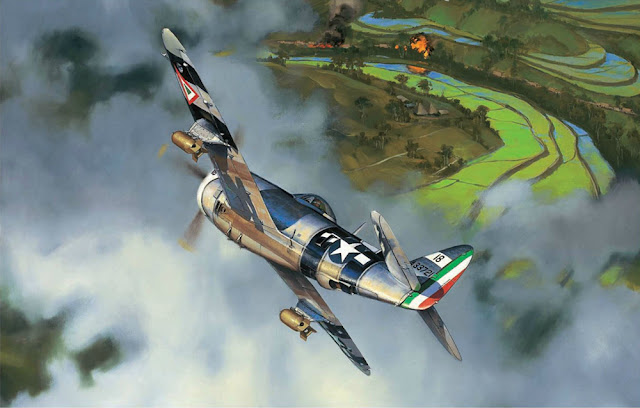 Incoherent rambling by Hawk914 at 4:47 PM No comments:

Aside from being Sikorsky's first widely-produced amphibious flying boat, with a final production count of 101, the S-38 was also a pretty dang cool lookin' bird, reaffirming your blogmeister's belief that the world's best-looking airplanes were built in the 1920s, 1930s, and 1940s.

The type was used by many airlines, both large and small, a few military air arms, and a number of private individuals, the exploits of some of whom, including Howard Hughes and Charles Lindbergh, led to the type being dubbed 'The Explorer's Air Yacht'. 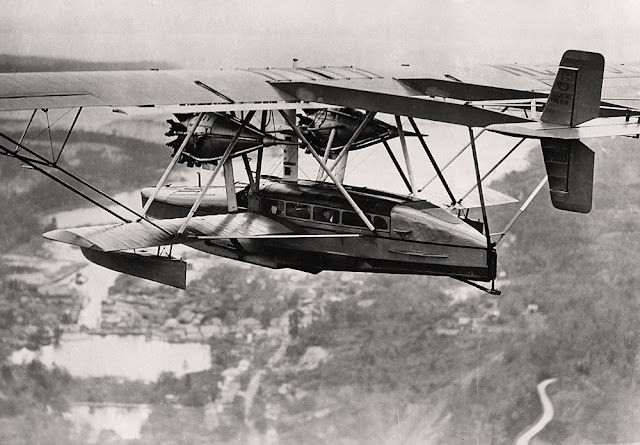 
As mentioned earlier, the S-38 was used by a few military air arms, including the United States Army Air Corps. Here's a fine shot taken in the San Francisco Area on January 17th, 1931 showing C-6A serial number 30-397, essentially an S-38A. This particular ship was operated by the 91st Observation Squadron based at Crissy Field, San Francisco, California. She was damaged just a couple'a weeks after this photo was taken, on February 2nd, 1931, after experiencing 'excessive porpoising' upon landing. The ship was repaired, but was scrapped two years later, in 1933. 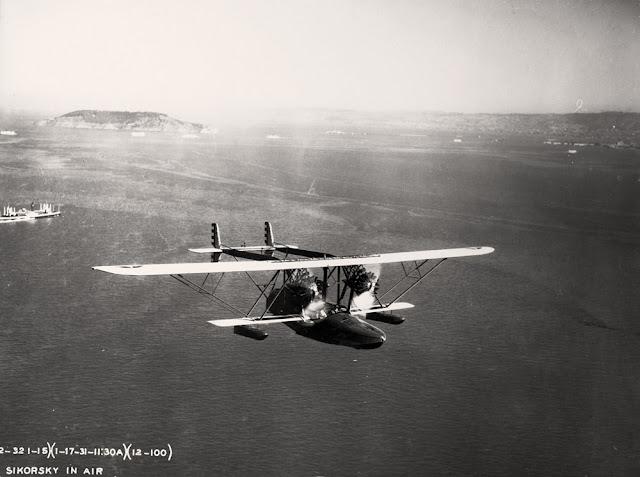 Even the Grim Reaper Spends His Summers in Florida

In this installment of 'TWW' we bring you a groovy shot of  'Gunfighter 054', an F-4N of VF-101 'Grim Reapers' leaving NAS Oceana in April of 1977. The Eagle-eyed among our readership of about half-a-dozen or so may notice not only the Bicentennial markings from the previous year, but also the unusual squadron designator, 'VF-101KW'. This identified aircraft assigned to the Reapers' permanent Key West detachment which served in an adversary role. 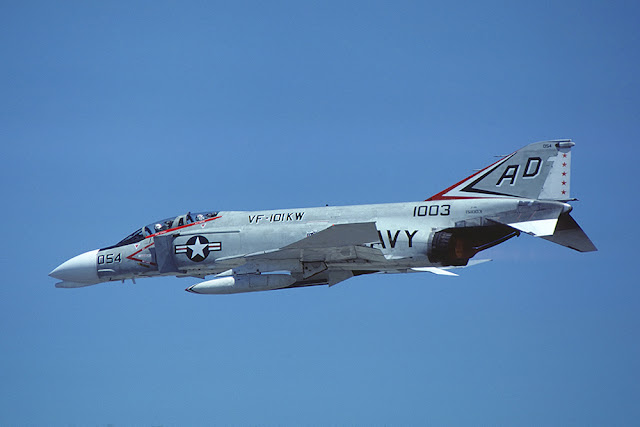 Incoherent rambling by Hawk914 at 8:47 PM No comments: