Today's installment of 'TWW' is a quickie... 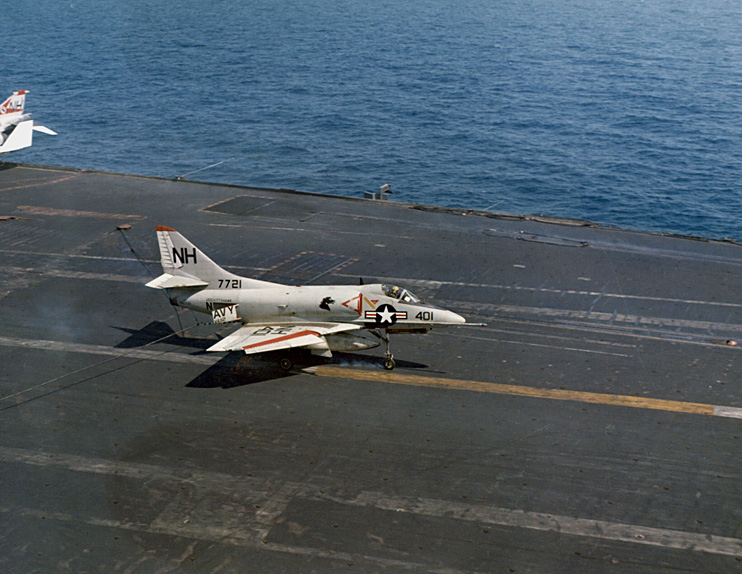 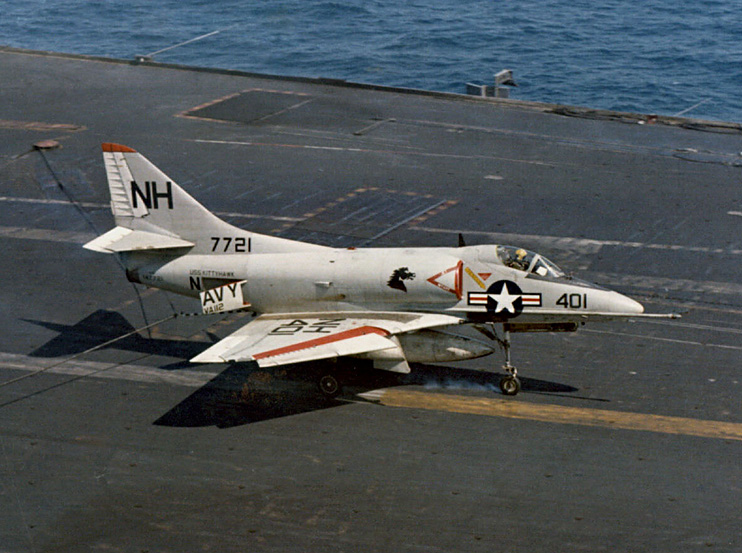 Goofiness aside... in late 1965 the U.S. Navy experimented with green camouflage paint, applying it to aircraft from at least three different carriers, Constellation, Enterprise, and Kitty Hawk, which were cruising around near an area that we shall refer to as 'SEA'... Southeast Asia.

This first image is rather crapola, but is good reference for any artists or modeler types out there in showing how the oil streaking out of the oil breather has removed the green paint from the rear fuselage and inner rear portion of the wings. 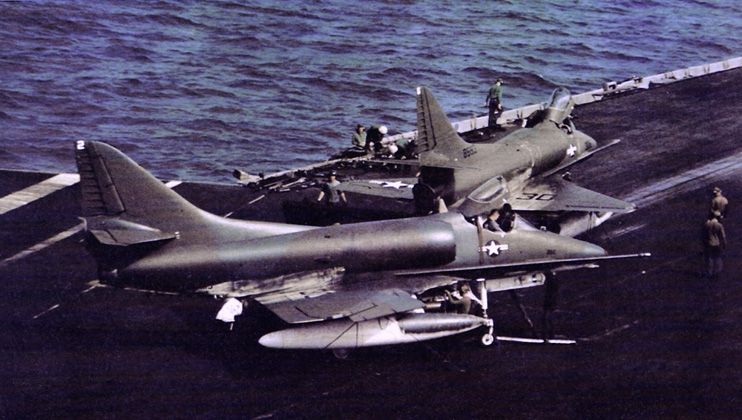 
Here's a nicer image showing A-4C BuNo.148458 of VA-113 about to trap aboard Kitty Hawk after dropping things that go boom on Victor-Charlie. This particular Skyhawk was retired to the boneyard at Davis Monthan AFB in 1975, but was later purchased by Singapore and re-manufactured by SAMCO (Singapore Aerospace Maintenance Company) as an A-4SU for the Republic of Singapore Air Force. 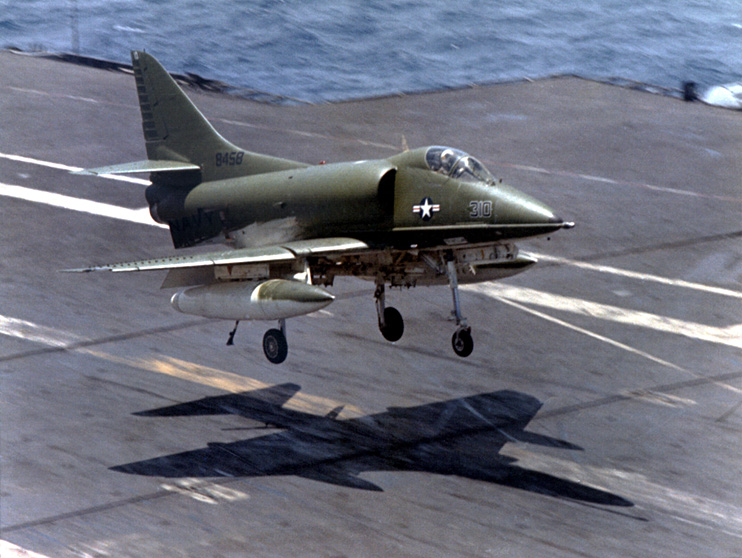 
The obvious point of trying out this camo was to make it harder for the enemy to spot our birds over the lush greenery of SEA. After a fairly short period of time, however, it was concluded that the only folks who were having any true difficulty in seeing the airplanes were the deck crew aboard the Navy's flattops during night ops, and that the 'protection' afforded by the camo in combat was negligible. So it wasn't too awful long before the green was removed and gull gray once more ruled the day.

The Tinker Toy With an Iron Hand

The A-4 Skyhawk was a true workhorse for the U.S. Navy during the Vietnam War. The type was in the thick of it from day one, all the way through to the end of the conflict... hauling things that go boom from the U.S. Navy's flattops to select locations in Southeast Asia.

Aside from serving as a plain 'ole bomb truck, the A-4 was also used in the SEAD role. (SEAD = Suppression of Enemy Air Defenses) The average wing-nut is likely familiar with the term 'Wild Weasel'... the moniker of the U.S. Air Force's SAM hunters. Less familiar to some might be the term 'Iron Hand' which, although a joint U.S. Navy / U.S.A.F. venture, is generally considered by many to be the U.S. Navy's equivalent of the 'Wild Weasels'.

Anyhoo, regardless of who was doing the 'hunting', the job was pretty much the same. Send a few jets ahead of a main strike force to flush out the enemy's air defenses... get 'em to light up their radar and then nail 'em with 'anti-radiation' missiles. This would either destroy the radar outright or force the radar operators to shut down for a bit, at which point the hunters, who have hopefully identified the radar and/or missile/gun locations, would move in to close the deal with rockets, CBUs (CBU = Cluster Bomb Unit), or a good 'ole fashioned strafing run, assuming the jets were gun-toters. Once this was done, the main strike force could move in and hit their targets with a somewhat heightened sense of security... and the 'hunters' would stick around until the main force was on its way home.

Hence one of the SAM-hunters' mottos; 'First in, last out'.

Well, now that we've given you a brief and basic outline of an ideal 'Iron Hand' (or 'Wild Weasel') mission, here's a look at an A-4 all gussied up and headin' out 'fersum SAM-huntin'... 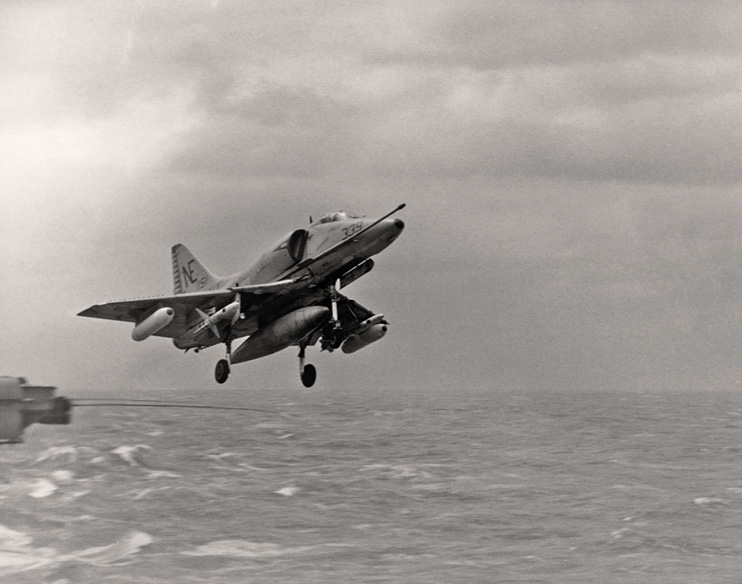 All in all, bad news for Charlie. 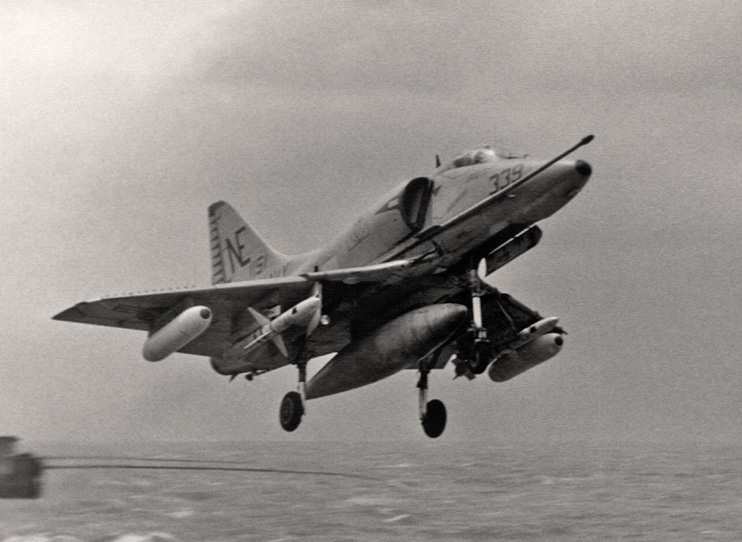 Incoherent rambling by Hawk914 at 4:29 PM No comments:

We continue our series on 'Heineman's Hot Rod' with this super-groovy shot of two VA-192 'Golden Dragons' Skyhawks doing what the A-4 did best... carrying things that go boom from 'point a' to 'point b'. 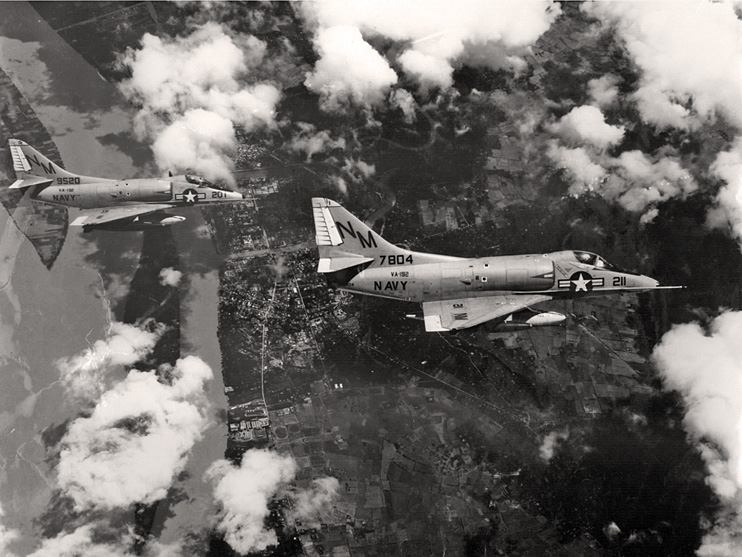 This jet was shot down by ground fire over South Vietnam on June 25th, 1968 while flying with VMA-223. The pilot ejected and was rescued. 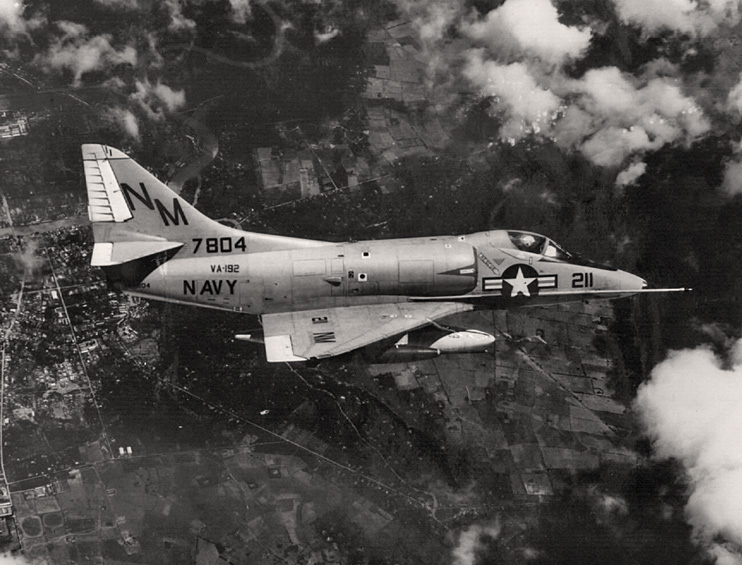 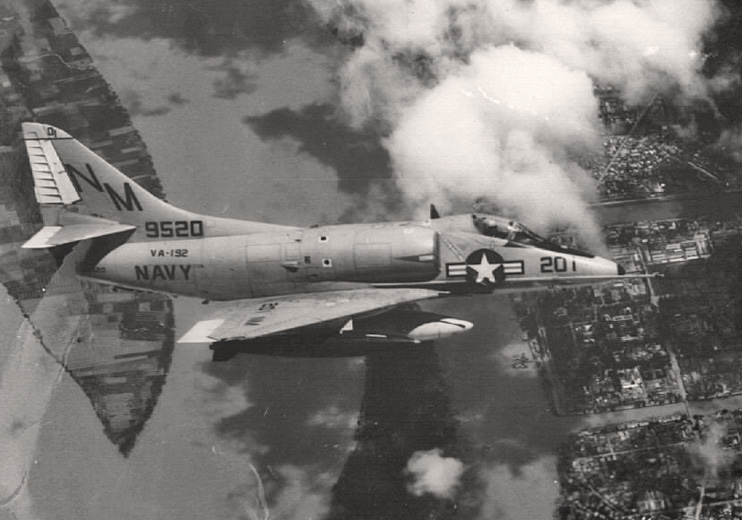 Incoherent rambling by Hawk914 at 9:01 PM No comments: