Oh, hey, look! It's another purty-pikshur we gots-for-ya today! Actually, a few of 'em...

This time the subject is an F-16C of the 77th Fighter Squadron, 20th Fighter Wing, which currently roosts at Shaw AFB, South Carolina. The 77th is one of the oldest squadrons still serving in the U.S.A.F. and is also one of your blogmeister's faves.

Anyhoo, the 77th FS jet shown here is F-16C serial number 90-0821. ('Tis a Block 50B airframe, for anyone who's keeping score.) In this first shot, taken on June 12th, 2012, she's just lifting off from Eielson AFB, Alaska for a sortie during 'Red Flag-Alaska 12-2'. This photo is pretty groovy for obvious reasons... shock diamonds blowin' outta the pipes almost always make for a pretty picture. But this Viper is also pullin' some vapor off the strakes... 'twas obviously a humid day... and that adds just a bit more to the grooviness factor. 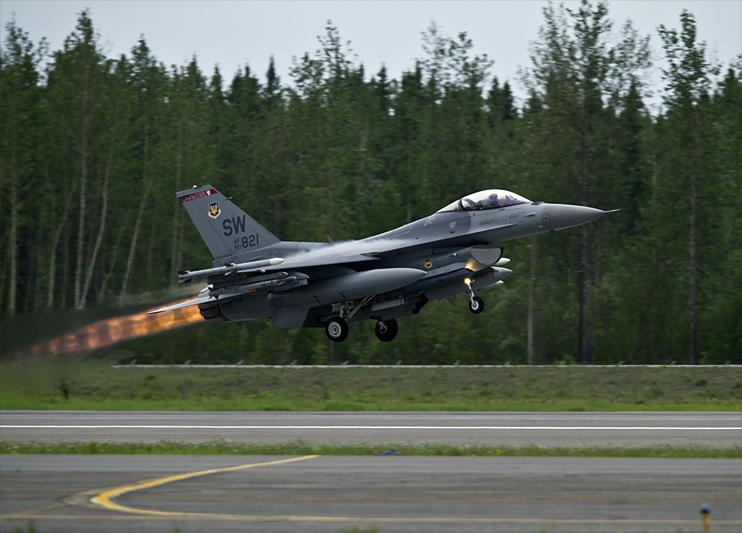 
This second shot, also taken during 'Red Flag-Alaska 12-2', shows '821' high above the Alaskan wilderness. Looks like she's decked out for the SEAD role, with that HARM under the port wing. The date on this shot was June 20th, 2012. 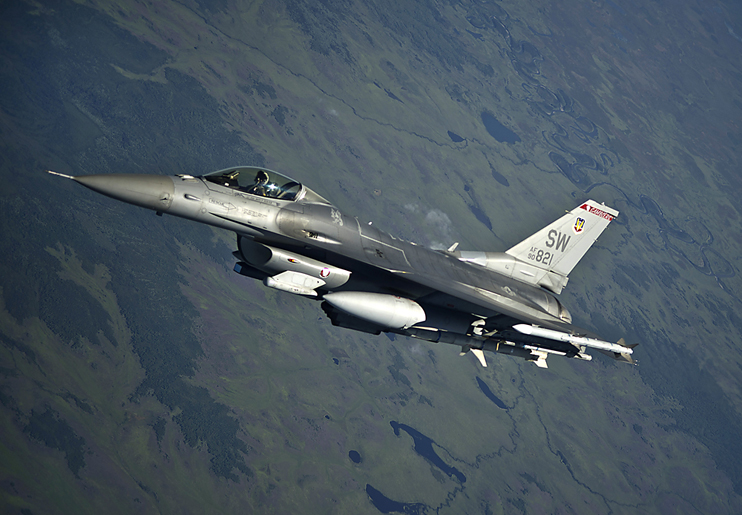 
We wanted to give ya'll a look at either the 77th's emblem, carried on the air intake, or their fin flash... or both. Well, during an admittedly brief web search, we were able to find only one suitable photo, showing the latter... and guess which jet it is? Yep, 'ole '821'. We love it when a plan comes together... even when that plan was laid out by Lady Luck with no help from us... 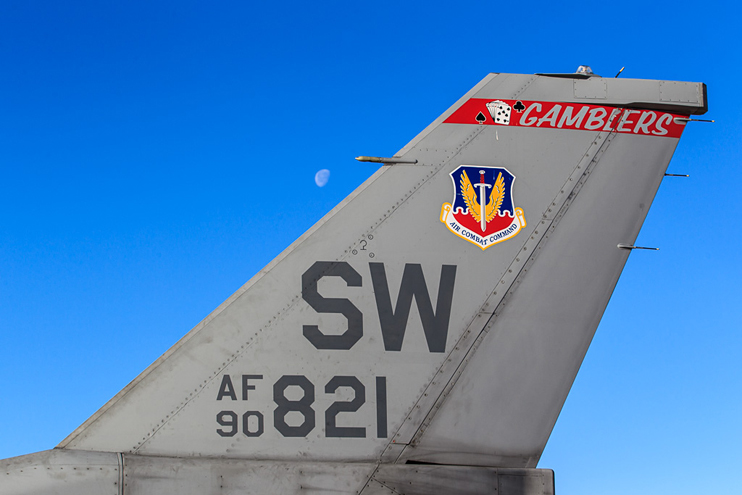 Incoherent rambling by Hawk914 at 7:25 AM No comments:

Here at 'TWW' we're sometimes a bit slow... and we just realized now that today is 'Black Friday'... or, Friday the 13th.

So in light of that fact we present you with a somewhat appropriate 'TWW' 'extra'...

This here's a Grumman F7F-3N Tigercat... with the 'N' in the designation identifying this 'Cat' as a nightfighter. 'Twas the U.S. Marines who used this variant of the Tigercat primarily and, as such, they were painted black... hence our use of the term 'Black Cat'. (Yeah, yeah, we know that the ship in the photo is, in all likelihood, actually painted dark sea blue or some such... but, as we just figured out that it's Friday the 13th and this was the nicest shot of a Tigercat nightfighter that we could come up with on such short notice... and it's a black'n'white image... we figure, 'close enough'. So work with us here, will ya? kthxbai) 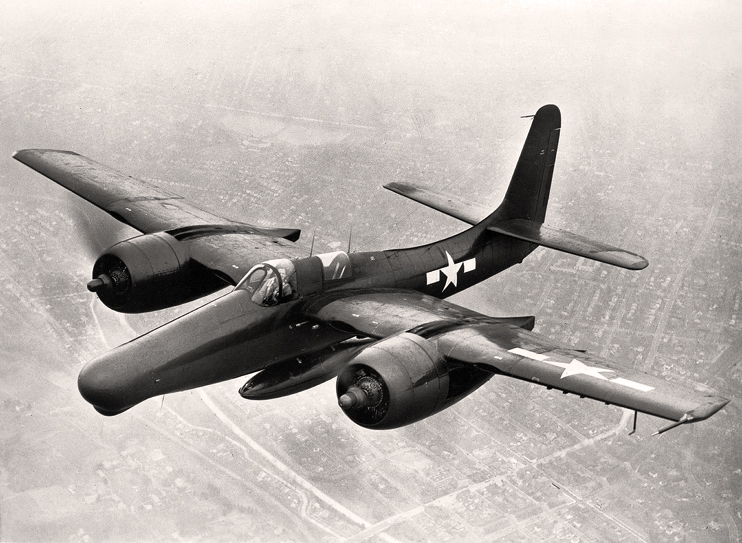 Incoherent rambling by Hawk914 at 9:18 AM No comments:

We've said it before... here at 'TWW' we love purty-pikshurs... and today's installment fits that bill admirably.

We don't know much about this photo... only that a KC-135 from the 911th Air Refueling Squadron is bartending for a thirsty B-52 and that someone inside the BUFF has turned on the cloud machine. Oh, and some rich guy in his yacht is photobombing the whole thing... albeit not in particularly spectacular fashion. 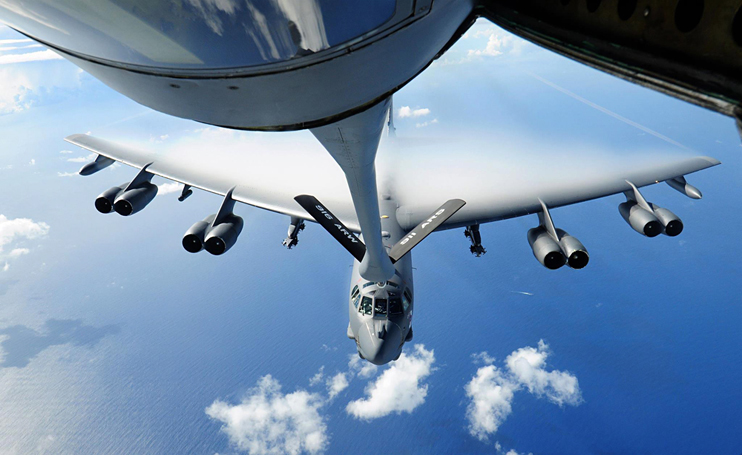 Incoherent rambling by Hawk914 at 7:11 AM No comments:

Back in nineteen-hundred and twenty-eight the folks at Boeing took a look at one'a their PW-9D pursuit ships... United States Army serial number 28-41 to be exact... and said, "We can do better". So they yanked the ship's Curtiss D-12 engine, replaced it with a Curtiss V-1570 Conqueror and, viola...

The result of this conversion was a reduction in weight of some 75 pounds and an increase in speed of about 17mph or so over the PW-9D. Unfortunately this was about all the remaining potential to be coaxed out of the original Boeing Model 15 design and no further P-7s were produced.

With testing finished the XP-7 was converted back to PW-9D configuration, and 'ole 28-41 soldiered on with the U.S.A.A.C. for a few more years before being destroyed in a takeoff accident on September 4th, 1931 while serving with the 43rd School Squadron at Kelly Field, Texas. 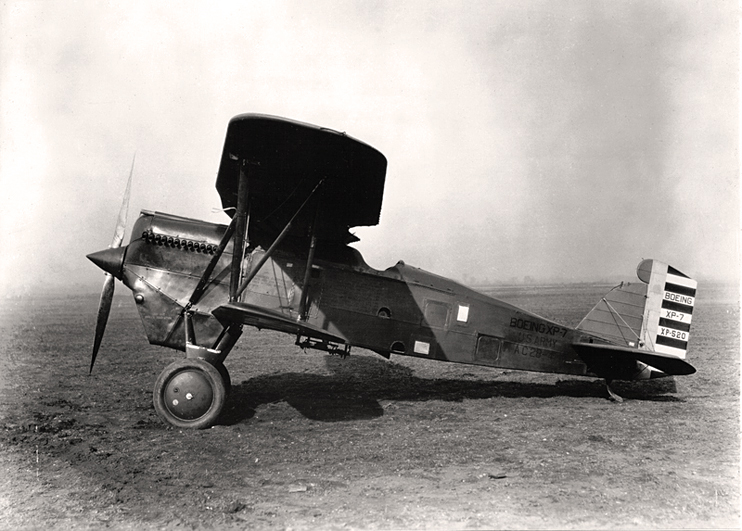 Alrighty... we're thinking that some of you, the readership of about half-a-dozen or so, are probably getting tired of the A-4 by now. Can't really blame ya'll, so we're going to put our Skyhawk series on the back burner for a while... after we share one last photo.

This time it's an A-4E from VMA-224 'Bengals', just seconds away from leaving terra firma at Chu Lai Airbase, on its way to visit Charlie and drop off some gifts. The date was September 24th, 1966. 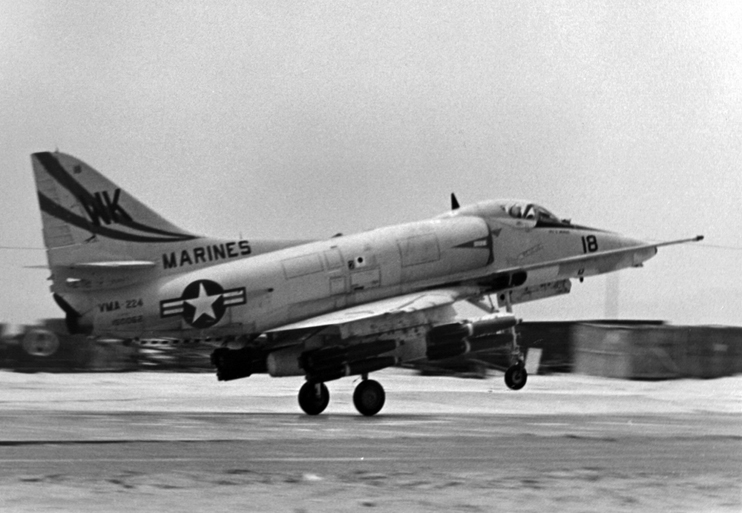 
Although we're putting our series on the A-4 to bed for a bit, there's plenty more to come in the future... so keep 'yer eyes open.

Incoherent rambling by Hawk914 at 8:34 AM No comments:

Returning to our series on the A-4 Skyhawk...

The 'Flying Ubangis' of VA-12 had as their squadron emblem a skull blowing 'kisses of death' to the enemy. Who says war ain't romantic? 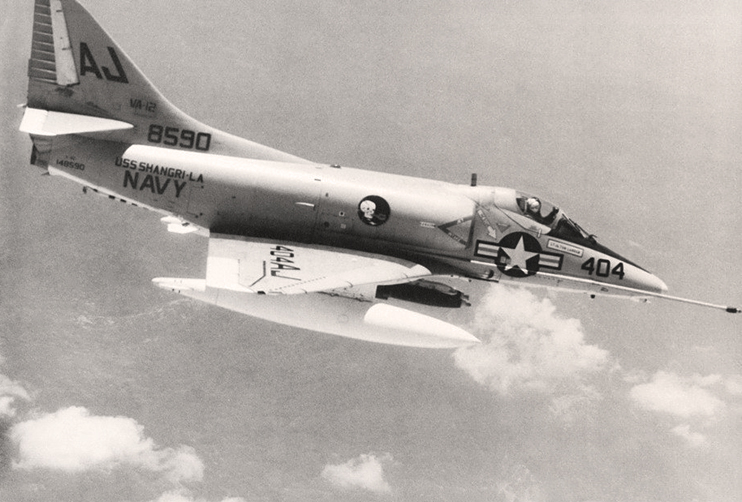 
And here's some color shots of VA-12 Skyhawks taken at NAS Atsugi, Japan on July 16th, 1970 during the same cruise... starting with two views of the CAG bird. 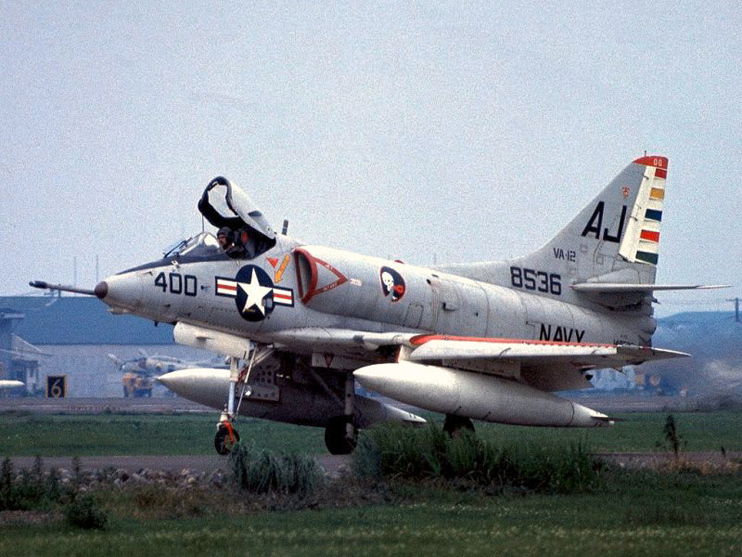 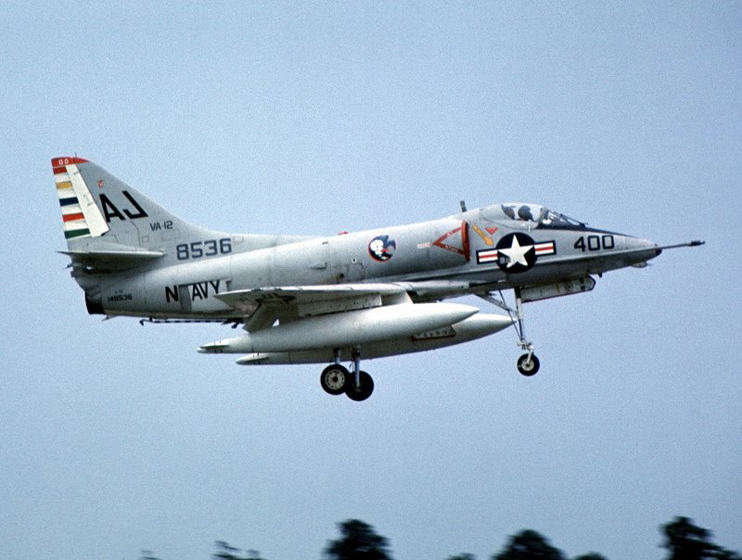 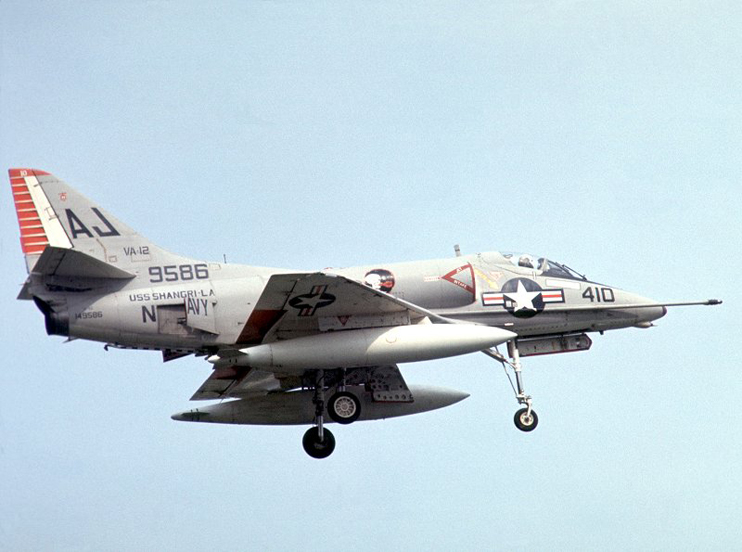 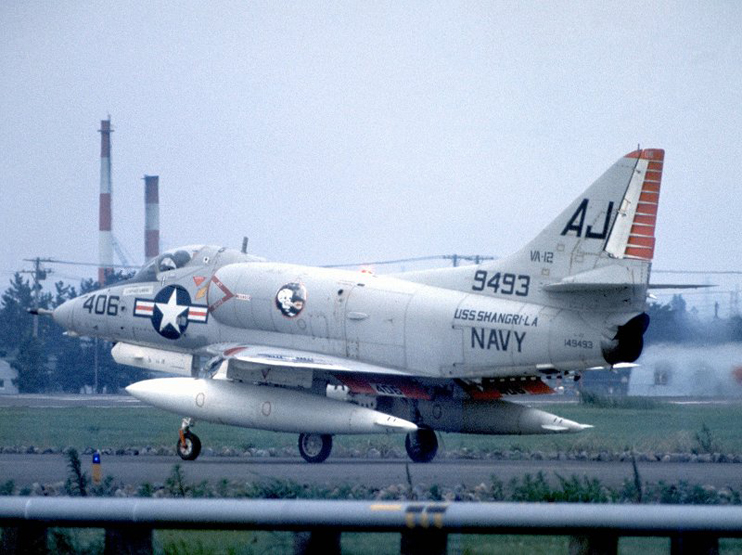 Still taking a break from A-4s... and perhaps beginning a new recurring series on mascots...

Today we bring you a photo of Major Edmond 'Buster' Goolsbee, Operations Officer of the 406th Fighter Squadron, 371st Fighter Group, sitting in the cockpit of his P-47 in 'Jolly Old England' during the Second World War.

Keeping Major Goolsbee company is a furry little feline friend... we don't actually know this little kitty-kritter's name, but we've dubbed her, somewhat appropriately, 'Frisky'... as that was the 371st FG's nickname. 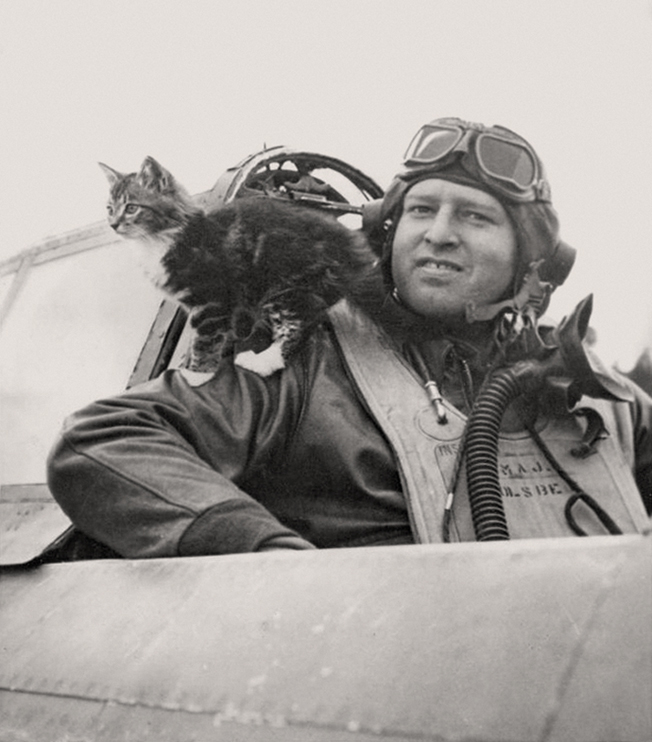 Incoherent rambling by Hawk914 at 9:36 AM No comments:

An Osprey and the Eagle

A quickie today, and a break from Scooters...

Here's a super-groovy shot of a Hawker Osprey of 407 Flight, FAA with HMS Eagle in the background. 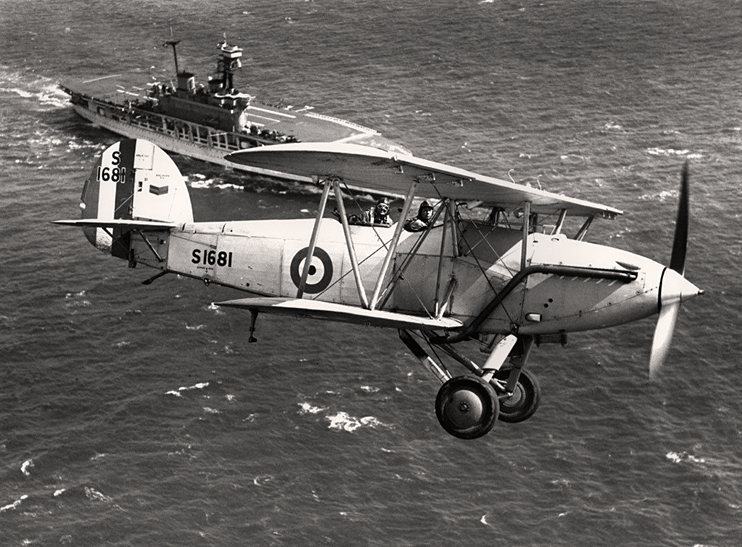 Incoherent rambling by Hawk914 at 9:12 AM No comments:

Today we bring you a couple'a more photos of Leatherneck Skyhawks... this time the outfit is VMA-225, known as the 'Vagabonds', and the photos were taken during their time at Chu Lai during the Vietnam War. You can see many other photos documenting VMA-225's time at Chu Lai HERE... 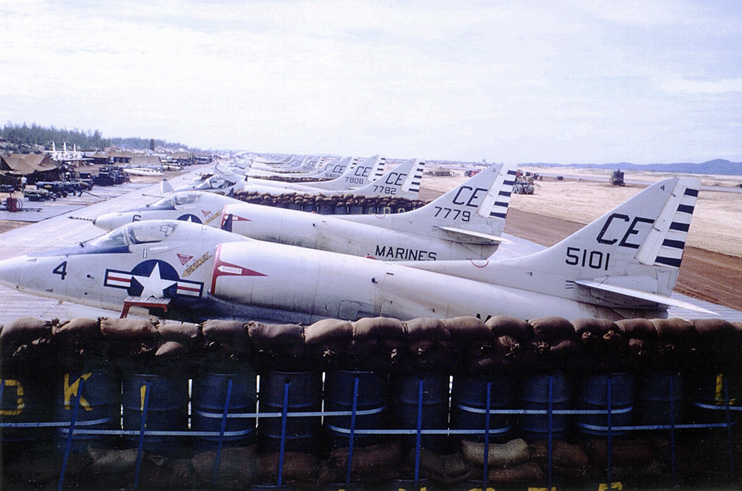 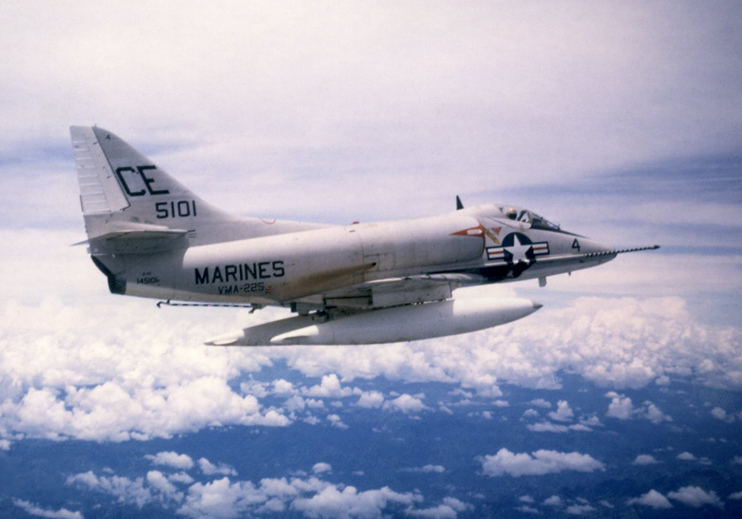 State of the Art

Today we present a quickie... tis another shot of Skyhawks, and personnel, of VMA-121, the 'Green Knights', presumably taken at MCAS El Toro, California. The exact time-frame is unknown, but the jets look to be fairly new A4D-2s, so we're guessing it's sometime in 1958 or 1959.

Also, we don't know exactly what's supposed to be going on here... four ground-bound 'Green Knights' are shown, two of whom are messing around with a Zenith 'Trans-Oceanic' shortwave radio. (Cutting-edge electronics for the day!) Maybe they're tuning in to a radio comedy, or maybe pulling in some rockin' sounds from a Californian DJ... who knows for sure... 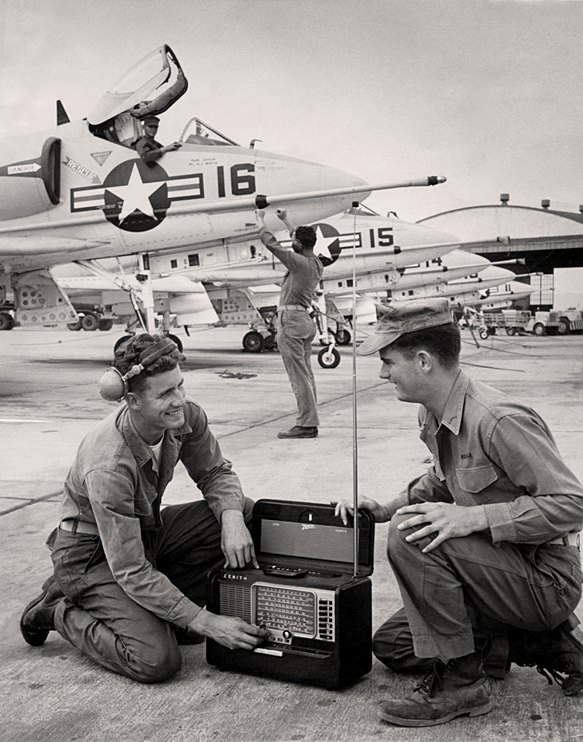 Incoherent rambling by Hawk914 at 1:01 AM No comments:

Anyhoo, that last installment was itself a bit of a break from the series we had been running on the A-4 Skyhawk. Much as we like the 'Bantam Bomber' around these parts, sometimes a little variety is called for. So, with this installment, we pick things up where we left off in our Scooter series. (For all you Phantom Phanatics out there, don't fret... we'll undoubtedly have more for ya'll further on down the line.)

Up to now we've concentrated on Skyhawks of the U.S. Navy. Well, the U.S.M.C. also flew the type. And today we present a few photos of  Leatherneck Skyhawks... specifically those operated by the 'Green Knights' of VMA-121. This outfit converted to the A4D-2 from the Grumman F9F-8B Cougar in late 1958 and became the first Marine Corps squadron to fully qualify for 'special weapons' delivery. (read; nukes)


The 'Green Knights' deployed aboard the USS Coral Sea (CVA-43) as part of Carrier Air Group Fifteen for a WESTPAC cruise that began on September 19th, 1960 and ended on May 27th, 1961. This photo shows A4D-2 BuNo. 142938 ready for launch from the Coral Sea's waist catapult. Note that this jet, and presumably the rest of its squadron-mates, retained its normal tail code, 'VK'. More often than not, while deployed aboard a carrier, Marine squadrons adopted the tail code of the Navy air group/wing that was embarked. 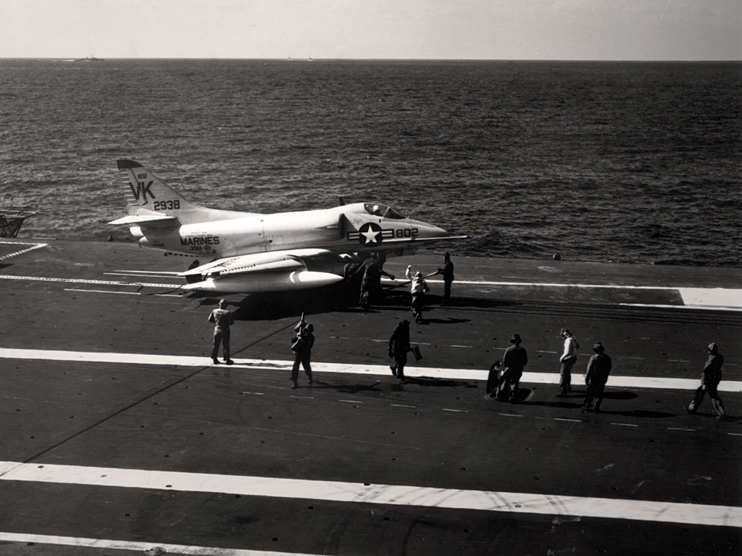 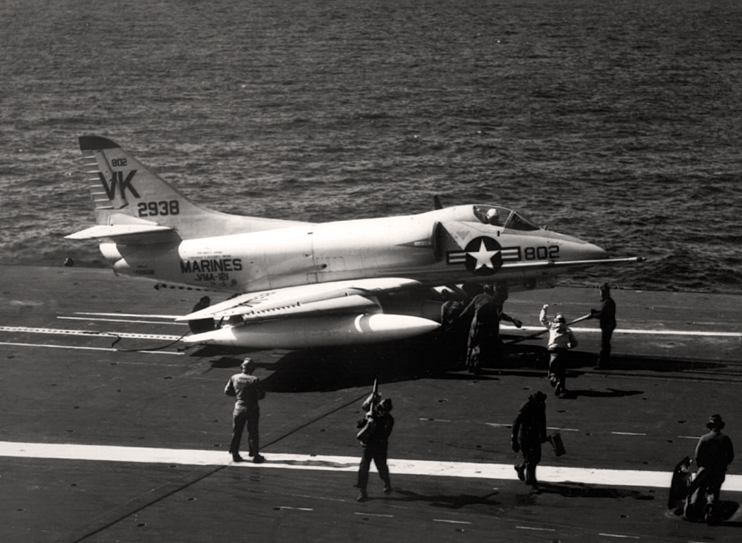 
In this next shot, taken high above MCAS El Toro on June 21st, 1961, we see a four-ship of 'Green Knights' Skyhawks. These jets were brand-new A4D-2Ns (later re-designated A-4C) which had been delivered to the squadron over the previous few months. 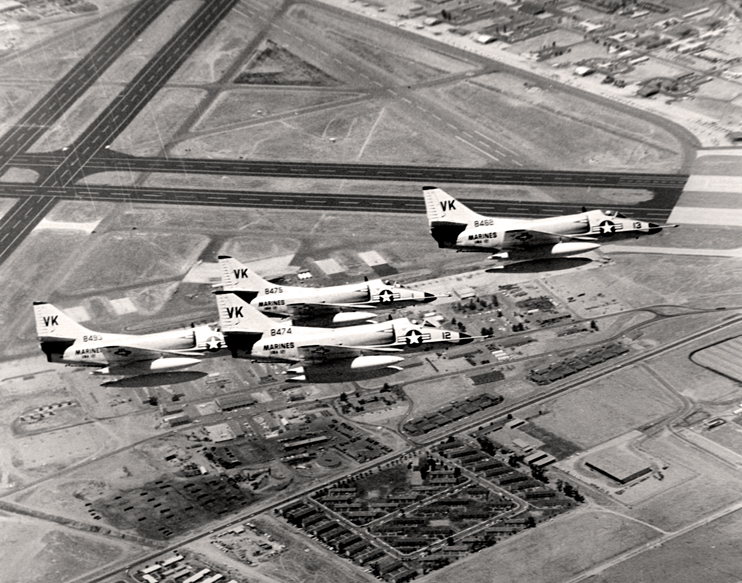 
As mentioned in an earlier installment, the A-4 was a veritable workhorse for the U.S. Navy during the Vietnam War, and the same is true for the Skyhawks of the U.S.M.C. The 'Green Knights' saw action during that conflict and operated from Chu Lai Airbase near the city of Tam Kỳ in the Quảng Nam Province from December of 1966 to June of 1967, and again from September of 1967 to January of 1969.

We wrap up this installment of 'TWW' with a couple'a shots of VMA-121 Skyhawks departing Chu Lai, on their way to deliver things that go boom to Charlie. 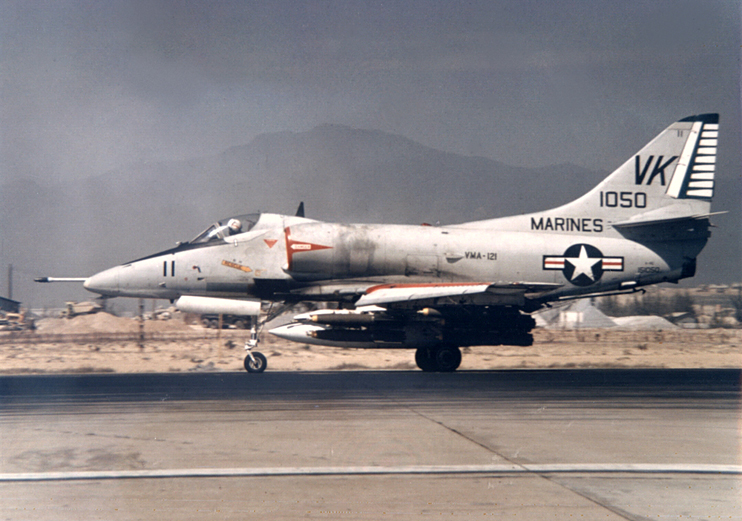 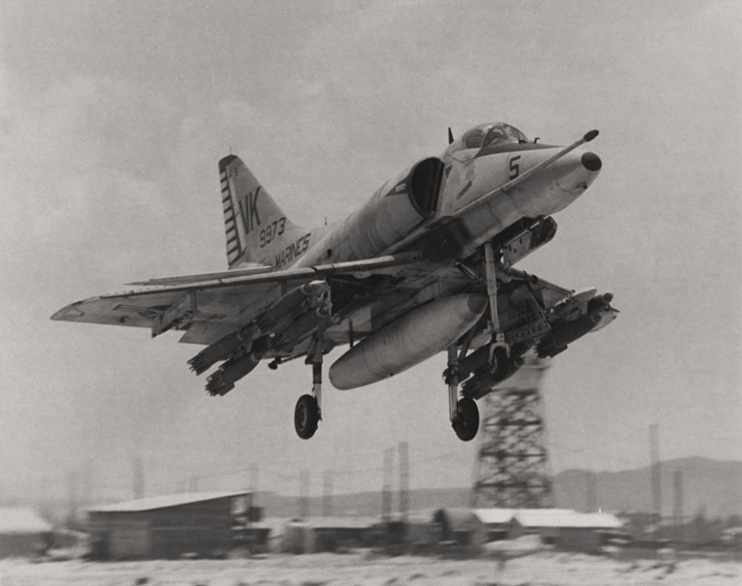 
More Skyhawks on the way...

Incoherent rambling by Hawk914 at 8:58 PM No comments: